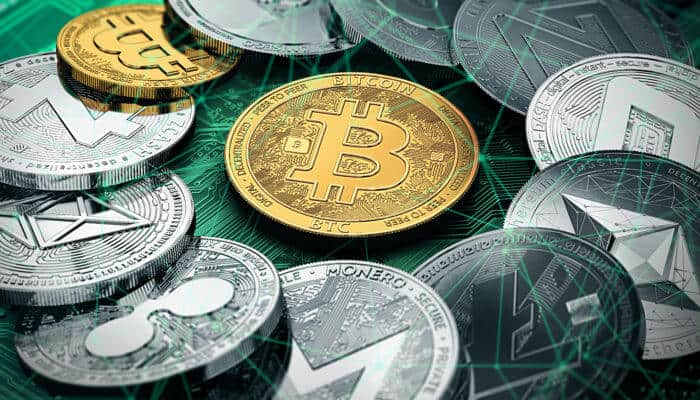 It’s been a bit of an on-off week for those buying bitcoin, with bullish exhaustion rearing its head, as the territory north of $9,000 proves a stretch.

Nevertheless, the recovery from sub $8,200 at first sight appeared impressive, with the bitcoin price recovering rapidly to trade again in the $8,700 region by week’s end.

But the fear of a brewing pullback last week has come to pass today, with bitcoin currently down 7% at $7,900, with other leading alts following it lower.

There’s been plenty of market-moving news elsewhere in crypto this past week or so, with the long-awaited “major” announcement from Block.one on developments on the EOS platform perhaps top of the pile.

The trouble with priming the market to expect big news is the danger that the news doesn’t match expectations.

That’s what seems to have happened with the news that EOS is coming to Coinbase and it’s launching a social network app called Voice.

EOS’s dev community was underwhelmed, and so were its bagholders in equal measure.

Block.one, the effective lead developer of EOS, didn’t address any of the key issues affecting the developer community, chief among them the cost of deploying applications on the network.

Beyond betting apps, EOS dapps have failed to gain traction. To be fair neither have those on any of the other platforms, be it Ethereum or Tron.

But in the case of Tron, at least it recently put some of its own money behind an incubator to kickstart development.

There has been no such largesse from Block.one, which may have disappointed some, especially given its $4 billion ICO and the fabulous returns earned by investor insiders of 2,000%-plus.

Worse still, the Block.one social media product is still in beta, so apart from signing up to receive news about the project there’s not much else to impart.

The main let down for EOS developers was that there is to be a Voice token, which will be distributed to new sign-ups but despite the transparency claims and user-centric data ownership the block producers will be the power behind the throne, or in fact the throne itself.

However, the use of blockchain based identity checking. Aims to guarantee that there really is a human being at the keyboard and not a Russian robot  could be an innovation that sets it apart from the Web 2.o incumbents.

Dan Larimer the chief technical officer at Block.one has something of a reputation for starting stuff and moving on before the baby has grown up. That was the case with BitShares and arguably Steemit too.

The EOS price had fallen 15% (as of 3 June) since the announcement leaked on 1 June.

In other news, the war of the bitcoin clones rages on.

Since the fork from Bitcoin Cash (BCH), Bitcoin SV (BSV) has been making up for lost time. Investors who decided to buy bitcoin cash (BCH) had until recently been winning the tussle of the bitcoin forks.

Following the Bitcoin Cash split into competing chains in November last year BSV has slipped behind its rival in value terms.

The growth spurt was helped along by the news that supporter Craig Wright successfully registered the copyright for both the bitcoin whitepaper and the source code.

Initial interpretation of the news wrongly inferred that the US Copyright Office had in some supported Wright’s claim to be Satoshi Nakamoto, the pseudonymous name of the inventor of bitcoin.

The price more than doubled after CoinGeek broke the story, which, it might be claimed, span the news to make the erroneous inference.

CoinGeek is owned by Calvin Ayre, the billionaire who made his money in the gambling business and is also an enthusiastic backer of the Bitcoin SV project.

Ayre later brought attention to the ongoing court case in Florida in which the estate of Dave Kleiman is suing Craig Wright alleging theft of one million bitcoin.

He seems to think it’s a sure bet that Wright will win the case and come into possession of the bitcoin. Here’s the tweet

wonder what happens to #Bitcoin (#BSV), Segwit Coin BTC and alphabet Soup coin (ABC/BCH/BAB) when #CraigisSatoshi gets his million coins once Tulip trust vests Jan 2020 and he dumps Segwit and Alphabet and buys Bitcoin? Things that make you go hummmm? 🙂

Ayre says the bitcoin will be sold for BSV, crashing the price of bitcoin and sending that of BSV to the moon, to borrow a much-loved crypto phrase.

While many coins were trading lower at midday yesterday (Monday 3 June), BSV was 11% higher for any one of two reasons – either Ayre has been buying or others in the market with less deep pockets in the expectation that the price will soon be mounting a spectacular rally.

Beyond, the crypto twittersphere, the nChain engineers working on BSV have made strides towards delivering 1GB blocks. nChain is owned by Wright, and the project released a press statement claiming to have successfully tested the 1GB blocks, one of which handled transactions in excess of 300,000. But being on the testnet, the nature of these non-realworld transactions is not necessarily a sign of how such blocks will perform in production.

What’s going on at Coinbase as managers leave?

There’s been a lot of coming and going at Coinbase – actually mostly going.

First the president and chief operating officer Asiff Hirji left after being in post for just 18 months.

Hirji came to Coinbase with the kind of experience a crypto exchange craves – she was formerly the chief operating officer at TD Ameritrade, one of the US’s big four stockbrokers.

The departure of Hirji, who is being replaced by Emillie Choi, the vice president of business data and international, follows the exit of several other key executives.

Coinbase’s chief technology officer Balaji Srinivasan left in May and the head of international, Dan Romero, a month before.

There are even rumours that the VP of operations and technology will be leaving soon too.

It could be nothing and just sheer coincidence that so many apparently key managers are jumping ship. Then again it could be because they know something that we don’t.

Just as equity investors like to follow the buying and selling of company shares by directors, so crypto investors should keep an eye on personnel changes for straws in the wind. Has Coinbase’s growth plans gone awry as the crypto winter catches up with it?

Probably yes to some extent in terms of the collapse in trading by retail, but its institutional business has been growing. Perhaps it is the struggle to adjust to the different shape of the market that is reflected in the departures. From that perspective then, change is good.

Check out our review of Coinbase here.

Although it didn’t much help the XRP price, Ripple has been in the news again, this time via the Money Tap app which is built on top of the company’s xCurrent technology

SBI Ripple Asia, a subsidiary of Japan’s SBI Holdings, is planning to test the app shortly for in-store payments, with the aim of the service going live later this.

Money Tap is a money transfer app that lets user transfer funds with nothing more than a telephone number or QR code. It provides what it says is instant payments for its customers that have accounts with partner banks.

Money Tap  has 13 of Japan’s banks working with it as founding partners and is registered as an electronic payments agent in the country.

Ripple’s xCurrent technology does not use XRP, hence the lack of impact on the token price. XRP is currently trading at $0.4101, down 4% over the past week.

Ripple’s escrow policy has attracted some criticism in the past, with Coinmetrics recently saying it found “several important discrepancies” in Ripple’s reporting.

In December 2017 Ripple placed 55 billion of the 100 billion XRP supply in escrow in the interests of transparency and releases 1 billion every month.

Ripple for its part said the supposed discrepancies were in fact “timeline” issues, according to David Schwartz, Ripple’s chief technology officer in a 19 May tweet.

If you have some XRP on an exchange here are some Ripple wallets.

In the past week Kik launched its Defend Crypto campaign to raise funds to take the SEC to court. Ted Livingston the chief executive of messaging app Kik has contributed $5 million to kickstart the crowd fundraiser as the company vents its growing frustration with the US Securities and Exchange Commission for its slow response and lack of clarity on whether or not the Kin (KIN) native token of Kik is a utility token or security.

The SEC had previously hinted that it the Kik ICO in 2017 may have been a security sale and that its thought to have held back the price. A court case is looming but the fight has wider implications as it affects the whole industry, hence the crowdfunding approach. Circle is an early supporter.

Kin is priced at $0.000036 and has been slipping down the market cap rankings. It is now in 168th place, despite the token being one of the most used, which could make it a good bet if you think the SEC will back off.