Where To Buy Otherdeed For Otherside NFTs: All You Need To Know

Otherdeeds NFTs have created a buzz in the market due to the involvement of several well-known NFTs in the single 'Otherside metaverse.' Should you buy Otherdeeds NFTs? Read ahead to know what our experts have to say. 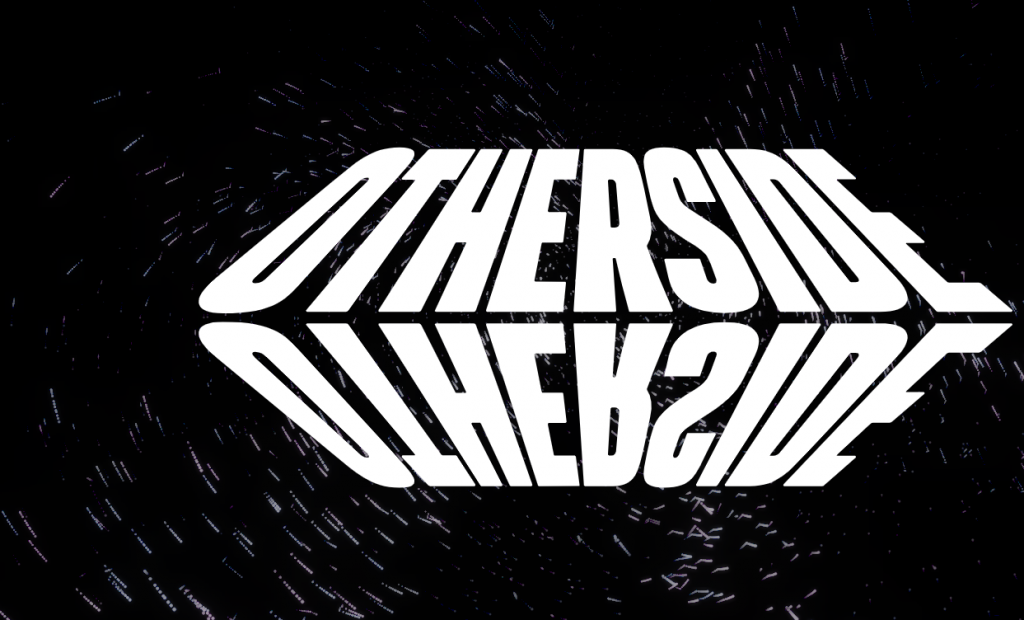 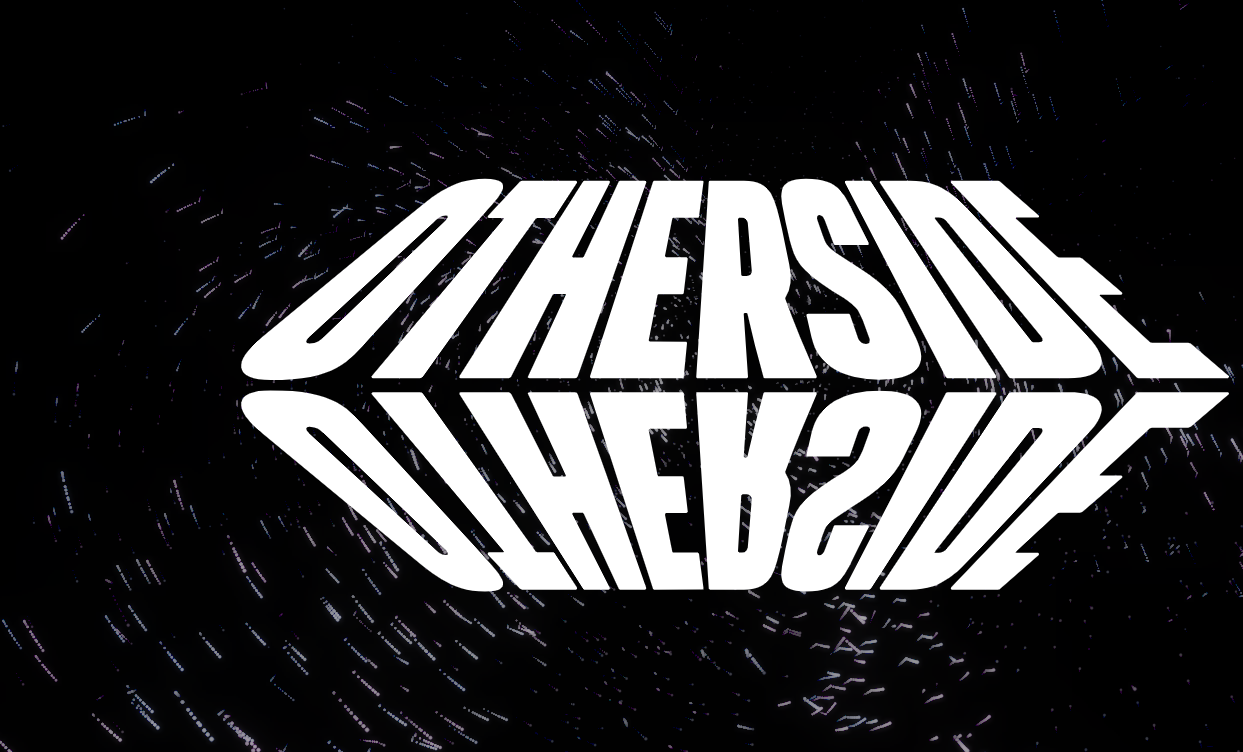 The Otherside Metaverse is trending for the last few days, and for all the right reasons.

The Bored Ape Yacht Club has been expanding and getting bigger. Yuga Labs, the crypto media firm, facilitated the launch of one of the biggest events in the NFT and metaverse space yet.

Yuga Labs had given a hint about Otherside earlier in March. On March 18, 2022, the company’s official Twitter account tweeted, “See you on the Otherside in April.” The teaser attached along with the tweet was watched more than 1.8 million times. It was an exciting launch as Bored Ape was launching its first metaverse project.

So, after a lot of speculation and a few obstacles before the final launch, the Otherside project is here.

But what exactly is Otherside? What should you know about Otherdeeds, and where can you find them? Read ahead to find out all about Otherside NFTs by The Bored Ape Yacht Club.

What is the Otherside Project All About?

Otherside is considered one of the most hyped and largest launches and projects by The Bored Ape Yacht Club.

Since the launch announcement in March 2022, the NFT space and crypto enthusiasts got to learn a little about the Otherside from the leaked pitch deck of the project.

The deck by the Yuga Labs mentioned how the company wanted to “build something that expands the universe of the BAYC but also invites the larger NFT community (and those priced out of BAYC membership) to join.” 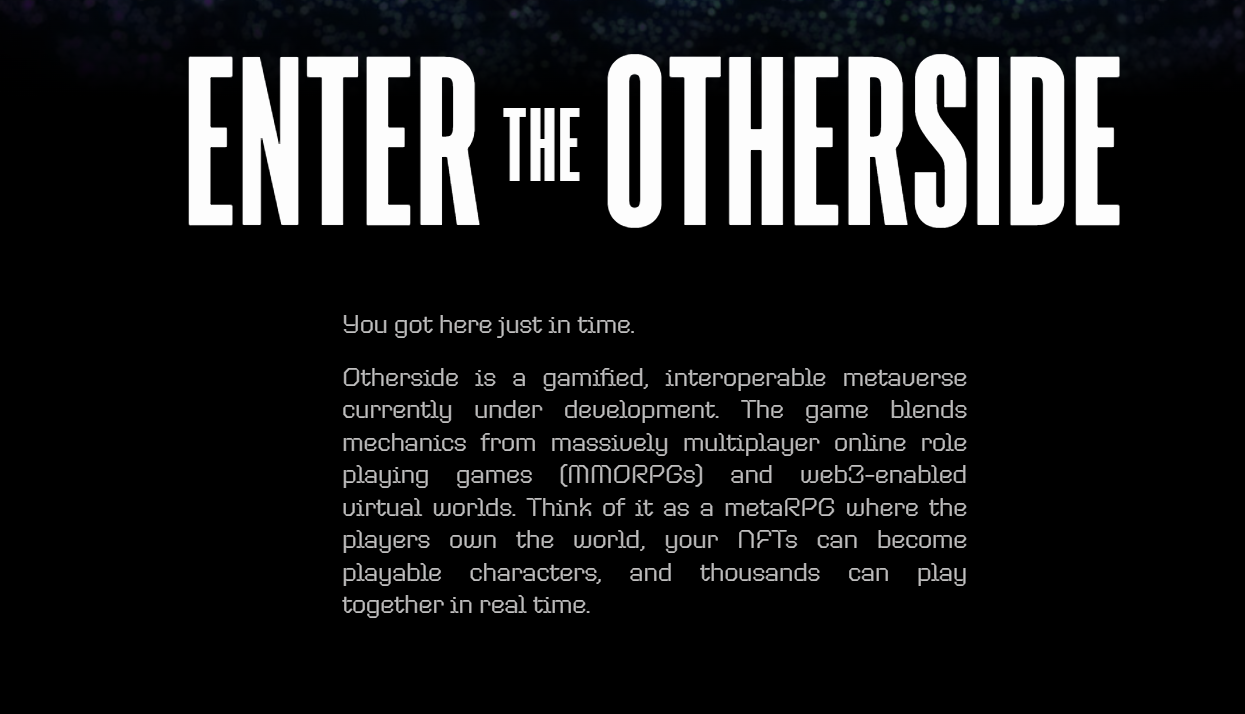 Otherside is a 3D metaverse that provides a gaming format for Bored Ape NFT holders. The metaverse will be powered by Ape Coin. An announcement about this project was made a day after Yuga Labs launched the Ape Coin (Ticker Tag: APE), which is said to have a prominent role in the functioning and operations of Otherside.

What is the Otherside?

The Otherside is a Massively Multiplayer Online Role-Playing Game connected to the Bored Ape ecosystem. It is a combination of multiplayer gaming and the functionalities of Web3.

The players will be able to own their land in the world, NFTs can be transformed into characters, and all of this can be done by more than 10,000 players who are playing at once. 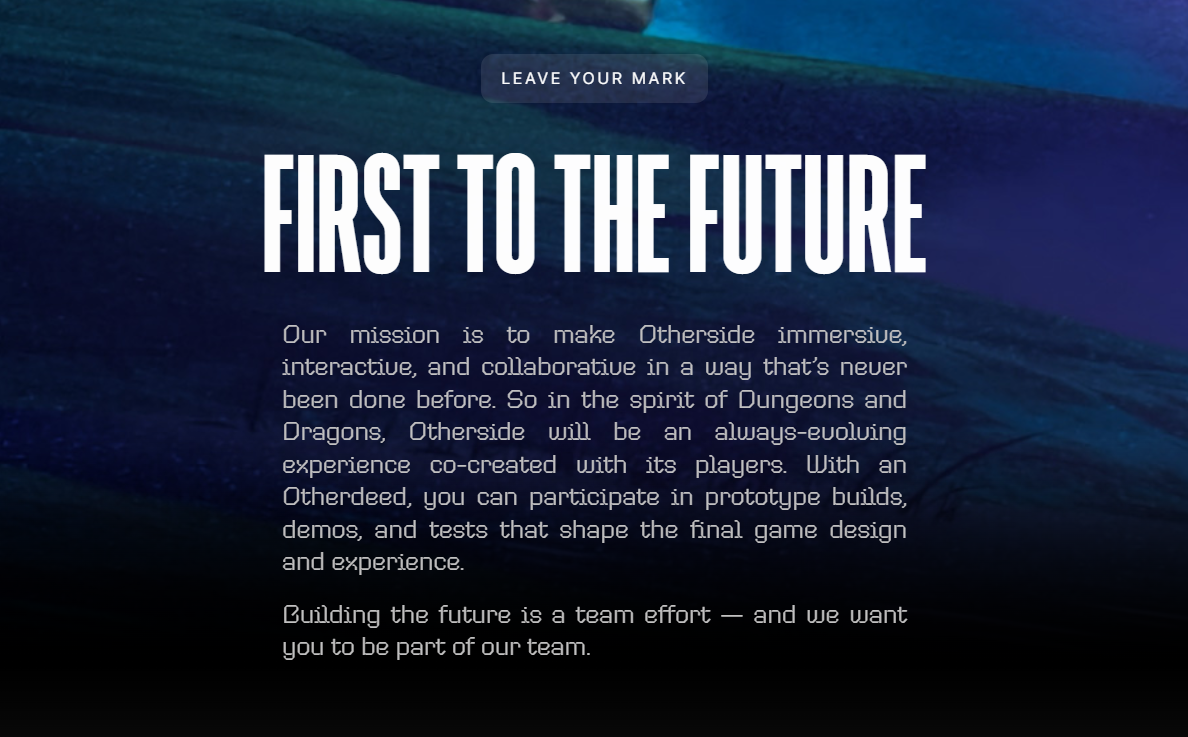 To add to the hype, many other popular NFT projects like World of Women are included in the ecosystem. The Yuga Labs have said a few things about Otherside, that might give a clearer picture of what to expect from this project. Here are a few of the features:

While the picture isn’t much clear, it certainly has increased the expectation of the crypto crowd. If there is one certain thing that we can say about Otherside, is that the Yuga Labs’ recently launched cryptocurrency Ape Coin ($APE) will have an integral role to play in the Otherside NFTs.

Otherdeeds is the key to claiming land in Otherside. As of writing this piece, Otherdeeds by Otherside is listed on top of the list- ‘Top collections over 24 hours.‘

Otherdeeds are a collection of NFTs, which were created with the sole purpose to contain all the elements of the Otherside game. The Otherdeeds NFTs have been kept dynamic, and come with a unique element of the game, with some of them (very rare) consisting of a Koda.

These Kodas are essentially living beings “that have ushered us into the Otherside”. This story knitted by Yuga Labs seems to have been kept a little hazy intentionally. As if the users should know about Kodas, but not about what their purpose is or why they exist.

Details about how Otherdeeds NFTs would be distributed

The Otherdeeds went live for the public on April 30th, 2022, which were 55,000 parcels of land. Being a BAYC owner is beneficial because out of 100,000 Otherdeeds, 45,000 of them are reserved for Bored Ape NFT holders, and Yuga Labs employees and partners.

As mentioned above, these Otherdeeds have the ability to be dynamic, changing with a user’s activities within the game.

Where to Buy Otherdeeds?

Otherdeeds have been launched, and are still being launched in a series of launches.

The Otherdeeds auction was earlier decided to be a Dutch Auction. These auctions have historically been used to prevent high gas fees, which arise as a large number of users tend to mint their NFTs all at once.

However, after receiving a lot of backlash about using a Dutch Auction, Yuga Labs decided to launch Otherdeeds in a series of waves, to keep the gas fees in control.

This is how it was explained by the team- “At the start of the sale (wave 1), there will be a limit of 2 Otherdeeds minted per wallet. As soon as gas returns to reasonable levels and the amount of wallets minting decelerates, wave 2 will begin, during which KYCed wallets can mint up to an additional 4 Otherdeeds. Each increase in the per-wallet limit will be announced on the Otherside official channels.”

The sale didn’t go as planned, and never went beyond the first wave of launches. 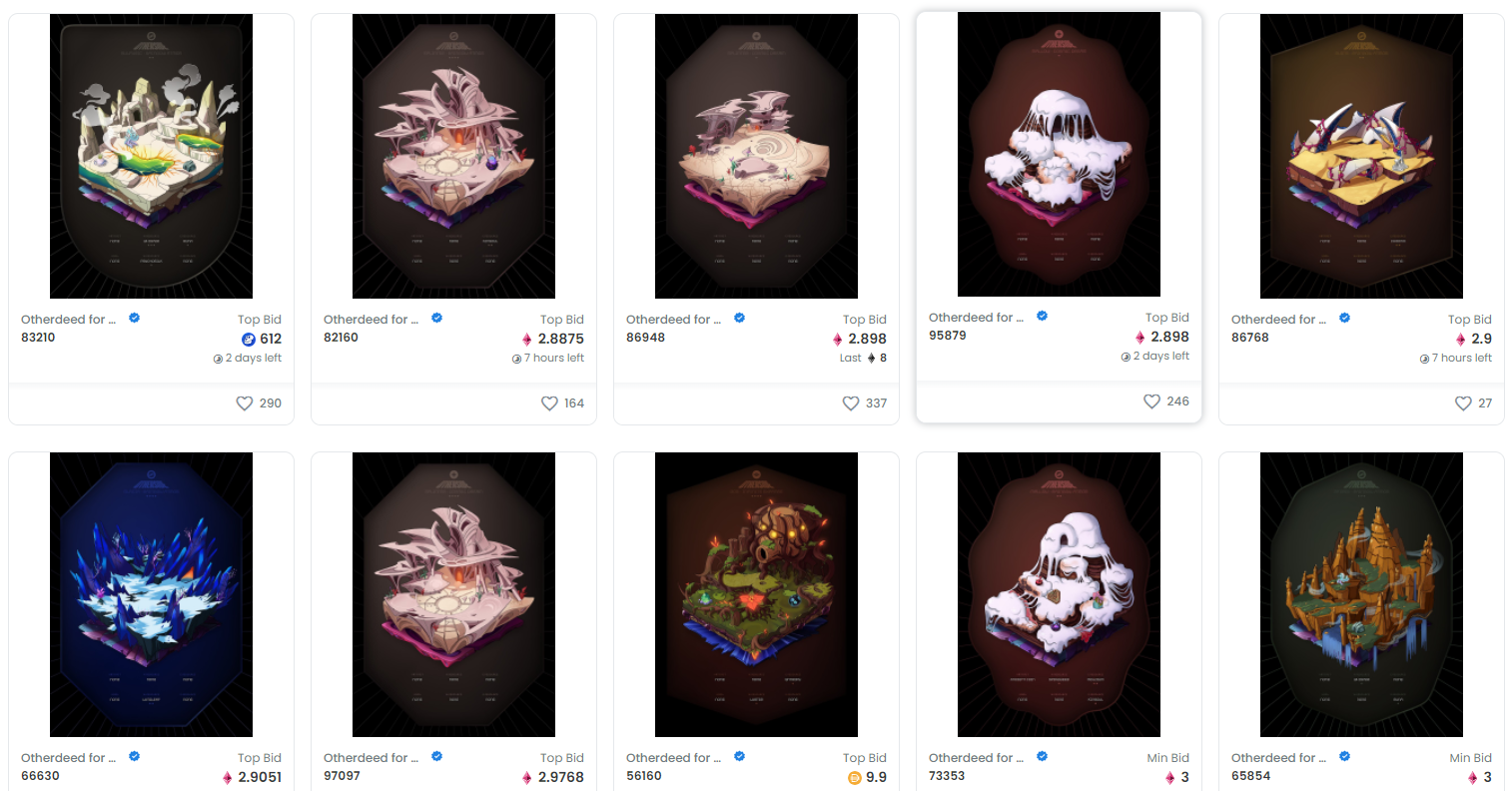 The cost of each Otherdeeds was kept at 305 $APE, (around $6,100 at the time of launch and $3,800 at the time of writing). Still, the high price didn’t deter the buyers, and the gas prices didn’t drop a lot. Many investors lost upwards of 1-2 ETH as a result of failed transactions.

The Yuga Labs team accumulated $300 million in revenue from this launch. The team at Yuga Labs responded to the users who lost their cryptocurrencies during the launch.

“We’re sorry for turning off the lights on Ethereum for a while. It seems abundantly clear that ApeCoin will need to migrate to its own chain in order to properly scale. We’d like to encourage the DAO to start thinking in this direction,” said Yuga Labs in a tweet about the incident.

As per the latest reports, Yuga Labs finally refunded the amounts to the users after the launch day debacle.

How Can You Buy Otherdeeds NFTs?

While there has been no news about another launch by Yuga Labs, many users have listed their Otherside NFTs on secondary top NFT marketplaces such as OpenSea. 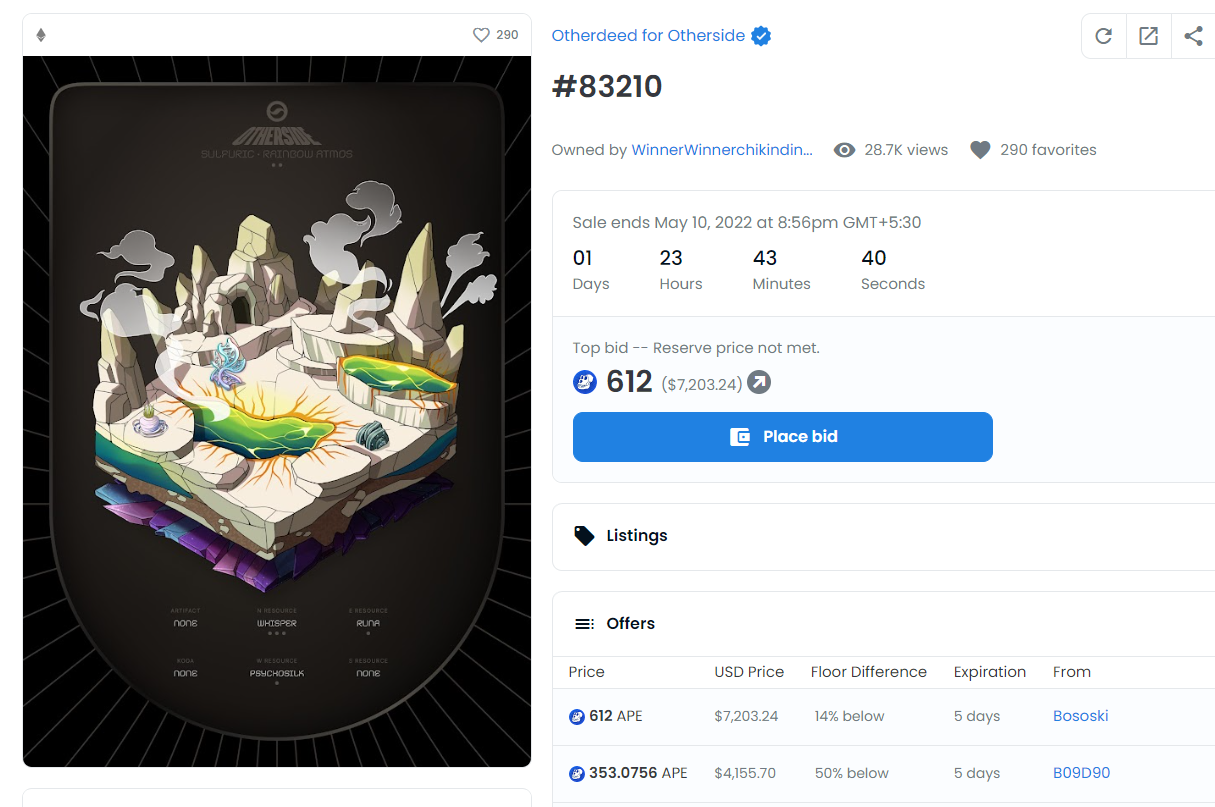 To buy an Otherdeed for yourself, you can go to NFT marketplaces and purchase the NFT by using the crypto wallet as mentioned by the marketplace. Here are the simple steps to follow to buy land on the Otherside:

Will Otherside Continue The BAYC Popularity?

Considering it is a Bored Ape Yacht Club collaboration, there’s a lot to expect from Yuga Labs and Otherside as a project.

The Otherdeeds have already reached 34k owners and considerable market capitalization. Yuga Labs has also made it clear that it still considers the partnership between them and BAYC very important.

Thet Bored Ape Yacht Club has made a name for itself in the Non-fungible tokens space. With pop culture popularity, celebrity owners, and staggering prices with decent returns on investment, BAYC has become a leader in the NFT space.

Yuga Labs has been working closely with BAYC now. The Otherside project, which includes BAYC’s major involvement, can certainly see a rise in its popularity. One thing to take note of however, is that since launch of the otherside, the prices of $APE have gone down from their all-time high to $12.43 (Coinmarketcap.com) – most likely because of the issued that occured during the launch.

The rush during the launch day, and the failure of the Ethereum blockchain system to fulfil the minting requirements of the overexcited crowd, shows that Otherside will continue to gain popularity.

Conclusion: The BAYC is Expanding, Be a Part of It

If you are someone who has been wondering a lot about NFTs but hasn’t entered the NFT space yet, this might be the time.

The $APE coin by Yuga Labs has a strong story and background behind it. And the company has bigger plans for the future. The Yuga Labs’ deal with Larva Labs will give it access to some of the most popular NFT collections like Meebits and CryptoPunks. At the time of the deal’s announcement, the valuation of Bored Ape Yacht Club rose to a staggering $5 billion.

Bored Ape Yacht Club has come a long way since its inception. Every time it seems like the users are losing their confidence in BAYC, they come up with a better idea to expand or innovate their offering to their users.

The Otherside is one such innovation. Going for it will depend on your financial ability and a bit of due diligence. It’d be better to wait and observe closely as Yuga Labs makes another move before investing into the Otherside.