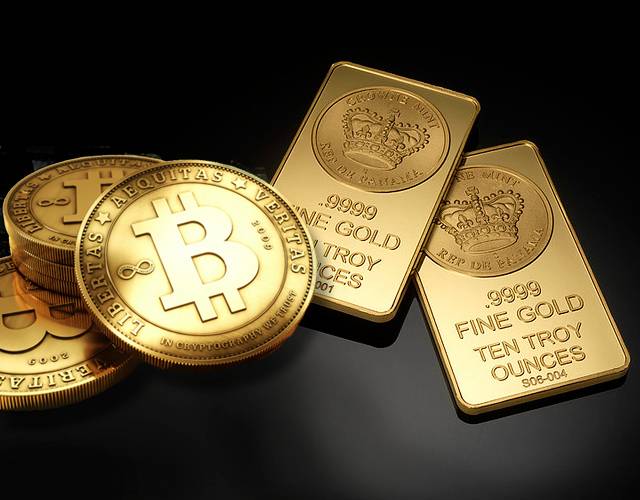 NEW YORK (InsideBitcoins) — Gold is considered one of the best ways of storing value. And for thousands of years, that has remained the case. At the Bloomberg bitcoin summit a few weeks ago, Barry Silbert suggested that the future of value storage was bitcoin. Whether that is the case or not, more than one-third of the total gold supply — trillions of dollars worth — is held in storage.

But the problem is, gold as a currency is impractical — trying to buy groceries or paying rent with physical gold can be a bit of a challenge. With today’s announcement of Bitgold, Bitreserve has made it possible for users with physical gold to transact with bitcoin.

A different kind of “gold card”

When Bitreserve launched, it offered what were called bitdollars, biteuros, bitpounds, etc. When bitcoin is sent to your “Dollar Card,” the platform automatically converts the bitcoin into fiat currency.

“When your bills are in dollars, you have to hold your cash in dollars, or you’re risking, depending on how much money you have, you’re putting yourself at risk,” Halsey Minor, CEO of Bitreserve, told Inside Bitcoins.

Beginning today, users of the “cloud money system” can hold their bitcoin as gold — and spend their gold as bitcoin. By giving the Bitreserve Gold Card address to whomever is paying, the system automatically transfers the bitcoin you receive into gold at whatever the prevailing transfer rate is.

“One of the reasons we launched gold is because people feel gold is money, not actual dollars,” Minor explained.

Buying a plane ticket with gold

Once a user has gold, they can then use it for transactions, completely bypassing fiat currencies. Since the Gold Card has its own address, the gold will be converted to bitcoin and then transferred to whomever you’re engaging in commerce with.

“We want to turn cryptocurrency into things that people use for commerce.”

Bitreserve says it holds physical gold bullion in a vault that coincides with the amount of gold that is currently on the system. For example, if you hold 10 oz of gold, it is guaranteed that there is a corresponding amount in the vault.

“We want to turn cryptocurrency into things that people use for commerce,” Minor explained. “Everything we do is about giving people multiple forms of home currency and comfort in the way they hold their currency.”

Minor told the story of traveling to Sardis, Turkey — believed to be the physical location where the concept of money originated. He used his gold Bitreserve card to buy the airline ticket. “It was one of the most profound moments in my entire business career,” he said.

Why bitreserve and not credit cards?

Consider an American consumer making an online purchase from a merchant  in London. To the U.S. buyer, the transaction is in dollars, their home currency. But of course, to the merchant in England, they are thinking about the purchase in pounds. No one has to worry, though, because the currency is automatically converted.

Minor explained that there is a typical 10% fee for the credit cards to make this conversion. Bitreserve charges 0.45%. And because a person can pay from dollars to pounds using bitcoin as the intermediary, it’s as seamless as using a credit card. By allowing someone to pay in USD and have that automatically convert to a Euro for the merchant can eliminate credit card fees as well as minimize the conversion fee.

“We want to let people who live in dollar land or euro land or pound land to go to the world of bitcoin and be able to transact,” Minor said. “Its utility is for exchange.”