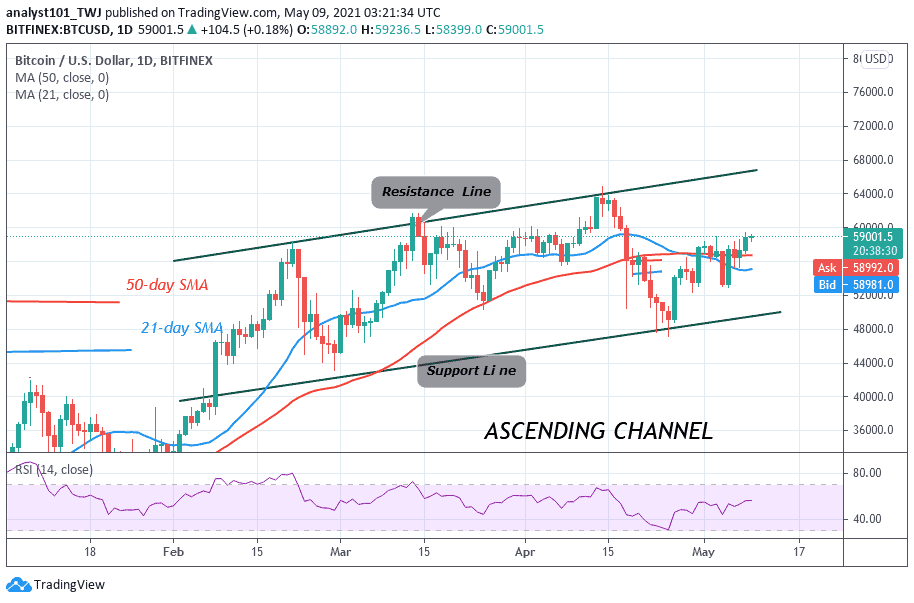 Bitcoin (BTC) Price Prediction – May 9, 2021
Bitcoin bulls have broken above the $58,000 resistance but the bullish momentum could not be sustained. Today, BTC/USD traded as price reached the high of $59,450. The king coin is likely to retrace to $57,000 low if the bulls fail to break the $60,000 psychological price level.

Bitcoin price has now been rejected three times at the $60,000 resistance level. Buyers made frantic efforts to sustain the bullish momentum above the recent high but were repelled by overwhelming selling pressure.

Consequently, Bitcoin has resumed a downward move as a result of a strong rejection at the resistance of $59,200. The current retracement will extend to the low of $57,000.

Nevertheless, if price breaks below the $57,000 support, the market will continue the downward move. That is, the selling pressure will extend to the low of $53,000. On the upside, if price retraces and finds support above $58,000, the upside momentum will resume.

Andrew Bailey is the governor of the Bank of England who has warned crypto investors of the inherent dangers of cryptocurrency investment. The governor argued that cryptocurrencies lacked intrinsic value.

The governor said: “I would only emphasise what I’ve said quite a few times in recent years, [and] I’m afraid they have no intrinsic value. I’m sorry; I’m going to say this very bluntly again: Buy them only if you’re prepared to lose all your money.”

Bailey’s comments come at a time when crypto markets are characterised by a huge spike in prices. In addition to bitcoin, major altcoins such as Polkadot, Chainlink and XRP have also seen strong price actions.

Bitcoin at risk of further downside

Bitcoin risks another downward correction as the king coin faces stiff rejection at the $59,450 resistance. The Fibonacci tool has already indicated a marginal upward move of Bitcoin and a possible reversal.

On May 1 uptrend; a retraced candle body tested the 78.6% Fibonacci retracement level. The retracement indicates that Bitcoin will rise to level 1. 272 Fibonacci extension or the high of $59,819.90. From the price action, BTC price has reached a high of $59,450 and has commenced a downward move.