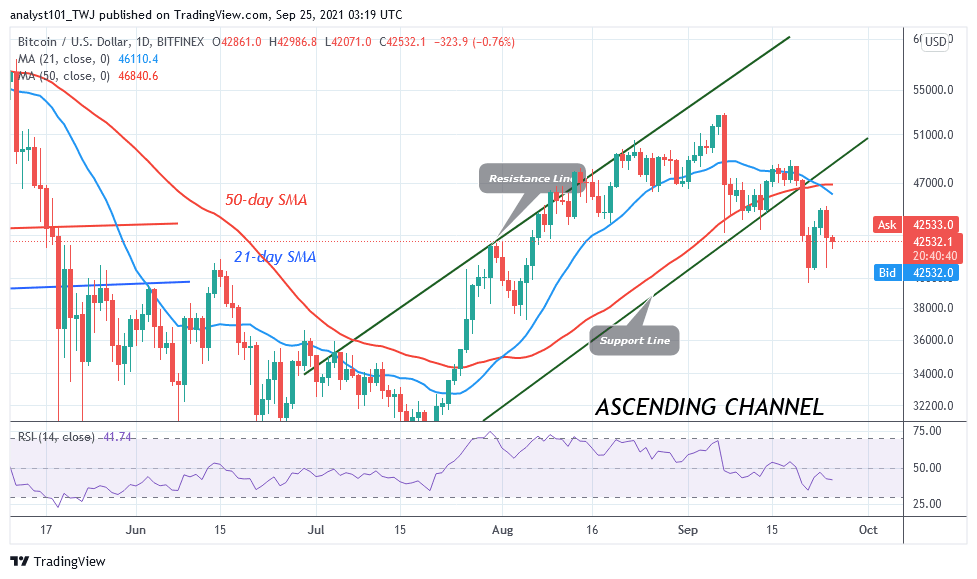 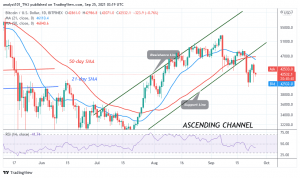 Since September 21, BTC/USD has been fluctuating between $40,000 and $45,500 as it attempts further decline.The bulls have defended the $40,000 price level consistently. The bears have retested the current support on two occasions but were repelled. The bears have an advantage over the bulls as Bitcoin trades in the bearish trend zone. The crypto is trading at $42,731 at the time of writing.

About 48 hours ago, buyers pushed Bitcoin to the previous highs but were repelled at the $45,500 resistance. Today, BTC price is falling to retest or break the $40,000 psychological price level. For the past five days, the bears are finding penetration difficult below the $40,000 support. On the downside, a break below the current support and the subsequent continuity of the bearish momentum will sink BTC’s price. Conversely, if the current support holds, Bitcoin can equally revisit the previous highs. Buyers will have to overcome the $48,000 high with sustained bullish momentum. The RSI period 14 is at level 42 which indicates that Bitcoin is in the bearish trend zone and capable of falling on the downside.

The Chinese central bank has warned that the adoption of cryptocurrencies like Bitcoin posed a major challenge for the traditional financial system. According to an executive of the Chinese central bank, Wen Xinxiang, there is sustain growing popularity of cryptocurrencies and fiat-pegged stablecoins. Wen Xinxiang indicated that Bitcoin’s market value is over $800 billion and the total stablecoin market capitalization is above $120 billion. Also, Wen outlined major risks associated with the crypto market payment. Firstly, the crypto industry is capable of operating separately from the traditional payment system offered by commercial banks and payment institutions. Cryptocurrencies also create issues for the payments services by banks and incapacitate the power of clearing organizations. Secondly, the anonymity of cryptocurrencies makes them an attractive tool for facilitating illegal transactions such as money laundering.

Meanwhile, Bitcoin is falling after rejection from the $45,500 high as it attempts further decline. It has broken the previous low of $43,220. The bears are bent on sinking BTC’s price to the low of 38,000. Meanwhile, on September 7 downtrend; a retraced candle body tested the 61.8% Fibonacci retracement level. The retracement indicates that the BTC price will fall to level 1.618 Fibonacci extension or level $37,373.40. 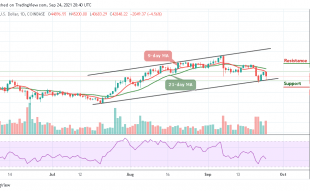