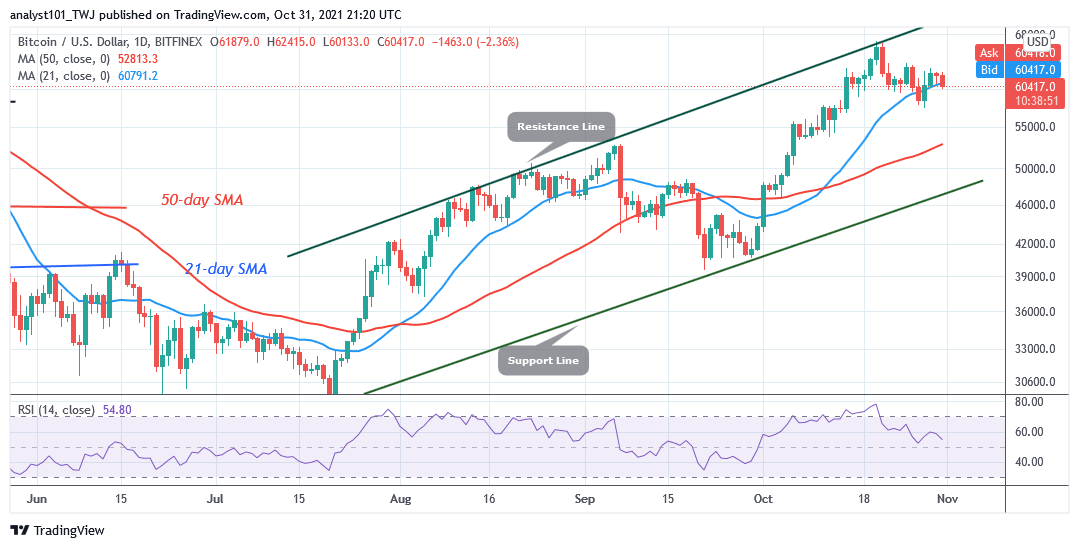 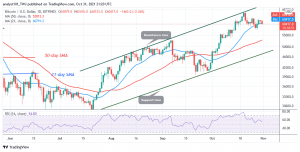 For the past four days, BTC/USD  has been fluctuating between $60,000 and $63,000 as Bitcoin trades above $61K. The bulls have been buying the dips, each time bears threaten to breach the $60,000 psychological price level. On the higher time frame, the bulls are sustaining recent rallies as BTC prices found support above the 21-day SMA.

BTC/USD is now trading in a narrow range between $60,000 and $63,000. On October 25, buyers failed to keep price above the $64,000 high. If they had succeeded, buyers would have breached the $64,000 and $67,000 resistance levels to resume the upside momentum. Today, BTC price has been confined to trade in a narrow range for the past four days. Buyers have retested the $63,000 resistance zone on three occasions but were repelled. At one time, the bears pushed BTC price to $59,800 low but the bulls bought the dips. If the downtrend has been sustained beyond $59,800, the selling pressure would have been accelerated, and Bitcoin will be weakened. BTC/USD could have dropped to $58,000 and then later to $54,300.

Institutional Managers Buy $2b Worth of Bitcoin

In October 2021, intuitional managers bought $2B worth of Bitcoin. This is majorly attributed to the approval of two futures-linked ETFs in the United States. According to CoinShares’ weekly flows report, Crypto investment products saw inflows totaling $288 million for the week ending Oct. 31, with Bitcoin accounting for $269 million. In the United States, institutional demand has picked up amid expectations that the United States Securities and Exchange Commission, or SEC, would approve its first Bitcoin exchange-traded fund. Those expectations came to a realization. In October, Bitcoin funds as a whole generated $2 billion in inflows, bringing the year-to-date total to nearly $6.4 billion.

Meanwhile, BTC/USD is now trading marginally as Bitcoin trades above $61K. The upward move has been restricted below $63,000 high. Buyers are defending the $60,000 psychological price level as bulls continue to buy the dips. In the last few days, the price action has been characterized by small body candlesticks called Doji. These candlesticks indicate indecision between buyers and sellers on the direction of the market. 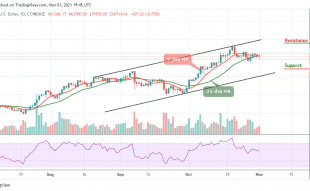