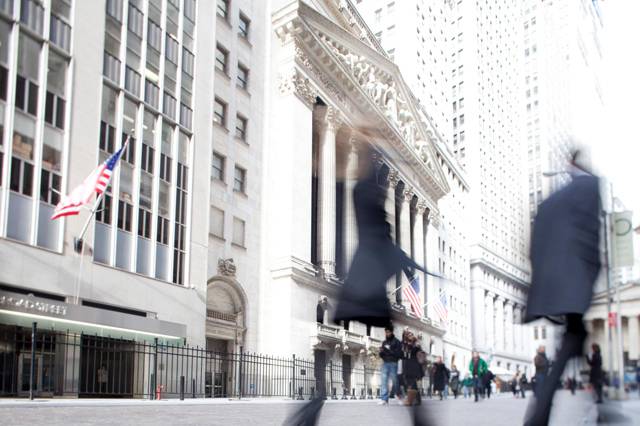 NEW YORK (InsideBitcoins) — As the bitcoin summit hosted by financial information provider Bloomberg continued Monday afternoon, a generally optimistic panel discussed the potential of bitcoin and where it can be taken. That’s when Adam Ludwin, CEO of Chain proclaimed: “Bitcoin could eat everyone’s lunch.”

It was in response to a report issued by Goldman Sachs earlier this year that argued bitcoin wasn’t worth much; its value was derived from the blockchain technology underlying the cryptocurrency. The entire panel vehemently disagreed and said that without one, you wouldn’t have the other.

“Bitcoin would allow Visa to get into the parking meter business because it could accept those much smaller transactions and generate revenue from it.”

Will O’Brien, CEO of BitGo, said, “Bitcoin is a currency and a technology. The blockchain is the strongest super computer in the world. Bitcoin is a good store of value for certain parts of the world.”

“Bitcoin introduces digital scarcity because of the atomic unit (satoshi). Once we figure out security — which Will [O’Brien] is leading with BitGo — and then once we combine digital security with contracts, we now can put that onto a public ledger with complete transparency, zero risk, and an ease of use,” Ludwin added.

The panel was unanimous in arguing that there is quite a bit of utility with bitcoin. And that’s why Ludwin suggested it could eat everyone’s lunch.

“It’s not likely to happen for anyone in the room in their career, but at some point, bitcoin could eat everyone’s lunch.”

Bitcoin could be used, and in fact is already being implemented for, contracts. Rather than being given your Social Security card — which could easily be stolen — that data could be stored on the blockchain, which can’t be cracked. Another option could be the transfer of tickets for concerts. Right now Ticketmaster is the leader in this space but the blockchain could make it easy for the individual venue to manage ticket sales. That could destroy Ticketmaster’s entire business.

Another big part of that lunch is the fact that bitcoin will be the backbone of all finance in the future, according to O’Brien.

There are plenty of incumbents today that are unsure how to deal with bitcoin. O’Brien offered Western Union as a primary case. He argued that the company makes a considerable amount of money transferring money around the world, and it is very profitable. But how does it start to phase over to bitcoin without losing that profit? he asked.

While large companies are trying to figure that out, smaller bitcoin incumbents will rise up and start to eat away at the behemoth’s overall market share.

“Visa is an interesting use case,” O’Brien explained. “Right now, they can’t make money on transactions of less than $0.50. Bitcoin would allow Visa to get into the parking meter business because it could accept those much smaller transactions and generate revenue from it.”