The value of all cryptocurrencies combined has fallen to a level lower than $1 trillion for the first time in less than a day on the cryptocurrency market.

Many currencies have begun to show a negative trend as investors become increasingly concerned that the market may fall to levels similar to those seen in June 2022.

Tamadoge is one of those coins that, in these circumstances that demands your immediate attention for several reasons.

As the play to earn phenomenon Tamadoge continues to gain in popularity over the past several weeks, its presale has already soared beyond the $12 million barrier and is into its final phases.

The war chest of Tamadoge, so called because it finances the future growth of Tamadoge, has been steadily expanding, and it looks that the presale for Tamadoge is getting closer and closer to its conclusion.

Tamadoge Is Your Best Bet in a Bear Market

As the price of cryptocurrencies continues to fall, investors are searching for the best coins in which to invest during the current cryptocurrency winter.

Tamadoge (TAMA), the newest Memecoin on the market, is an excellent option and one of the better alternatives.

The current presale for Tamadoge is experiencing unprecedented levels of interest from customers. Already, more than $12 million has been collected during the Tamadoge presale.

Just a few weeks after it was first made available, the presale is getting very close to being over. Through the Tamadoge website, customers have the opportunity to take part in this presale event.

The quantity of Tamadoge coins is limited to 2 billion, making it one of the characteristics that sets it apart as a Memecoin.

During the presale, all one billion of these tokens will be purchased until there are none left. Since there is such a limited supply, there is a strong possibility that TAMA may see tremendous growth in the future.

In addition to this, Tamadoge pledges to be useful to the community. The goal of Tamadoge is to become one of the most successful play-to-earn games available on the cryptocurrency market.

On the Tamaverse, players have the opportunity to compete in a variety of contests for the chance to win prizes in the form of TAMA tokens.

The cryptocurrency community is really impressed with the comprehensive plan that the Tamadoge team has offered.

As interest in the Memecoin continues to rise, the number of people following Tamadoge on Twitter has now crossed the 55,000 mark.

The war chest for Tamadoge is currently expanding; the more money that the Tamadoge team is able to generate during their presale, the more finances they will have at their behest to invest in the adding more features and also use the funds to develop the project going forward.

In spite of the recent price drops that have been seen in the Bitcoin and Ethereum markets, as well as the subsequent decline that this had meant for the rest of the market more generally, the Tamadoge presale has been performing quite well, and investors have been flocking to the presale on a consistent basis to become a part of the project.

Prices Are Skyrocketing During Presale

The Tamadoge presale is being run in such a way that the price of TAMA will gradually increase over the course of the presale. This will both motivate individuals to make early purchases and provide incentives for those who do so.

Following the conclusion of the presale, fifty percent of all TAMA will have been sold to the community, twenty percent will be utilized to create liquidity, and the remaining thirty percent will be gradually unlocked over the course of ten years in order to facilitate the expansion of the ecosystem.

Tamadoge is currently in the sixth week of the presale, and there are just 30% of the tokens left to purchase.

The Road Ahead For Tamadoge

It is quite evident that they are interested in taking part in the ecosystem over the course of a much extended period of time given the lengthy vesting time for team equity.

Given that the team will be dedicated to the project for the next 10 years, it is essential that they continue to grow and improve on the many elements that are outlined in their roadmap.

The future Tamaverse, which is a Metaverse that has been constructed from the ground up specifically for the Tamadoge community, is one of the most intriguing aspects of the roadmap.

People will be able to undertake a wide variety of activities with their virtual pets, including taking care of them and playing games with them inside of it.

This is in addition to the augmented reality and virtual reality capability that Tamadoge is working on integrating, which will give its customers the ability to artificially superimpose their digital pets on the real environment. 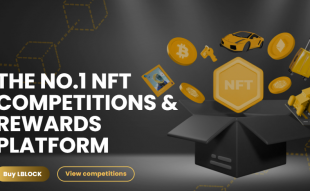 Hands Down, Lucky Block Sweeps the Floor of NFT Competition with Unbeatable Offerings