The global cryptocurrency market has suffered a declining performance in recent hours. The value of Bitcoin has lowered considerably. In contrast, some coins such as Ether (ETH), Binance Coin (BNB), and Holo price have shown a positive trend, keeping the market uncertain. These market changes in terms of performance are indications that uniformity in movement is necessary to help the market escape the current crisis. More consistent gains would go a long way in helping the market recover its value.

Holo crypto recorded massive gains on Wednesday, December 28, rising 14% to a daily close of $0.00163. HOT price has, however, lost most of the ground covered yesterday. It is currently trading at $0.00149, with a 24-hour trading volume of $62.39 million and a live market capitalization of $252.88 million which positions it at #94 on CoinMarketCap.

Is Holo A Worthy Investment

Holo coin (HOT) is an Ethereum-based token working to power Holochain, a peer-to-peer (P2P) network wherein Holochain users can store data and apps across the network. It is a decentralized chain where users are allowed to store data on a communal network as opposed to cloud software.

The agent-oriented model employed by the Holochain network is centered on network agents, and users can earn HOT tokens just by using their computing power to store on the network. According to its “green paper,” Holo is tailored to serve as a link between Holochain, which represents the world of crypto technology, and everyday users.

The Holon project has noted several innovations in its green paper, which are expected to “enable a large shift in the landscape of crypto applications and currencies,” including the ability to host P2P apps on the internet for mainstream users.

For governance, the Holochain network employs a distributed hash table (DHT), which shares records of actions while preventing data or app tampering by any third party. DHT also eliminates the need for a proof of work (PoW) or proof of stake (PoS) verification method. Instead, other users on the network support verification.

The network also depends on multiple hosts that provide storage and processing power for DApps built using Holochain. In this regard, either the hosts may install software on their computer that runs in the background while allocating extra processing power to Holochain-based Dapps automatically, or they operate a dedicated machine such as a HoloPort. In exchange, hosts are paid in HoloFuel, a token specifically designed for micro-transactions. The design of HoloFuel is expected to allow the Holo network to process billions of simultaneous transactions.

At the back of the Holochain network is a team of experienced developers, under the leadership of former intelligence employees and artificial intelligence experts. Together and leveraging the wisdom of their individual and combined knowledge and expertise, the team is committed to expanding Holochain, which would allow for the decentralization of existing apps such as Uber and Airbnb in the taxi and hotel industries, respectively.

Holochain has uniquely positioned itself to decentralize most aspects of technology, potentially competing with giant firms such as Facebook (NASDAQ: FB) and DoorDash (NYSE: DASH). Noteworthy, however, these firms are yet to launch most of this technology, which means the idea of eventual competition remains rather speculative.

Nevertheless, once the technology is introduced and displays positive results, the impact Holochain can have and the prospective HOT price associated with the release may be colossal.

Will Holo Price Break Out Of The Bearish Triangle?

Holo price has been consolidating since December 17 with bulls and bears battling for control of the market. The support at $0.00142 has remained critical since November, keeping the HOT price from recording further losses.

Based on the four-hour chart below, the price action has formed a bearish triangle chart pattern projecting a 35.36% drop to $0.00091. The chart pattern results from the HOT price recording lower highs that have continuously led to the formation of a descending trendline that has been suppressing the price since early November.

HOT price indicates a bullish potential, but the chart pattern threatens this possibility.  Currently, Holo price at $0.00149 relies on the support offered by the 50-day SMA to fight the resistance barrier due to the upper trendline of the prevailing chart pattern.

If the bulls manage to break off this hurdle, then they would also have to crack past the next resistance offered by the 100-day SMA at $0.0015 and the 200-day SMA at $0.00159. Should this happen, it would trigger massive buy orders that are likely to push the HOT price to the $0.00173 swing high, and in highly bullish cases, climb higher to the local high of $0.0018.

Supporting this bullish thesis is the relative strength index (RSI) which was tipping upwards to indicate that more buyers are entering the HOT market. At the same time, the moving average convergence divergence (MACD) indicator was moving upwards and is approaching the neutral line, suggesting that the price action favored the upside. Moreover, this trend-following indicator has just sent a call to buy HOT in the same timeline. This happened earlier on Thursday when the MACD line (blue) crossed above the signal line (orange) signaling the increasing demand for the Holo token.

However, if the bearish triangle chart pattern holds and bulls are unable to increase their market grip, bears may take over, first losing the 50-day SMA support before retesting the next formidable support at $0.00142. Breaching this support would signal a confirmation of the bearish technical formation setting the Holo price on a downward spiral toward $0.0009, which would signify a 38.33% decline from the current price.

Promising Projects You Should Definitely Consider in 2023: FGHT, D2T

FightOut is a trending new crypto project that has attracted a colossal community of followers on Twitter and Telegram barely three months after going live. The fast-growing interest in the project amid the bear market sentiments is impressive.

At the core of the project, FightOut is a fitness application founded upon the much-hyped move-to-earn (M2E) concept. The goal of the FightOut project is to bring more ease and efficiency to fitness by leveraging the latest technologies, including blockchain. ‘Level up your health, earn rewards, and compete in the metaverse,’ greets the website.

Did you know? @FightOut_ will open the world's first major Web3 integrated gyms! 👀

With such stunning attention from the crypto ecosystem, FightOut’s native token FGHT has so far raised upwards of $2.44 million. Early movers will not only get a chance to make gains from price appreciation but will also gain the ability to earn a nearly 50% bonus.

Dash 2 Trade is also another popular cryptocurrency of 2022 expected to explode in 2023. It has been lauded and hailed by crypto communities across social media platforms, calling it the next big utility token.

The project’s native token D2T is in the last phase of its presale at the time of writing and has already raised close to $11.31M in a few weeks. The first CEX listing of D2T is slated for Wednesday 11th Jan 2023, which is predicted to take the token 10X-20X up from its presale price. 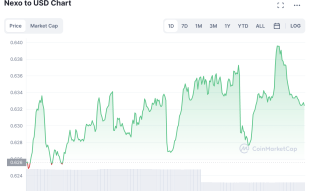 NEXO Price Prediction – Where Will NEXO Go in 2023

Join Our Telegram channel to stay up to date on breaking news coverage Nexo ...