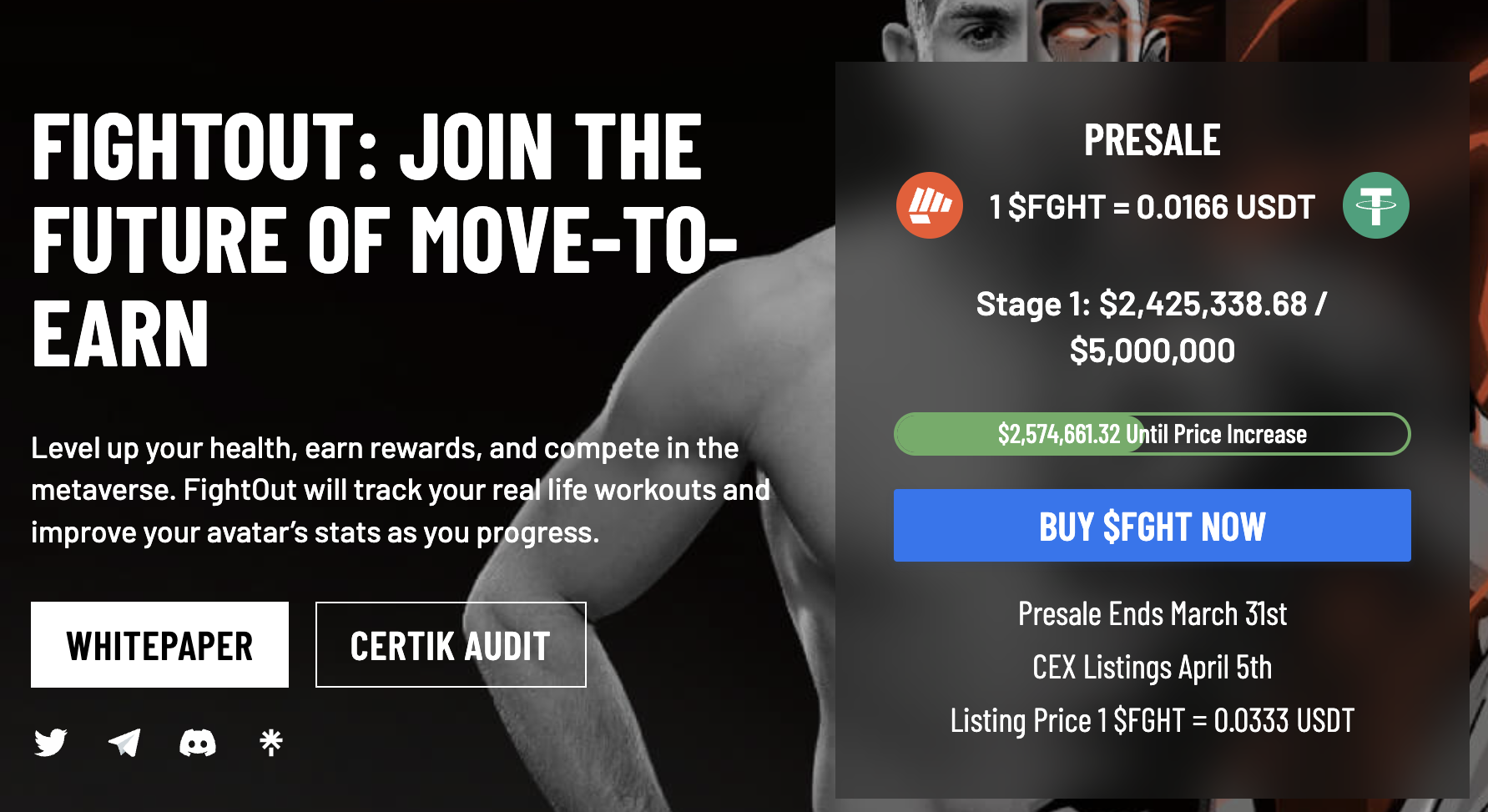 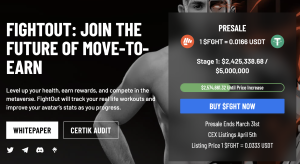 The web 3 space is flooded with innovative projects that can’t go past having a great idea. Fitness is one of those ideas. Cryptocurrencies like Stepn and FitFi have tried hard to gain attention from the masses, but so far, they haven’t made a dent. That is why when a project comes along that takes a holistic approach to fitness, makes it inclusive for everyone, and is being backed by MMA fighters – we must listen.

FightOut is a web 3 fitness project that recently opened its presale to the masses – raising more than $2.5 million in less than a month. With its unique approach to motivating people to chase fitness goals and make money from them, FightOut is here to shake things up.

One of the things that we must admit is that regarding fitness, most Web 3 applications have failed to amass the following they deserve. Their ideas were great. Stepn, for instance, is a unique project that paid people to move. And it has restrictions in place that stop players from tricking the ecosystem. However, two roadblocks stopped it from gaining traction.

We were talking about back when the concept of MoveFi was still new, and many developers thought that the ecosystem itself was a revenue-generating machine. It is a wrong idea because the adoption rate was slow, and the lack of real-world utilities stopped these projects from growing.

Also, while the developers took measures so that no one could finesse the system – like using the app while riding a bike and getting the miles on – many found a way by buying multiple sneakers and wearing multiple devices while running. The runners profited from each of them, and soon the supply of the tokens became so high that the value dropped drastically.

The token’s value is facing a steep decline and is trading closer to its launch-day price.

While this asset’s abysmal performance was expected, it did show multiple underlying issues of the currently traded fitness cryptos that we must consider.

Here are the Underlying Issues with Traditional Web 3 Fitness Apps

FightOut is setting out to solve these issues – and that’s why it is getting the attention it deserves,

How is FightOut Solving the Biggest Issues of the Web 3 Fitness Space?

Web 3 gives users the ability to get access to unparalleled processing power, and FightOut aims to exploit all of it.

Backed by professional mixed martial artists, FightOut offers multiple fitness training modules that users can customize based on their fitness goals. Are you looking to get better at endurance? You can check out FightOut. Is hitting a new PR at the gym your goal? FightOut is here. Do you want your punches to have more power? FightOut has a training module for you as well.

Everything from Brazilian jiu-jitsu to CrossFit to weight training to even Yoga is available on FightOut. And if you are willing to grind and sweat, this platform can reward you in more ways than one.

An NFT Avatar that you get automatically upon creating an account

You don’t need an NFT to get into FightOut, but you get an NFT when you join FightOut. That is the idea that this project picks. When you create an account on this platform, you get an NFT – an Avatar you can customize free of cost. The only caveat is that you can’t sell this NFT on the market. But you do not need to.

As you complete fitness challenges, you earn $FGHT tokens, the native cryptocurrency of the FightOut ecosystem. To make this token sustainable, developers have created another partner in-app currency, REPS. REPS is an off-chain currency you can use to buy NFTs from the FightOut marketplace. It is also the currency you exchange to get into FightOut gyms – the first of which will open in Q1 of next year, according to the roadmap.

There are many more utilities of REPS and $FGHT tokens that you can read about in our FightOut price prediction. The basic idea is that the demand for REPS will drive the demand for FGHT tokens. That creates a balance between the two assets that are then used to maintain the economy of this ecosystem.

You can earn interest on crypto by staking it on the pools or through the cryptocurrency exchanges, but that only gives a financial value to the cryptocurrency. But a token is a lot more than that, and FightOut has realized that and introduced a Stake-to-Earn model.

In addition to the standard APYs, FGHT staking will allow you to get gym memberships, health center members, 1-on-1 training, and other utilities. Therefore, you will get more utility from staking your tokens.

And the fact that staking limits the tokens in circulation is another positive since it will maintain the token’s scarcity.

FightOut Raises More Than $2.5 Million in The First Round – Presale End Date is Set

Due to the factors mentioned in the last section, FightOut has gotten much attention from the crypto crowd. This token has so far raised upwards of $2.5 million. Early movers won’t only get a chance to make gains from price appreciation but will also gain the ability to earn a nearly 50% bonus. 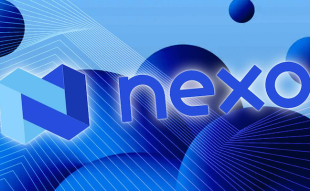