The Shiba Inu token (SHIB), which was going through a downward trend amid a general decline in cryptocurrency values, is attempting to restore its momentum. Shiba Inu is apparently attempting to transform its identity so that it isn’t just perceived as a mere meme coin.

This meme coin has lately seen significant pump, gaining more than 30% on August 15. The increase is linked to both the hype regarding the release of the Shiba Inu-themed video game Shiba Eternity and the latest increase in the price of Ethereum, the blockchain that supports Shiba Inu.

On Monday morning of this week, the SHIB token reached a high of $0.00001774 and caught the attention of the market. The token registered a growth of more than 34% in its price that day. As soon as this news broke, the cryptocurrency became the most popular digital asset on the cryptocurrency news aggregator Coinmarketcap.com.

At one point, Shiba Inu’s increasing price trend allowed it to pass Avalanche and move up to the 12th-most valuable cryptocurrency in the market with a $9 billion market value.

Reasons Behind the Increase in Shiba Inu Price

While it is difficult to pinpoint the precise cause of Shiba Inu’s (SHIB) recent price increase, a number of favourable events over the previous few weeks may have driven the crypto’s upward price trend.

Perhaps, the additional utility that the project offers above Dogecoin is one of the factors the SHIB network has been able to expand so successfully. In an attempt to increase the utility or functionality of this meme coin, the Shiba Inu ecosystem has recently introduced a decentralized exchange (DEX) and a non-fungible token incubator.

Also, to reduce the network’s reliance on the Ethereum platform, developers are adding the final touches to a layer-2 solution. As per the developer group Unification foundation, this layer-2 blockchain, Shibarium, would get introduced in the market by the third quarter of this year.

Further, SHIB and Binance teamed up two weeks back to allow payment for SHIB’s token on the Binance card. As a result, SHIB is now available for payments in a few European nations, with the option to receive 8% BNB cash back without any foreign exchange or other fees.

SHIB made the announcement two weeks earlier that it would be releasing a new game called “Shiba Eternity.” This game was created by Playside Studios, an Australian game studio, and will be accessible on both ios and Android platforms.

It is also speculated that the tweet by a US Senate Candidate has brought a lot of attention to the SHIB token. Shannon Bray, North Carolina Senate 2022 candidate, mentioned in a tweet, “Do you think $shib will break the 0.00001770 this evening? I do, and I think the overseas market is going to run with it. This tweet will either age well in 24 hours or flop, but my money is on the #shibarmy. Oh, and the volume is going to push this up tonight!”

In addition, he retweeted about St. Vincent and Grenadines-based cryptocurrency trading platform BlueBit.io, which listed Shiba Inu and made a visual clip on SHIB’s highlights. Considering the variety of these announcements and events, it can be said that all these things played a crucial role in pumping the price of Shiba Inu this month.

Shiba Inu vs. Tamadoge: Which Coin Offers You A Better Investment?

Tamadoge is the best choice if you’re seeking to invest in a play-to-earn cryptocurrency game that might offer attractive returns. It has recently concluded its beta sale within a few days, during which a significant amount of $5.6 million was raised. The presale for Tamadoge will be finished over the coming weeks. The presale’s hard-capped overall raise of $10 million will give the project enough room to complete the remaining tasks on the blueprint.

For all meme coins available in the industry, the lack of utility has been a problem. Tokens that wish to remain viable in the future are now collaborating with companies to expand their functionality and improve their token’s value. On the contrary, all activities within the Tamaverse would require TAMA tokens. To purchase Tamadoge pets from the Tama shop and for all other activities, users require TAMA tokens.

TAMA employs the deflationary strategy, in contrast to several other coins that raise their supply to keep up with demand. Shiba Inu, for instance, has a total of 1 quadrillion coins, indicating that there is more supply than demand. TAMA, on the contrary, now has 2 billion tokens overall and won’t be producing any more. In reality, Tamadoge aims to make sure that there is constantly more demand than there is supply so that the price will rise.

Up to 2030, the metaverse market is anticipated to expand gradually. It makes more sense to invest in tokens like Tamadoge that take advantage of this market as this market might grow to be worth $1,600 billion by the end of the decade. 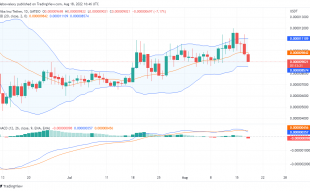 Kiba Trends Downwards, but Tamadoge Is Set for Success

Join Our Telegram channel to stay up to date on breaking news coverage Kiba ...