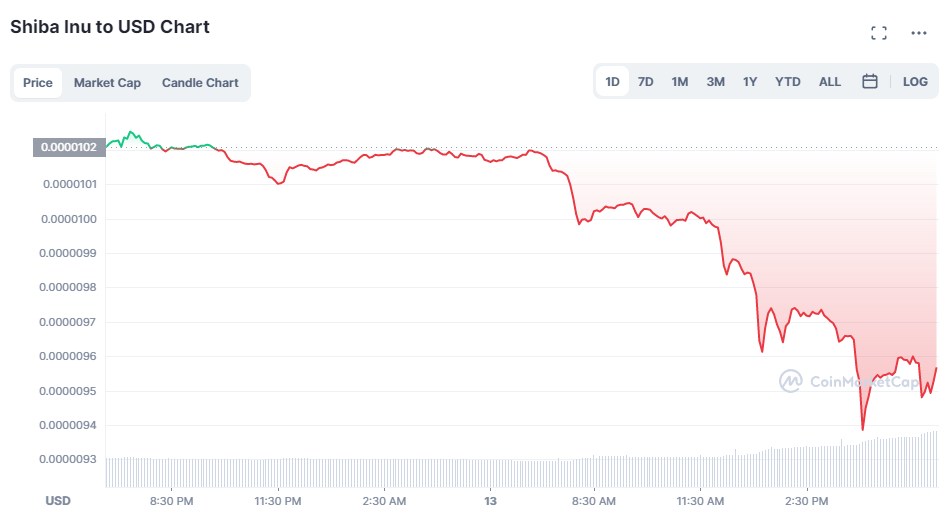 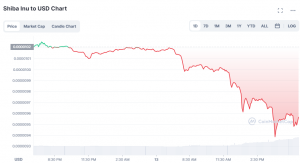 Investors are curious whether Shiba Inu cryptocurrency can reach $1 in 2022 after rising by 1000% in the last months of 2021. While it seems far-fetched, we’re talking about crypto, so everything is conceivable.

Nobody knows when the Shiba Inu coin will be worth a dollar. However, since its inception, this cryptocurrency has increased by 1,294,881.3%. In 2020, a $100 investment in Shiba Inu (SHIB) would be worth millions a year later. If Shiba Inu can replicate this feat in 2022, its stock price may reach $1 by year’s end.

If we are more cautious about SHIB’s pricing, we could wait until 2030 before seeing it trading at $1. In this scenario, it is assumed that SHIB will continue to rise by a factor of a thousand or more during each bull market. So now’s go into the nitty-gritty of making SHIB a $1 stock by 2030.

Because the pair has now fallen through the ascending trendline that had been providing support at $0.0000106, the Shiba Inu price forecast remains bearish. Now that Shiba Inu has found support at the triple bottom level of $0.00001001, the price should continue to rise.

Data from the Indian market suggests buyers above Bitcoin and Ethereum preferred Shiba Inu. This is because SHIB has a reasonably large volume despite the country’s stringent tax structure.

Shiba Inu cryptocurrency has reached many important milestones recently, including widespread adoption. SHIB is one of the six new cryptocurrencies that BitMEX said would begin trading on October 10.

The SHIB Token Surpasses All Others on Indian Crypto Exchanges

Indian investors seem to be putting their money into the Shiba Inu token (SHIB), a popular meme token, rather than the more traditional cryptocurrencies Bitcoin and Ethereum. As a result, WazirX, Zebpay, and CoinDCX, the three largest cryptocurrency exchanges in India, now list it as their most liquid coin.

Nomics claims that 9 per cent of all cryptocurrency transactions in the nation include the SHIB coin. Since the beginning of the year, Zebpay has processed nearly $120 million in SHIB trades, prompting the exchange to consider leaving India owing to the country’s stringent tax obligations.

According to the exchange’s data, almost 10% of all transactions on WazirX use the meme token. The amount of money exchanged over the previous ten months exceeds $970 million. SHIB accounts for more than five per cent of the volume traded on India’s second main exchange, CoinDCX.

Is the Shiba Inu Going to Be Worth More Than Bitcoin?

The current market cap of CoinMarketCap is $5.5 billion, putting it at position #15. There are 549 trillion SHIB in circulation. Bitcoin has not changed from $366.3 billion. Therefore, the popularity of Shiba Inus is not expected to skyrocket.

Shiba Inu shattered the uptrend that kept the currency stable at $0.0000107. Currently, immediate support is being extended by a triple bottom pattern at the $0.00000992 level.

Possibility of Revision in 2023

In 2023, Shiba Inu might be a major cryptocurrency. However, remember that Shib’s price correlates highly to the overall crypto market’s success. Therefore, if Bitcoin’s growth slows in 2023, Shib may either see a reversal or make small gains relative to its prior years’ performance.

This presumption is well-grounded in past events. The Bitcoin market often stagnates for a year before halving. Long-term investors should buy, while those sitting on large gains from previous rallies should sell. Although the next Bitcoin halving isn’t until 2024, the market may be trading sideways in 2023 due to bull weariness after the rally that began in 2020.

Potential investors may stock up on SHIB before the next Bitcoin halves in 2024. Shiba (SHIB) might easily surge to above $0.01 in 2024 if the effect of the last halving is any indication.

This is because its underlying conditions will be much stronger than when it was initially pumped in 2020.

Firstly, by 2024, Shiba Inu will have gained much more mainstream recognition. Therefore, many individuals may acquire SHIB after the BTC halving of 2024 with the hope of becoming billionaires due to the cryptocurrency’s potential. Because of this fear of missing out, the price may increase by several thousand per cent in one year.

There’s also the issue of token distribution. Shiba Inu had many tokens, to begin with—one quadrillion, to be exact. However, more than half of that supply is now unavailable for use. This is because roughly half of all Shiba Inu was burned by Vitalik Buterin, contributing to the coin’s deflationary character. The more people who utilise Shiba Inu, the lower the supply becomes. A substantially less quantity will be available by 2024 because of its rapid uptake. It’s possible that by 2024, SHIB’s price may increase to $0.01.

Due to the long-lasting consequences of Bitcoin halving, SHIB may continue its upward momentum to 2025. 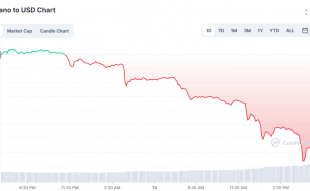 Foresight into the Future of Cardano’s Value: How Low Can ADA Go?