Homenewsripple cto lashes out at vitalik buterin over xrp remarks

Ripple’s CTO, David Schwartz, and the co-founder of Ethereum, Vitalik Buterin, have engaged in a twitter spat over the status of XRP. Schwartz said that Ripple had been unfairly treated by the US Securities and Exchange Commission (SEC). On the other hand, Buterin has accused Ripple of making false claims of Ethereum being “China-controlled.”

Ripple CTO and Vitalik Buterin engage in a Twitter spat

The latest conflict between the two executives was ignited by a discussion regarding Canada’s new crypto regulatory framework. Two Ontario-based exchanges, Newton and Bitbuy have imposed a 30,000 CAD limit on crypto purchases except for Bitcoin, Ether, Litecoin, and Bitcoin Cash.

Amid this discussion, Buterin praised the Ethereum community for opposing regulatory regimes that placed Ether ahead of other cryptocurrencies. The founder of Bankless.eth responded, saying that he would have remained silent if the Ontario exchanges had solely restricted XRP.

Buterin responded to the remarks by saying that XRP had lost its right to protection after they attempted to throw Ethereum “under the bus s China-controlled.” Buterin slammed Ripple for claiming Bitcoin and Ether were controlled by China.

Buterin later said that Ripple, currently facing a lawsuit with the SEC, had dropped to “new levels of strangeness.” The response by Buterin has attracted a lot of attention from the crypto community, including Ripple’s CTO.

The Ripple CTO stood by the company’s claims on Bitcoin and Ether being securities. He also compared the miners from the two networks as shareholders. Schwartz said miners in PoW systems were like stockholders in a publicly-listed company. He later asked Buterin whether the market or regulatory agencies should conclude the discussions.

The SEC has been facing a contentious issue of differentiating between securities and tokens in the crypto asset market. The SEC sued XRP in December 2022 for selling unregistered securities. The ongoing case is expected to provide a regulatory breakthrough for the growing crypto industry.

The SEC claims that XRP conducted an illegal securities sale in the lawsuit by offering XRP. The case has been dragging on for more than one and a half years later, and there is no clear indication of what the verdict might be. Ripple has seen some small victories, while the SEC has been criticized for lack of regulatory clarity. Ripple had previously vowed to move its operations from the US if it lost the case. 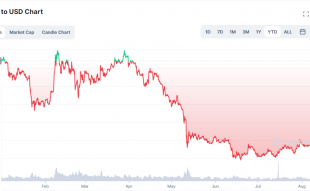