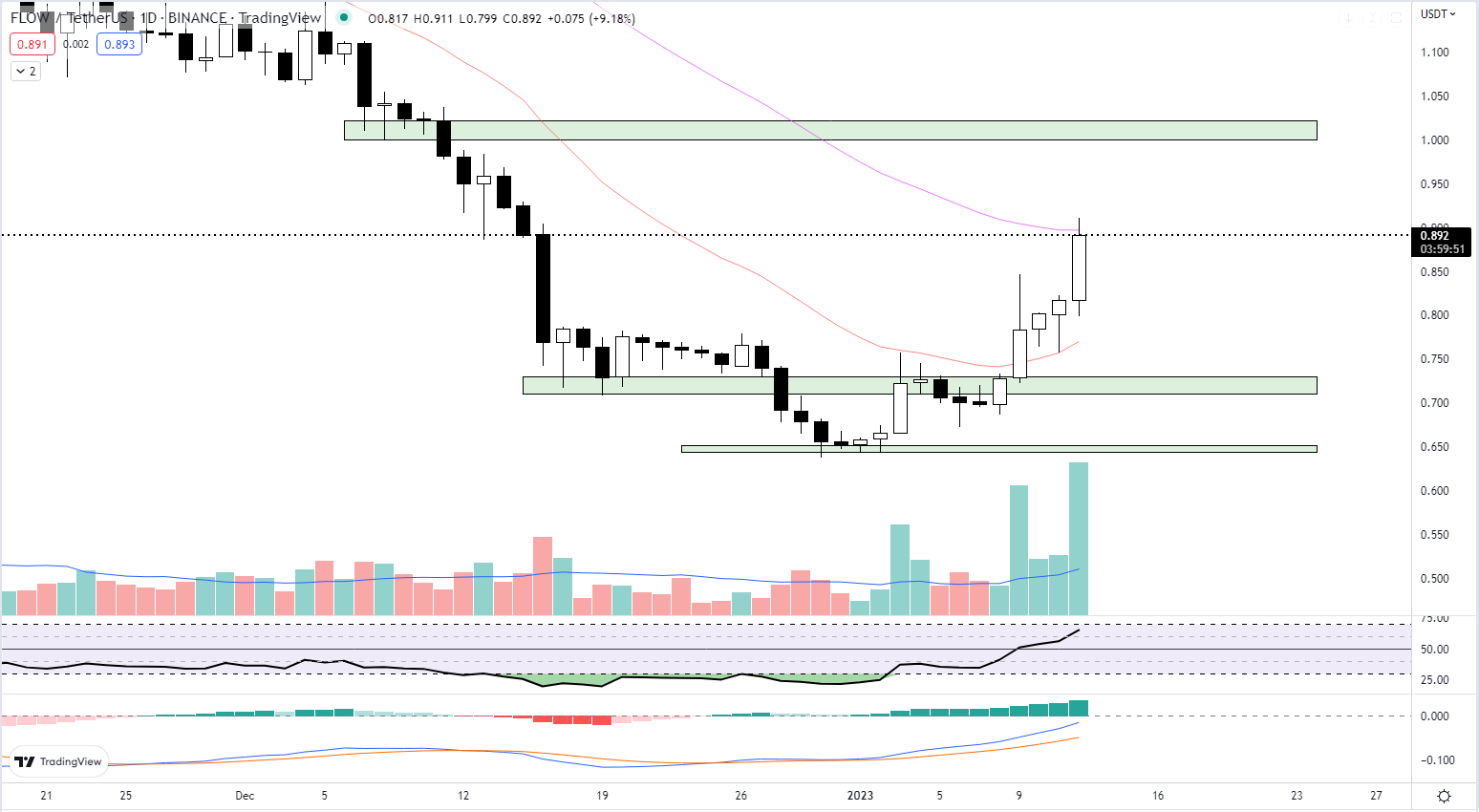 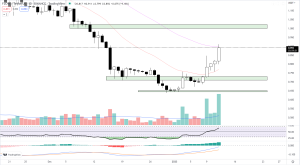 Flow’s price has increased 16.92% in the last four days, with an additional 9.18% gain today–while technicals suggest that the altcoin might see further gains over the coming days.

We're excited to announce we've partnered with @cryptoslamio, one of the best NFT data aggregators in this space 🔥

This will lead to enhanced onboarding and support for @hellodapper collections as well as other projects building #onFlow, plus future collaborations 🙌 pic.twitter.com/hXoCZtYggG

The surge in Flow’s price is likely partly due to the partnership between Flow and Crypto Slam, a multi-chain NFT data aggregator. This partnership will provide Flow-based applications with assistance for customer support and onboarding, as well as open up possibilities for further collaborations. The recent update to Flow’s consensus algorithm has also made the blockchain more resilient and reliable, which will help to bolster the altcoin’s usability and eco-friendliness.

Will Flow see further gains or is momentum stalling?

The MACD line is currently at -0.016, the signal line stands at -0.050, and the histogram shows a 0.033 reading; all of which demonstrate that we have remained in an advantageous bullish position since crossing back on December 25, with a steady increase between the MACD and Signal lines as supported by the histogram.

At $0.892, Flow is trading near its immediate support range of $0.709 to $0.730, with the possibility of reaching a psychological resistance of $1. Its Relative Strength Index (RSI) is at 63.74, indicating that the altcoin could be on the brink of a further rally.

Ultimately, Flow’s recent strides and collaborations spell an optimistic future for the altcoin; so investors should be sure to closely monitor its development along with the cryptocurrency market in the weeks ahead. As always, if you take a position set tight stop losses and don’t forget to take profits.

Alternative Cryptocurrencies to Invest In

As we progress further into 2023 and anticipate a possible market recovery, investors are encouraged to diversify their portfolios. While Flow may be one of the more widely recognized altcoins, other coins with solid backing such as MMEMAG, FGHT, and CCHG could provide greater potential for growth.

Meta Masters Guild (MMG) is a soon-to-be launched Web3 gaming guild, which will connect gamers to a community-oriented decentralized game ecosystem. Players will be rewarded with MEMAG cryptocurrency for their achievements and participating in exciting contests while maintaining full control over any assets acquired during gameplay.

The MMG platform is being created to reward players for both their time and money, ensuring they are fairly compensated for contributing to game economies.

The MMG ecosystem uses a single currency, the Meta Masters Token ($MEMAG), and in-game rewards called “Gems” can be converted to MEMAG tokens. This allows players to either cash out or reinvest in the ecosystem in various ways, incentivizing them to invest both their time and money. The company is committed to creating a fair and transparent ecosystem, where players truly own and control their in-game assets, which are verifiable and tradable on the Ethereum blockchain.

MMG prioritizes fun gameplay and sustainability, and aims to create a sense of ownership and community among players. The company is looking to address the major issues in the gaming industry, such as predatory practices, by creating a fair and transparent ecosystem and giving players input into games and control of game economies. The open in-game economy allows players to trade all their in-game items and currency to one another as they please.

The first game on the platform will be Meta Kart Racers, a Multiplayer Online Racing Arena (MORA) type of game, with more games and indie developers joining the ecosystem as it expands.

The $MEMAG token for the project is currently in its presale.

Fight Out (FGHT) Set to Pack a Punch

In 2023, Fight Out will empower health and fitness devotees with its innovative move-to-earn (M2E) app and gym network. With the brand’s modern technology, users can receive rewards for their workouts while teaming up in competitions against fellow members to accumulate REPS tokens.

With the tokens you earn, you can receive discounts on Fight Out’s membership packages, subscriptions and merchandise—from apparel to dietary supplements and training equipment. And with the app and gym locations creating a supportive community around your fitness journey, there will be plenty of ways for members to cheer each other on as they work towards fitness goals together.

Fight Out will add an interesting twist to fitness with its one-of-a-kind NFT avatar that keeps track of users’ physical accomplishments and upgrades as they progress in their fitness journey. Tangible rewards combined with the motivation from other people in the community will create a powerful atmosphere to push individuals towards becoming their healthiest selves.

Stay one step ahead and join the presale now! 🔥

Be a part of the future of fitness and take your journey to the next level!

Fight Out’s first physical gym location is set to open in the fourth quarter of 2023, featuring state-of-the-art equipment and services, including studios for rent, health bars, and co-working areas. The gym will also utilize advanced Web3-connected technology, such as “mirrors” that display users’ digital fitness profiles and sensors that track progress, all while offering insights and earning rewards. The company is also developing an ambassador program that will feature top boxers and athletes who will hold masterclasses and other exclusive events.

Fight Out has announced the opening of its first physical gym for Q4 2023, bringing a synthesis of fitness and technology to a new type of Web3 connected high tech environment. With top-of-the-line equipment and services like studios for rent, health bars, as well as co-working areas; state-of-the art Web3 connected “mirrors” that display your digital profiles, and sensors tracking progress; combined with exclusive events from renowned boxers and athletes through an ambassador program–Fight Out will undoubtedly be at the forefront of the next generation fitness services.

It’s evident that Fight Out has a massive potential within the rapidly developing fitness and health industry. Thanks to its inventive app, tech attributes and endorsements from renowned athletes, it has quickly won over investors. The demand for Fight Out token is soaring since launch with close to $2.9 million raised in just a matter of weeks. During the presale you can grab up to 50% bonus on investments above $50K.

C+Charge is going to change for the better the way electric vehicle (EV) owners charge and pay for their vehicles. Through its groundbreaking blockchain-based platform, C+Charge will make it easier than ever before to find charging networks and complete transactions without any hassle. Plus, users can earn carbon credits while they utilize the service.

As the number of electric vehicles continues to multiply, so do their associated charging fees. In several cities, electricity costs can be prohibitively high for EV owners–but C+Charge is looking to help with this by showing users the best rates for chargers and providing information about their current status.

By tackling existing issues such as limited access to carbon credits, no incentives for EV drivers, the absence of a unified payment solution and real-time data, non-transparent pricing, plus shortages in charging solutions–C+Charge could help EVs become more popular.

In the UK, it costs around £35 per charge at public charging stations💸

It might vary due to the location, tariff, and so on📉

✅With C+Charge, drivers can receive most precise costs before the charges

Now is a good time to jump at this opportunity, as Investors can purchase C+Charge tokens during the presale stage for a discounted rate of $0.013 USDT per token. The price will subsequently rise over three more stages until reaching its highest price of $0.02350 by the end of the presale.

Trent is an experienced content strategist, editor, writer and project manager, currently interested in Web3 and blockchain. Based in Canada, Trent has worked as a senior content marketer for Leads Panda as well as a freelance SEO consultant.

View all posts by Trent Rhode 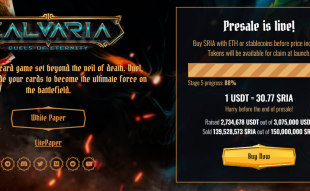 Calvaria Presale Is Closing Soon – 90% Sold Out – Don’t Miss Out!