Cryptocurrencies have been looked at critically by several major financial institutions for a long time. While there have been some changes in the perception of these digital assets lately, they are yet to gain the trust of the critics. However, the various issues that arose due to the current bear market only fueled these organizations to scrutinise cryptocurrencies more.

Despite all this, the industry has managed to survive and even build a huge community that now comprises major banks and related organizations. Throughout the crypto winter, this community has helped every other compromised party in the space to sustain their business through several kinds of aid.

One case that has been troubling a huge chunk of the crypto-investing citizenry over the last 2 years is Ripple vs The SEC. The parent company of XRP, a popular cryptocurrency, has been fighting to win against the government organization against fraud and money laundering claims.

However, both parties have now planned to end the ever-lasting series of events and get a summary judgement from the court based on existing evidence.

The SEC, a government body set up to protect investors, sued the blockchain company Ripple back in 2020, along with the CEOs. The SEC claimed that Ripple has allegedly raised over $1.3 billion by selling XRP (the cryptocurrency token) in unregistered securities transactions.

This claim was challenged by the company, which stated that the XRP token wasn’t in fact, security at all. They mentioned that the sale or trading of XRP did not match the requirements of the Howey Test, which was a Supreme Court case that pave the way for determining whether an asset is a security or not.

This case has historically sparked several debates around the nature of cryptocurrencies and what asset class they can be categorized as, which makes a regulatory framework the need of the hour. A former SEC employee Bill Hinman had spoken in 2018 about why currencies like Bitcoin and Ethereum couldn’t be dubbed securities. Ripple also countered this, which furthered the controversy since they demanded XRP to be looked at in the same light.

Since then, there have been several discoveries from both parties with attempts to prove the legitimacy of their claims. This had put XRP holders in a state of worry, as they were unsure how the proceeding would affect their investments.

A Motion For Summary Judgement

On September 17th, both parties filed separate summary judgement requests, urging for a quicker verdict. The requests were filed in the United States District Court for the Southern District of New York, followed by much excitement from the XRP community.

District Judge Analisa Torres, has agreed to the requests, with a joint schedule presented by SEC and Ripple. In short, the plaintiff and defendant have urged the court to make a final decision since the documents submitted and filed over the 2-year period should be enough to rule in one party’s favour. This final decision is expected to be expedited as SEC and Ripple filed the summary judgement requests on mutual grounds.

What’s Next for XRP?

Despite the case, XRP managed to fair well during the 2021 bull run. However, its growth to an extent was stunted by the continuous popularization of the case. But the final verdict being expedited may come as a relief to the investors since Ripple seems to have an upper hand in the decision which is yet to be announced.

The XRP token achieved its all-time high of around $3.3 way back in 2018 and has since corrected massively. While the bull run last year did help the token to reach the $1 level again, it was cancelled by the cryptocurrency market crash.

Since the dates for final judgement from the court may be soon, the XRP token has been seeing decent momentum, where the token has managed to spike in price. It is currently trading at around $0.4, up more than 10% from its price range of $0.33 a few days ago. 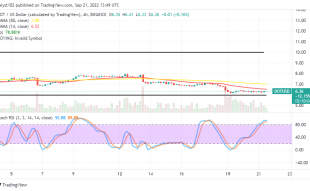