Homenewsbone shibaswap price rises 37 over the weekend where next bone

Shiba Inu (SHIB) has stood out among the most popular crypto launched following the Dogecoin (DOGE) price rally in 2021. What started as just another play on the dog-themed meme coin has now developed as a community-driven project with a notably developing ecosystem.

The bone ShibaSwap (BONE) token is one among many projects developed by the team and launched as they debuted the ShibaSwap decentralized exchange (DEX), Shiboshi NFTs, and the scheduled Shibarium layer-2 blockchain.

In August 2022, the BONE price recorded a successful price streak after a myriad of exchanges listed the Shiba Inu governance token. However, Bone ShibaSwap has since experienced a price correction, an action that, to some extent, hinges on the recent crypto crash due to the FTX collapse.

Bone ShibaSwap Price Drivers And Its Place In the Shiba Ecosystem

ShibaSwap decentralized exchange (DEX), the handiwork of Shiba Inu developers, was launched in July 2021 as a platform where the ShibArmy (users) can trade their SHIB tokens in exchange for other crypto forms. ShibaSwap was designed as a fork from the SushiSwap and ShibaSwap, which run on the Ethereum (ETH) blockchain, with its tokens being ERC-20 standard.

As the governance token for ShibaSwap, BONE allows users to vote on proposals for the project’s future development. Among the privileges within their voting mandate include which pairs will be added to ShibaSwap through the Doggy decentralized autonomous organization (DAO). Notably, the amount of influence one has on the outcome is directly proportional to the number of BONE tokens held.

Based on CoinMarketCap data, out of a total supply of 229.9 million, only up to 156 million BONE tokens are in circulation. With a maximum supply of 250 million tokens, Bone ShibaSwap tokens are minted to be paid to liquidity providers for exchange pairs on ShibaSwap.

The 250 million tokens were intended to fit between the massive 500 trillion supply of SHIB tokens and the much smaller supply of Doge killer, LEASH tokens, which was launched as a rebase token and is similar to an algorithmic stablecoin. An algorithmic token uses a computer program to increase or decrease supply automatically as a means to keep its price pegged to another asset. LEASH tokens have already been “unleashed” and are thereby not pegged to Dogecoin anymore.

“While the staked tokens receive a fixed percentage of BONE, the SSLP pools are distributed as BPB (BONE per block) based on the allocation points to each individual pool.”

ShibaSwap documentation has also revealed that “Our platform also allows the ShibArmy to access upcoming NFTs and additional tools, such as portfolio trackers, to make navigating the crypto world simple and intuitive.”

As Bone ShibaSwap is a DEX running on the Shiba Inu network, news and updates on the ecosystem’s official website are bound to affect its price. The recent rally is connected to Shiba Inu unveiling a surprise it has been teasing, involving the release of a major Shibarium update and its Beta details.

After several teases, Shiba Inu developers have finally revealed the surprise behind the strange hints dropped in recent days and offered details on the Shibarium beta test. A Sunday tweet read:

🦮 A special https://t.co/pl0HAXgkAE countdown has begun. Please allow DNS to propagate correctly, in case the website is loading blank for some users, try reloading again in a few minutes.

One of the Shiba Inu developers – @ShibaTrophias, noted that the website upgrade is only the “first step” towards launching the much-anticipated Shibarium Beta launch. He also shared the above Tweet saying:

“The countdown to the website’s official launch is now available on shibatoken.com, but the developer advised, “the entire website will not launch all at once.”

The disclosure is trustable given that @ShibaTrophias is the same user who provided details on the timeline of upcoming Shiba Inu initiatives. The user has been dropping mysterious tweets over the past few days, sparking speculation among the Shiba Inu community.

First thing is to update our main website. It was much needed and this is our first step as we march towards Shibarium's Beta launch.

The entire website will not launch all at once. Phased rollouts will happen and we'll try to make it as smooth as possible.

However, once all these theories ended, it happened that the website would launch prior to the community accessing the beta version of the upcoming layer-2 solution.

In a series of Tweets on Sunday, a social media influencer, who is also a former member of the Shiba Inu Growth Breed with Twitter handle @LucieShib, shared thoughts on what the team was planning. Lucie confirmed that Shiba Inu was updating its website.

Most likely, the move will entail the deployment of the “Basic wiki structure,” followed by the “Woof paper,” which may serve as the roadmap, and the “Shibarium documentation,” to serve as the community’s guide to the layer-2 solution, based on LucieShib’s postulation.

While no date has been communicated for the release of the beta test or the Shibarium documentation, the pseudonymous lead developer of Shiba Inu, Shytoshi Kusama, made a commitment earlier that it would not be “that long” before the project goes live.

The ShibArmy expects that with Shibarium launching, Shiba Inu price will recover from the recent tumble associated with broader turbulence in the crypto market. The BONE token is following suit.

Bone ShibaSwap Price Readies For A Return To $1.63

BONE price is trading in a second bullish session, as shown on the daily chart, after displaying a 37% rally on Sunday. The Bone ShibaSwap’s uptick was rejected by the resistance from the 100-day simple moving average (SMA), currently sitting at $0.952.

With the recent recovery, BONE had escaped from a descending triangle technical formation, suggesting that the sell-off, which began on November 8, may have come to an end. As such, a daily candlestick close above the 100-day SMA would illustrate the ability of the buyers to sustain the ongoing recovery.

If this happens, the BONE/USDT pair may climb higher to tag the $1.33 range high or the $4.0 psychological level above it. Overcoming these barriers would clear the path for the Bone ShibaSwap price to reach the $1.63 range high attained on September 6. Such a move would bring the total gains to 78%.

From the daily chart above, it can be seen that BONE sits on strong support downward. These include the immediate support provided by the 50-day SMA at $0.815, the 200-day SMA at $0.738, and a significant demand zone lying between $0.462 and $0.631. These areas are strong enough to absorb any selling pressure threatening to push the price lower.

Also supporting the bullish thesis for Bone ShibaSwap was the upward movement of the relative strength index (RSI), which showed that the market favored the upside. The price strength at 57 implied that the buyers had begun taking control of the BONE price.

Adding more credence to the DEX token’s optimistic outlook was the upward movement and the position of the Moving Average Convergence Divergence (MACD) indicator in the positive region. Note that the MACD had just sent a call to buy BONE on the daily chart. This happened in the early Asian trading hours on Monday when the 12-day exponential moving average (EMA) crossed above the 26-day EMA, suggesting that the market had turned bullish.

On the flip side, the failure by the Bone ShibaSwap price to rise above the 100-day SMA at $0.952 would signal weakness amongst the buyers, suggesting that the recent rally could have been a fake-out. In such a scenario, the BONE price may drop below first below the 50-day SMA and later the 200-day SMA.

In highly bearish cases, the meme-themed coin may drop lower to tag the support floors lying at $0.631 and $0.462, respectively. Market participants could expect Bone ShibaSwap price to consolidate around this demand zone before making another attempt at recovery.

As the year approaches its tail end, investors are making New Year’s resolutions just like anyone else. You promise yourself that 2023 will finally be the year when you fulfill all the goals that you missed achieving in 2022. However, for investors, it involves portfolio diversification and the investment aspect of their lives. While others cite things related to self-care, an investor looks at the instances where they missed out on projects that have since thrived. Do not be such a trader. Here is a list of projects you should definitely get into.

FightOut is the future of health and fitness, coming in the form of a brand new move-to-earn (M2E) coin in the market christened $FGHT. FightOut is a Web3.0 fitness app and gym chain which meets gamers at the point where real-life workouts and competition in the metaverse (a global first of its kind) intersect.

FGHT token is now selling for $0.01665002, where 1 USDT can acquire 60.06 FGHT tokens. More importantly, there is no minimum or maximum purchase amount for these tokens. Currently, only up to 10 billion $FHGT coins exist in total, with 60% of that number set aside for the presale stage.

FightOut project hit the $2 million milestone on Saturday and has since gone up to reach the $2.15 million mark, with a 50% bonus which will end once the $5m raise threshold has been reached.

By becoming an early investor of the $FGHT coin, you can position yourself to enjoy the current very favorable price.

Dash 2 Trade is a cryptocurrency analytics platform developed by traders for fellow traders. The platform will offer several insights, including trading signals and social analytics on-chain data, to maximize your profits.

Dash 2 Trade ICO has surged to $7.5m, with investors jumping in for the early launch. Accordingly, the investors are rushing to buy the D2T tokens. The developers said that the fourth Stage would kick off once the fundraising total hits $8,757,000, at which point D2T token price will go up to $0.0533 from the current $0.0513. Investors did not want to miss out and flocked to the discounted buying opportunity.

Now, the project is in the fourth and final Stage of the presale, having raised $10.2 million, which leaves 66.8m remaining tokens for the fourth Stage.

🚀🔥Another milestone achieved – over 10 million raised 🚀🔥

Get in before the exchange listings!

The target is set at $13,420,000, so most of the tokens have been sold already. The project has also revealed that more centralized exchange (CEX) listings are in near sight. 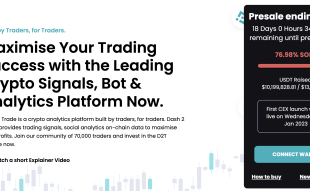 Dash 2 Trade Smashes Through $10 Million in Presale — Be A Part Of The Future!