The Super Bowl was marked by ads from some leading cryptocurrency firms such as Coinbase, FTX and CryptoCom. The appearance of these ads during this sporting event led to it being labeled as the “Crypto Bowl.”

The chief of the US Senate Banking Committee, Sherrod Brown, has lashed out at the appearance of these ads during one of the most-watched sporting events in the United States. Brown blasted the crypto firms for failing to accompany the ads with a warning of the risks involved.

Brown expressed his displeasure during the senate hearing on stablecoins. He said that most of the ads did not warn people about the volatile nature of cryptocurrencies. The companies did not address the rampant scams in the sector and ignored mentioning that the crypto sector was not as regulated as the traditional sector.

Buying an ad during the Super Bowl can be very costly, with a 30 seconds ad estimated to be worth around $20 million. Brown said that the companies were investing such high amounts to increase their profits by reaching out to many people. He also argued that if cryptocurrencies could be used as money, these companies did not need to promote it.

“The fact that these companies felt the need to advertise at all is a bit of a giveaway about one of their major claims – if this were actually meant to be used as currency, why would you need to buy ads? I’ve never seen the Federal Reserve buy a multimillion-dollar commercial for US dollars,” he said.

The Crypto community lashes out

The crypto community did not stay quiet on the remarks made by Brown about the cryptocurrency ads. One Twitter user said, “As if ‘fiat’ currencies have never had issues with transparency, use illegality, being untraceable, used worldwide in criminal ways, and the like. Fear-uncertainty-doubt rules the day for some.”

Another user said that Brown failed to understand the concept of cryptocurrencies and that he needed to invest in learning more about digital assets. The user even urged Brian Brooks to go for another hearing to teach the senator more about cryptocurrencies.

During the hearing, Brown also advocated against the use of stablecoins. He said that stablecoins endangered the economy of the US. Earlier, the US Treasury stated that stablecoins posed a threat to monetary policy and could affect the US dollar’s value. 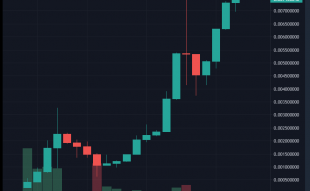 Lucky Block back at ATH, its Crypto Lottery Pool over $5 Million