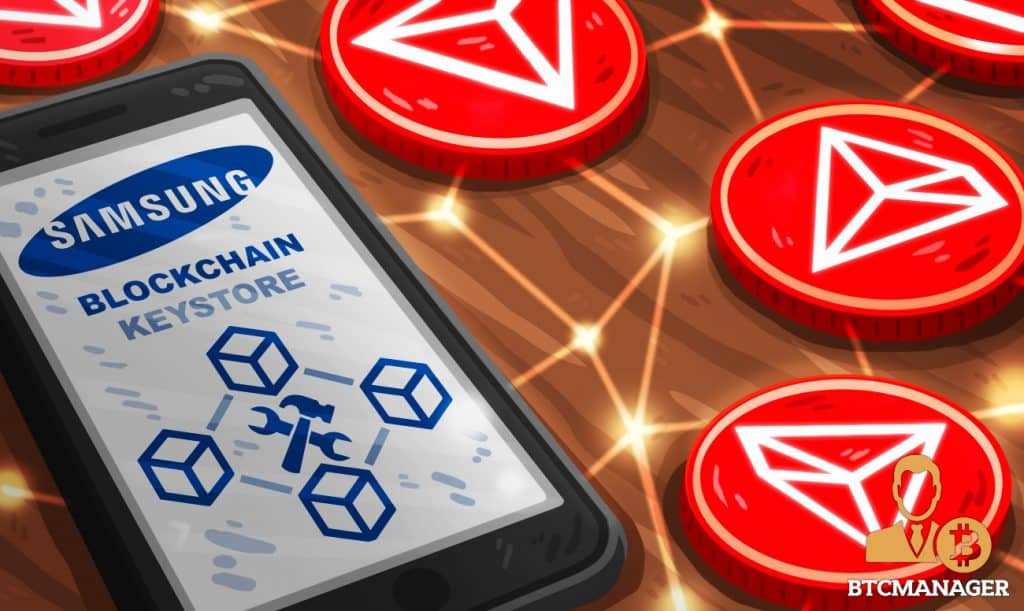 Samsung, one of the largest and most popular manufacturers of mobile phones in the world, has been making several moves into the cryptocurrency market. In what is one of the South Korean tech giant’s biggest pro-crypto endeavors to date, the company has now announced that it has integrated support for TRON into its product suite.

According to a release note published on the Samsung Developers platform on October 29, Samsung revealed that the Blockchain Keystore, its native decentralized app marketplace, had provided support for Application Program Interfaces (APIs) that support transactions in TRON.

In addition to the support for TRON, Samsung also announced that it would be launching its new Samsung Blockchain Platform SDK at the Samsung Developer Conference later this year. SDK will ensure developers can build DApps that are compatible with mobile devices, while also ensuring that security and user safety is optimized.

Essentially, this move increases the reach of the cryptocurrency, while also ensuring that Samsung can appeal to an even wider base of crypto assets. By integrating TRON into its map store, Samsung is also making sure that APIs that confirm to TRC 10 or 20 standards will be accessible to anyone who has the Blockchain Keystore.

The partnership between Samsung and TRON is rather peculiar, although Justin Sun, the developer of the asset and head of the TRON Foundation, has done his bit to give it up. On October 25, the Chinese developer with a penchant for grandiose announcements took to Twitter to reveal that his company would be partnering with a “$100 billion megacorporation” this week, urging people to keep an eye out for any announcements.

His tweet read, “TRON will partner with a hundred billion USD megacorporation next week. It will not only benefit $TRX but all TRC10&20 tokens, including $BTT & $WIN etc. It will broadly distribute TRON Dapps and tokens to billions of customers. TBA. Make a guess?”

Considering the number of companies that are worth at least $100 billion, it was anyone’s guess whom Sun was referring to. However, some people did guess right, as they touted the possibility of the company being Samsung. The company has been doing pretty well in its venture into crypto, so the partnership seemed like a proper match.

Gradually, the Keystore is getting bigger

The move makes TRON the latest cryptocurrency to gain support on the Blockchain Keystore. Ever since it was launched in July, the Keystore has been a big part of the Samsung SDK, and apart from TRON, it also supports Ether, Bitcoin, and Klaytn (a crypto asset developed by Korean Internet company Kakao), with the latter two being added back in August. The Keystore is currently available on six of Samsung’s flagship devices; the Galaxy s10e, s10, s10+, s10 5G, Note 10, and Note 10+. However, its reach is still limited, as it is only available in Spain, Canada, the United States, the United Kingdom, Germany, Switzerland, and South Korea. Support for other countries is expected to be added as time goes on.