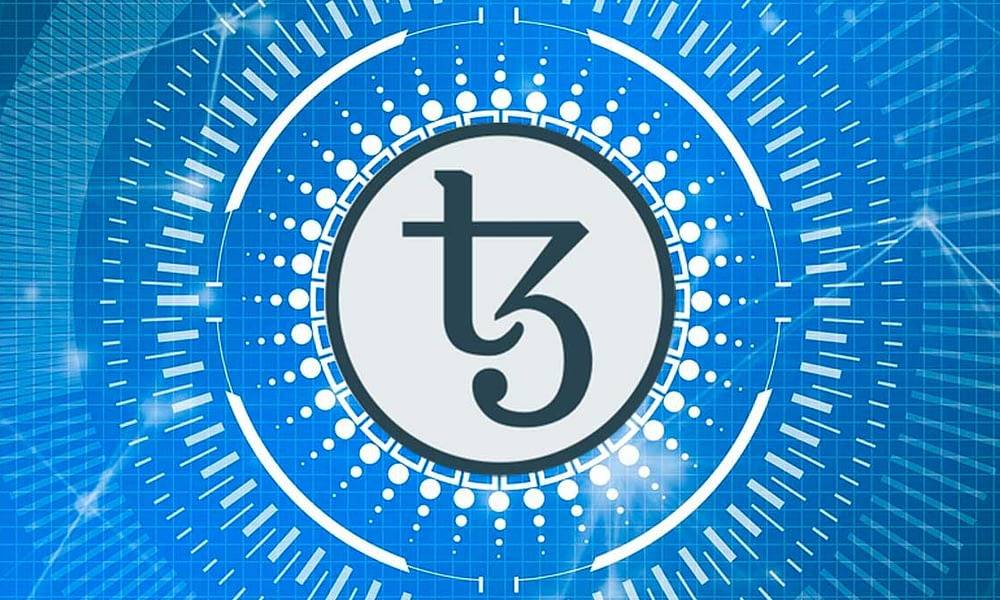 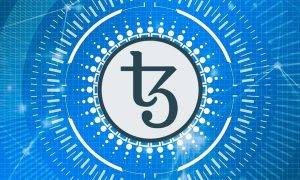 Tezos (XTZ) turned away from its downtrend on Tuesday to an impressive 51% after news that Ubisoft’s new NFT platform is built on Tezos blockchain went viral. Tezos price is up approximately 30% in the past 24 hours. Its daily trading volume has rallied a massive 498% to $1,476,629,835 in the past 24 hours with the market capitalization leaping 27% to $4.65 billion. XTZ is now position at 40 on CoinMarketCap and teeters around $5.4550.

The year 2021 has been great for the crypto industry and apart from market leaders, Bitcoin and Ethereum, recording new all-time highs (ATHs), the rising popularity if Non-fungible tokens (NFTs) coupled with the emergence of decentralised finance (DeFi) blockchain networks has increased the mass adoption of the blockchain technology.

The project behind the Tezos network has significantly benefited, particularly with its focus on NFTs and the environmental concerns that have always gripped the crypto space. As a layer 1 smart contract protocol, Tezos (XTZ) is capable of improving its network without requiring a hard fork.

According to the data from TradingView, Tezos bounced from the December low around $3.45 rising 70% to a high of $5.894 on Tuesday. Three things have been credited for the recent uptick in XTZ/USD price:

Tezos has partnered with Ubisoft, one of the world’s largest digital gaming companies, which is launching its new Ubisoft Quartz NFT that will be built on the Tezos blockchain. Announcing this partnership, the Tezos team tweeted:

.@Ubisoft Quartz is built on @Tezos, an energy-efficient and self-upgradable Proof of Stake blockchain.

Games based on blockchain platforms have gained traction in 2021 and a partnership with one of the largest video game makers in the world could lead to long-term bullish outcomes for Tezos (XTZ). The beta version of the Ubisoft Quartz is scheduled for launch tomorrow December 09. It will be open to players of Tom Clancy’s Ghost Recon: Breakpoint and players who meet certain criteria will be able to claim three free cosmetic NFTs from drops for early adopters of the platform.

According to their latest report “the total annual carbon footprint of the Tezos blockchain is equivalent to the average energy footprint of 17 global citizens.” The company behind the Tezos network has a goal of reducing the energy required to operate the network. It has a reported a 70% increase in energy efficiency on a per-transaction basis for the network in 2021, this is 30% less than in was in 2020.

In accordance with the requirements of ISO 14040 and 14044 standards, the Tezos Life Cycle Assessment – conducted by PricewaterhouseCoopers Advisory SAS – a French member firm of the PwC network of member firms –  looked at the energy consumption and carbon footprint of nodes on the Tezos network and was subject to a critical review by an independent expert hired by Nomadic Labs.

Tezos Energy Consumption at a glance:

The low carbon footprint of Tezos means developers and users can prioritize innovation without compromising sustainability.

There has been a spike in transaction volume and protocol revenues on the Tezos network in the recent past. The protocol revenue has hit its highest in 2021. From the graph below, it can be seen that the daily XTZ trading volume peaked at $369 million on December 03, which is a hint that some investors had caught wind of the Ubisoft news. 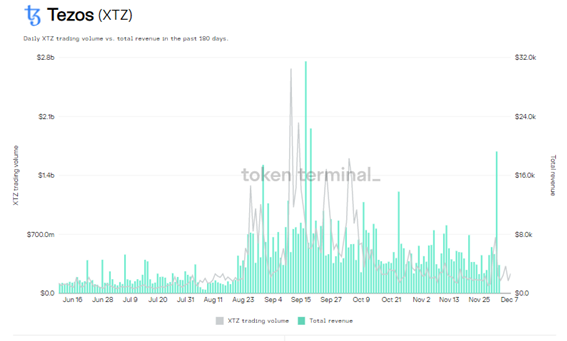 The spike in activity and revenue came as Tezos announced the completion of its Hangzhou upgrade. This is the eighth protocol upgrade for the Tezos network demonstrating the project’s ability to self-amend and self-upgrade without the need to conduct a hard fork.

The rally was stopped by the $5.83 major resistance level. A rise above this level could trigger massive buy orders that are likely to push Tezos upwards $7.00 psychological level.

Note that the parabolic SAR has just flipped from negative to positive and moved below the price suggesting that XTZ market momentum is now bullish.

Moreover, the MACD has just sent a buy Tezos signal on the daily chart. This happened today when the 26-day Exponential Movign Average (EMA) (blue line) crossed above the 26-day EMA (orange) accentuating the bullish narrative .

Where To Buy Tezos Now

If you are looking for to buy cryptocurrencies such as  Tezos (XTZ), global crypto exchanges such as eToro are worth a look. Read our guide on the  best trading platforms for a review of eToro to find out more about the pioneer on social trading.

With eToror, there are no trading fees, with the platform making its money in the spread between the bid and ask price. The minimum trade size for crypto assets is $25. 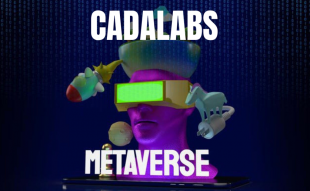 Cadalabs protocol has been making waving in crypto community since its inception on cardano ...