Given the recent crash in cryptocurrency values, some investors may have sought refuge in the year’s most hyped token presale.

There was a complete sellout of Tamadoge (TAMA) during the presale on Tamadoge.io. Despite the unstable state of the cryptocurrency market, this occurred.

At now, Bitcoin has lost 6% of its value during the past day. The day’s low for Binance was $18,670. As Wednesday’s FOMC meeting approaches, it’s possible that traders are reducing exposure to risk.

In the next step, investors will be able to retrieve their TAMA tokens. Information on how to do this securely will be made public on the project’s official Telegram and Discord channels on September 20.

It’s not likely that an administrator will direct message you first, so watch out for those who are frauds. Additionally, Tamadoge investors can elect to receive updates via email. LBank is one of those major exchanges that announced last month on Twitter that they will be listing TAMA.

Uniswap will also host the initial DEX offering (IDO) of Tamadoge, an ERC-20 token. It has been decided to set TAMA’s listing price at $0.03.

The Tamadoge presale allegedly ended sooner than expected, and the team is now proceeding with listings for all TAMA cryptocurrencies on exchanges.

Over the course of the weekend, over a million dollars was raised thanks in part to coverage on CNBC of a new cryptocurrency token that might increase in value by a factor of 10 or more.

BeInCrypto, NewsBTC, and other prominent cryptocurrency media outlets have all featured Tamadoge.

As noted by Jacob Crypto Bury above, on Sunday, a Tamadoge was acquired on Etherscan for the equivalent of 55.8 ETH.

The trade might turn out well, as Ethereum has dropped 10% in value in the past day.

During London Metaverse Week, Carl Dawkins who happens to be the Head of Growth at Tamadoge spoke at a symposium on Blockchain and NFT. A number of other TAMA holders joined him.

Since investor mood and anticipation are strongest during the early stages of a new cryptocurrency project, presales and ICOs for these tokens generally exceed negative circumstances, even if the launch day is a red day.

It’s possible that Bitcoin’s value may increase following FOMC Day, which will be covered in real-time on Crypto News. 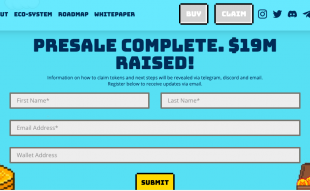 Join Our Telegram channel to stay up to date on breaking news coverage Large ...