Tamadoge has launched a true market revolution by raising a total of $10 million, even though it is just in the fourth round.

TAMA, a native token, has a total quantity of 2 billion, with half available for purchase by early purchasers during the presale.

The price for 100 TAMA during the first stage, the beta auction of 200 million tokens, was 1 USDT. Since then, over 100 million tokens have been sold, with the price rising with each successive phase.

The price is 50 TAMA for 1 USDT, which is constantly rising, so you only have a little time to get your tokens at a reasonable cost.

For example, in the sixth phase, the price is predicted to be 44.44 TAMA for 1 USDT. The tranche will be extended until the initial cost does not exceed $0.03, which is three times the beta auction price.

Tamadoge is, however, more than just numbers. Behind it is are significant efforts that should maintain this currency at the pinnacle of the list for a long time. The token has enhanced all failures and declines of famous meme currencies such as Dogecoin, Shiba Inu, Dogelon Mars, and Apecoin.

Tamadoge developers have learned a valuable lesson from those too, and the game is now far more appealing to potential purchasers.

Tamadoge is a Shiba Inu meme-inspired coin built on the Ethereum blockchain, like Dogecoin. TAMA, the Tamadoge ecosystem’s native currency, is supposed to have no transaction tax.

The Tamadoge team has opted to go with the “no-tax” approach, discerning that the token’s value should be generated from the intrinsic worth of the project rather than just speculative trading.

Tamadoge pets are at the heart of the Tamadoge initiative.

Users will soon be able to transport the NFT-powered animals across multiple blockchain-based metaverses, dramatically improving their utility and resale value.

Tamadoge Pets may be purchased through the Tamadoge NFT Pet store, which is set to open in early 2023.

With a presale TAMA token price of around $0.015 and a total supply of 2 billion tokens, Tamadoge’s fully diluted hard cap is $19 million.

With Tamadoge having crossed the $9.5 million mark today, it has already passed the 50% hard cap mark.

TAMA’s market cap, on the other hand, might fluctuate significantly if the token becomes available to the general investing public following the CEX listings scheduled for early 2023.

TAMA’s maximum supply is limited to 2 billion. Half of it will be accessible at the token generation event (TGE), with 400 million remaining unminted and earmarked for exchange listings.

The following tokenomics model will be used by the team:

Tamadoge – The New Doge on The Block

Tamadoge – the play-to-earn (P2E) game built on the Tamaverse allows gamers to grow, breed, teach, care for, and combat with their Tamadoge pets to earn rewards that will enable them to qualify for in-game rewards via TAMA tokens.

It is expected to be one of the most profitable cryptocurrencies in 2022. Tamadoge is a deflationary cryptocurrency token and a new meme coin released in July 2022 with the express purpose of dethroning Dogecoin as the new king of meme currencies.

The P2E game allows players to compete against one another to collect Dodge points, allowing them to get to the top of the scoreboard.

TAMA, the Tamadoge platform’s native token, is now in its presale period, when token aficionados may purchase 1 TAMA for $0.01.

When the correct presale begins, early TAMA token owners are likely to benefit more than tenfold based on the known fact that equivalent meme currency, Dogecoin, surged in value by 12,000% between January 2021 and May 2021. You can read the full whitepaper and roadmap at Buy.Tamadoge.io

Tamadoge began with a two-stage presale. The first was the beta presale, where tokens were offered for $0.01 with a hard cap of $2 million.

After the ceiling is achieved or the beta presale ends on September 2nd, the public presale will begin, with the TAMA token increasing in price by 25% to $0.0125.

The public presale is planned to end in Q4 2022, or when a further $8 million is raised. Tamadoge has raised almost $10 million since July 22nd, indicating that investors have well received the initiative.

While the beta presale is scheduled to end on September 2nd, considering the level of interest Tamadoge is seeing, it is possible that it may sell out much sooner.

As a result, this is a great moment to invest before prices rise in the general presale. Also, after the global presale, Tamadoge will have a confirmed centralized exchange (CEX) listing on LBank, which will likely considerably increase the price of TAMA.

The Tamadoge token, which will be traded under the ticker TAMA, is presently only available to presale investors.

Initially, customers could claim 66.67 TAMA for 1 USDT. In stage 2 of the Tamadoge coin auction, the bonus is expected to fall to 57.14 TAMA per 1 USDT. Users can partake in the TAMA token presale using Tether (USDT) and Ethereum (ETH).

The least quantity of TAMA that may be purchased is 1,000 tokens, which is around $15 based on TAMA’s average presale token price. 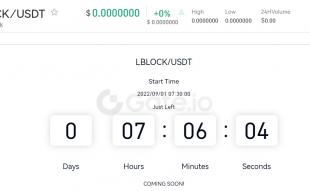