Homenewsmakerdao gets 1 5 interest on usdc from coinbase

Major cryptocurrency trading platform Coinbase is interested in forming a partnership with MakerDAO, the most prominent decentralized lending platform.

Coinbase has made an offer to pay MakerDAO 1.5% interest on its USDC assets if Maker transfers those holdings to Prime, which is Coinbase’s institutional-grade investing platform.

Coinbase Institutional stated in a proposal titled “MIPXX Coinbase USDC Institutional Rewards” published on MakerDAO’s online forum that the offer will address MakerDAO’s issue of having too much exposure to the dollar-pegged stablecoin for which it receives no incentive.

More specifically, if the Maker Improvement Proposal (MIP) is approved, it will bring MakerDAO onto Prime as an institutional investor. It will also make it possible for 1.6 billion dollars, of the Ethereum-based cryptocurrency lender’s USDC holdings to be transferred to MakerDAO’s account on Prime, which would result in earnings of around 24 million dollars in one year.

Other terms include that MakerDAO does not pay a custody charge, despite the fact that it is still able to freely mint, burn, withdraw, and settle almost instantaneously with USDC in accordance with the usual offering that Coinbase Prime provides.

Coinbase is described as being “uniquely placed” to make the offer in the proposal. This refers to the fact that Coinbase is an established, respectable, and regulated business.

Coinbase Prime is slated to get 33% of the Peg Stability Module that MakerDAO develops, as stated in the proposal (PSM). It is reasonable to assume that Coinbase’s overall assets amount to $528 million.

The custodial rewards program offered by Coinbase Prime is where the profits from the investment will be realized. Additionally, the platform provides its members with an annual percentage yield of 1.5% in return for safekeeping of their assets.

Should the arrangement be granted, it will result in an additional 24 million dollars in yearly income for MakerDAO.

Both the interest that is earned on the assets that are held in custody by Coinbase and the funds themselves will be denominated in USDC. They put out the idea in response to MIP 13, which was initially brought up on the MakerDAO forum earlier on in this year.

Due to the way DAO is governed, the release of collateral assets is required in order to integrate evaluation criteria such as safety, cost structure, and flexibility.

According to the proposal that was presented by Coinbase, the firm is suitable for the role because of the large market position it now holds. In addition, the platform mentioned that the majority of Maker’s assets are USDC, which do not at this time earn any holding advantages.

Coinbase has given free liquidity optimization and industry-leading security for Maker, in addition to the annual percentage yield of 1.5% in USDC that it is now offering. As a direct consequence of this, Maker will not be responsible for paying any custody fees for USDC that is held on Coinbase Prime.

What Are MakerDAO’s Setbacks?

MakerDAO is a platform for the creation of collateralized debt that enables users to mint the network’s DAI stablecoin by utilizing other users’ assets as collateral.

It initially only took ETH as collateral, but since then, it has increased its acceptance to include over a dozen more assets.

According to the data provided by Dai Stats, USDC is responsible for more than a third of the total locked value of $9.3 billion. The proposal is the result of an effort by Rune Christensen, the founder of MakerDAO, to repair the design of the protocol and address a number of issues.

For example, the United States government has imposed restrictions on Tornado Cash, and there is widespread worry that subsequent sector sanctions may lead to the failure of stablecoin providers such as MakerDAO.

How did MakerDAO’s Users React?

The MakerDAO community did not have a very positive take to the proposal, with many members predicting that it would result in tragedy.

This is because Coinbase has had many run-ins with US authorities in the past, and there is always a risk involved when you put your money to a centralized entity.

In addition, the recent failures of businesses like as 3AC and Celsius have only served to heighten these fears further.

Solvency concerns have been reduced because to Coinbase’s establishment of a liquid account for MakerDAO.

On the other hand, many individuals decided to disregard the dangers and instead concentrate on the upside, which was more funding for the DAO.

The strategy has the potential to solve the issue of underinvestment facing MakerDAO while also encouraging asset diversification through the use of a lower-risk investment.

The idea has received support from participants of MakerDAO’s central units, such as those of the Growth Core Unit, the Collateral Engineering Services Unit, and the Strategic Finance Core Unit.

It has been confirmed by Jenn, a core team member that MakerDAO and Coinbase have worked together.

In addition, the implementation of this idea marks yet another key turning point in the ongoing relationship between the two institutions. 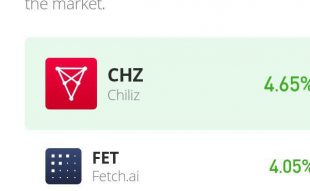 Join Our Telegram channel to stay up to date on breaking news coverage Chiliz ...