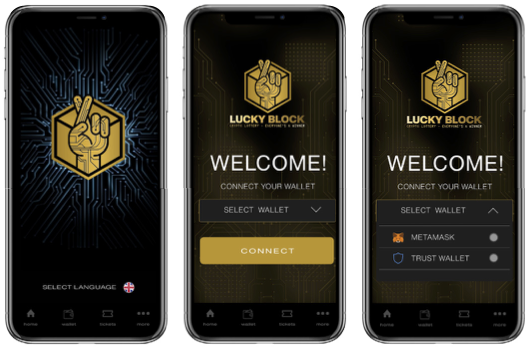 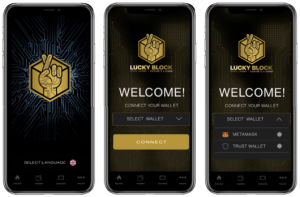 The app of the Lucky Block lottery platform is undergoing rapid development, and we have been given access to the latest storyboards and information on the dev team’s progress – see the screenshots at the end of this article.

Set to launch on the 21 March, the devs have already successfully hooked up calls to the smart contract, while in parallel the user interface is going through design iterations to expose functionality to users in the most intuitive way.

Lucky Block is built on the Binance Smart Chain, which means the transaction throughput is far superior to Ethereum (and the gas transaction costs are a fraction of those on Ethereum). This means Lucky Block app users won’t face the congestion issues encountered by Ethereum-based decentralised app (dApp) users.

The latest app news comes hot on the heels of volatile trading in the native token of the lottery platform, LBLOCK.

After reaching north of $0.003000, the price has fallen back in recent days. The largest drop was seen yesterday as confusion  – some would say FUD – swirled about supposed transfers out of the Royalty fund wallet – turns out analytics site DexTools was wrongly labelling transfers in as being transfers out.

A cursory glance at the transaction data on Bscscan shows the transfers in taking place regularly, where 4% of sale proceeds goes to the royalty fund as part of the transaction fee levied on all sell transactions (but not buys). See the screenshot below.

The LBLOCK price at one stage was down 50% as panic selling set in after a video began to circulate erroneously claiming funds were being siphoned off by insiders. LBLOCK fell below $0.001000, but has since recovered to $0.001260. 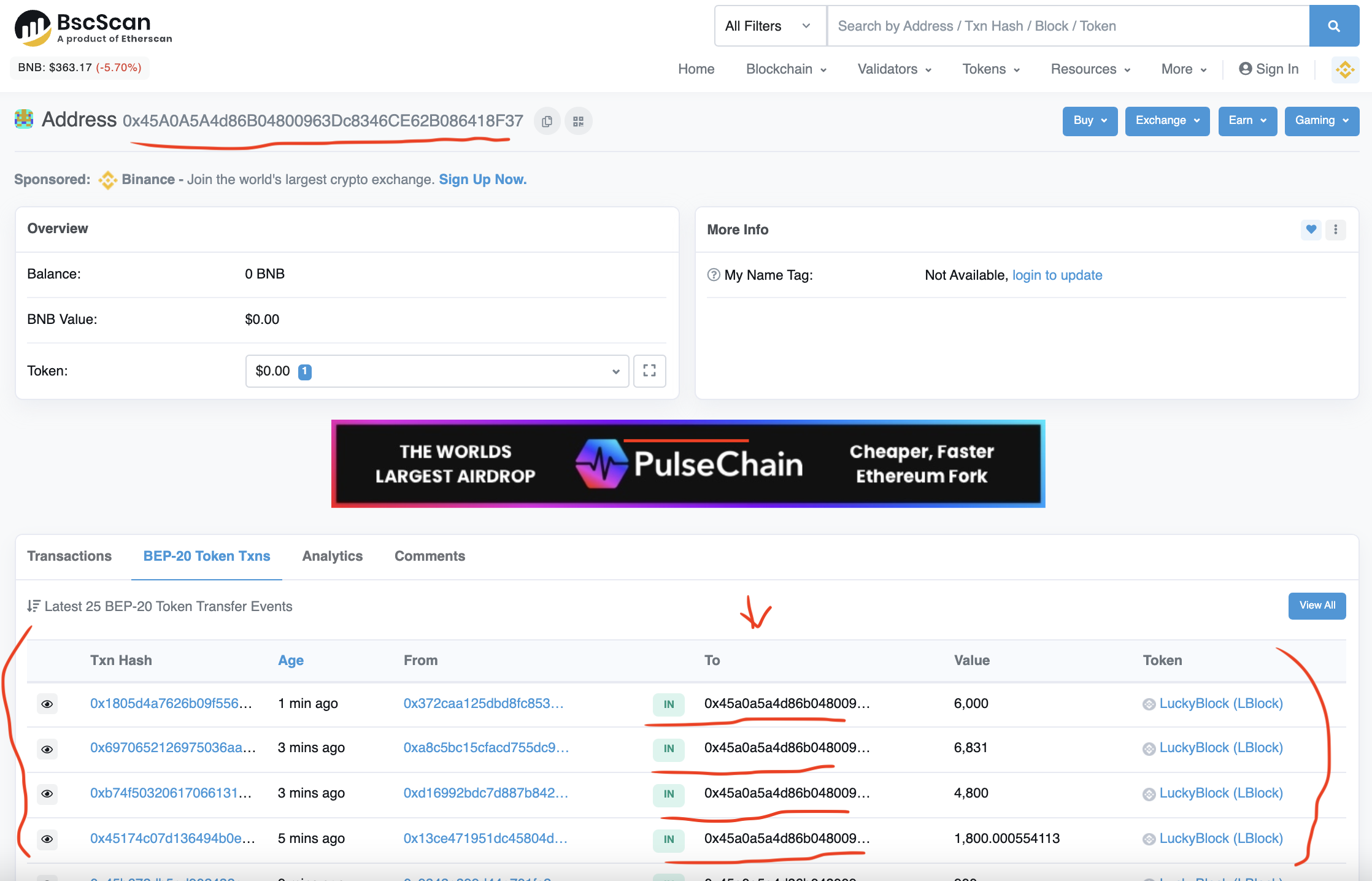 Following the confusion and charges of malfeasance levelled at the team, there have also been queries about the other addresses where funds are held.

But here at insidebitcoins we’ve taken a look and everything is in order, as can be gleaned by querying Bscscan with the addresses below. 20% of total supply goes to strategic partners, 20% to the team and 22.5% to marketing and CEX listings:

Does Lucky Block need to be licensed to be in App Stores?

There has been other FUD circulating about the project around the question of regulation. This is a more serious point.

Does Lucky Block require a licence to operate?  Would the app be banned from the iOS App Store, for example, for being non-compliant in jurisdictions in which it operates? The answer to both those questions is no for the simple reason that the lottery is not played with real money and/or as a lottery run on a decentralised network, is not therefore subject to Real Money Gambling rules.

Here’s the relevant part of the iOS App Store guidelines:

5.3.4 Apps that offer real money gaming (e.g. sports betting, poker, casino games, horse racing) or lotteries must have necessary licensing and permissions in the locations where the App is used, must be geo-restricted to those locations, and must be free on the App Store. Illegal gambling aids, including card counters, are not permitted on the App Store. Lottery apps must have consideration, chance, and a prize.

It could be argued the issue here isn’t really real money gambling so much as whether as a lottery Lucky Block needs to be licensed in the jurisdictions it operates in.

Although lotteries are regulated in most jurisdictions, those that are hosted on decentralised networks are not currently required to seek a licence in the jurisdictions of major economies. The fact that crypto lotteries do not use real money gaming further underlines this interpretation, the team at Lucky Block believe.

These and other issues will be addressed by Scott Ryder in an AMA (ask me anything) on Telegram at 3.00pm GMT today:

Now let’s get to the app storyboards. The storyboards are divided into three slides to show the user journey. 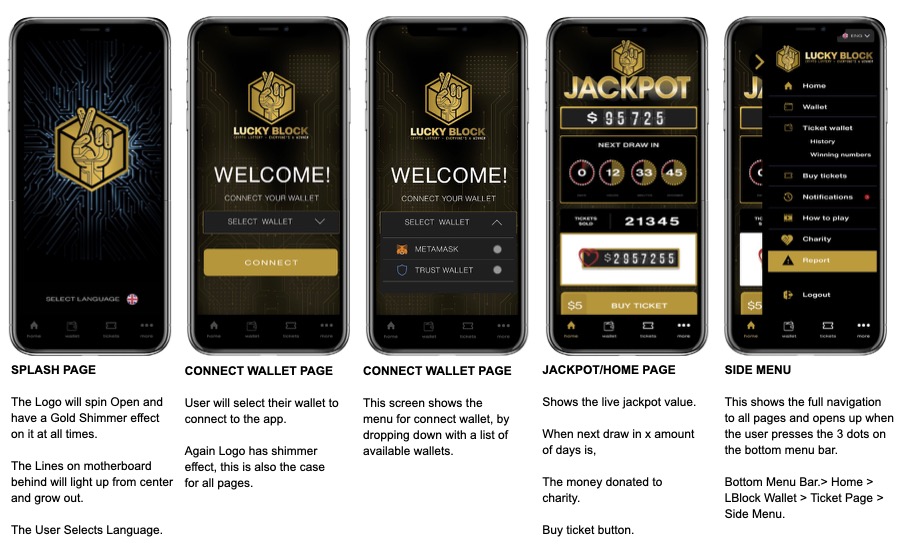 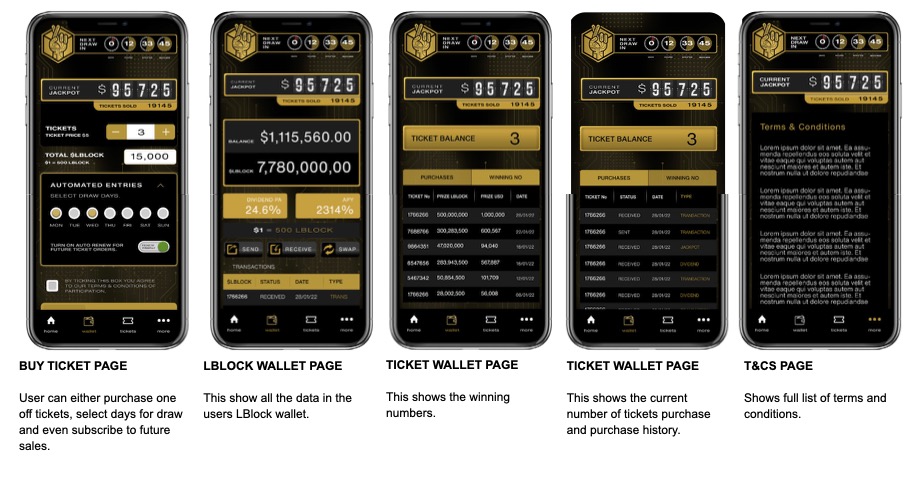 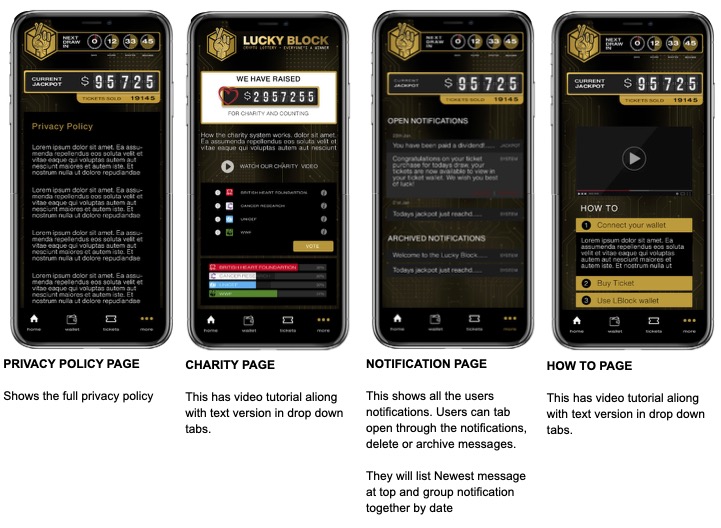 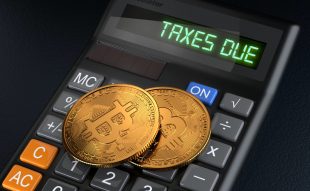