Homenewslitecoin price prediction three reasons why ltc may return to 100

Litecoin (LTC) price started a recovery toward $100 as investors scrambled to seek a safe haven for their investments following the FTX-induced crash. However, the price was rejected by the $80 psychological level causing LTC to turn down to the current price of around $72. Due to the recent price downturn, the majority of LTC investors are in losses. However, for another move upward, Litecoin may need support from the wider market.

Here, an analysis of Litecoin’s recent price action is presented giving reasons why an upside correction could be on the radar for the altcoin.

Litecoin started a recovery rally toward the $100 psychological level on November 22, recording an impressive 33% climb to brush shoulders with $83.5 on November 25. Buyers’ attempts to pump the price higher were frustrated by overhead pressure from the $80 supply zone. At press time, the 13th largest cryptocurrency by market capitalization was trading below $75. Buyers were required to reclaim this level to rekindle any hopes of restarting the uptrend.

LTC was trading above an important support area stretching from $57 and $60. Traders will notice that all the important moving averages are lying within this zone. The 50-day simple moving average (SMA), the 100-day SMA and the 200-day SMA are sitting at $59.73, $57, and $58 respectively. Buyer congestion in this zone is likely to provide Litecoin price with the tailwinds it requires to propel it upward.

Therefore, if LTC turns up from the current level, it could confirm the beginning of an uptrend that is likely to take the proof-of-work (PoW) crypto first above the immediate resistance at $75, and then to the $83.5 swing high. Above that, Litecoin could rise to confront resistance from the $100 psychological level, representing a 14.8% ascent from the current price.

Apart from the significant demand zone, technical indicators on the daily chart supported Litecoin’s positive outlook. The Relative Strength Index (RSI) was moving within the positive region suggesting that the market still favored the upside. Moreover, this momentum strength indicator was positioned at 60, suggesting that LTC was still under the control of buyers, adding credence to the bullish outlook.

Another indicator validating the positive forecast for LTC price was the position of the Moving Average Convergence Divergence (MACD) indicator above the zero line in the positive region. This indicated that Litecoin’s market sentiment was still positive. In addition, the movement of the 12-day exponential moving average (EMA) (blue line) above the 26-day EMA added credence to the crypto’s positive outlook.

Furthermore, the technical indicators had previously sent two bullish signals in the recent past which were still in play. The first one came from the SuperTrend indicator which reversed from red to green and moved below the price on November 23. This index, like the moving averages, overlays the chart while tracking LTC’s trend. It incorporates the average true range (ATR) in its calculations, which helps gauge market volatility. As long as the index is green and stays below the price, bulls are likely to remain in an advantageous position.

Another buy signal came on November 24 when the 50-day SMA crossed above the 200-day SMA. Thus, as long as the golden cross stands, it is imperative to say that the Litecoin price is squarely in the buyers’ hands.

The daily chart above showed that Litecoin was trading above a relatively strong support zone. Included within this area were the moving averages located between $57 and $60. Further down, bears would be confronted by buying pressure from the psychological level at $55, besides the $54 foothold.

This was supported by on-chain metrics from IntoTheBlock’s Global In/Out of the Money (GIOM) model, which showed that LTC sat on relatively robust support. For example, all the lines of defense outlined above are within the $54.7 and $60.70  price range, where approximately 12.6 million LTC are being held by roughly 842,900 addresses.

Any attempts to push the price below the said level would be met by buying from these investors who may want to increase their profits. The ensuing demand pressure would cause Litecoin to rise even higher.

Litecoin’s upward trajectory may also be fueled by positive comments about the altcoin from crypto Twitter. For example, a trader going by the name JK on Twitter spotted that the LTC price action had formed a double-bottom against Ethereum on the daily chart. He posted an LTC/ETH chart on Sunday saying, “Litecoin LTC completed double bottom to gain 65% against ETH in November.”

This was confirmed by a veteran trader Peter Brandt who, drawing from his approximately five decades of trading, hailed JK’s “correct interpretation of classical chart patterns”.

Note that a double-bottom is a highly bullish chart formation pointing to a major change in price movements from a prior downtrend. Overall, the “digital silver” has had a positive November. Litecoin briefly decoupled from the general market downturn to outperform the top-cap cryptos for the most part of November. At press time, LTC is up 20.57% for the month, according to data from CoinMarketCap.

Data from Santiment, an on-chain analytics company, shows that LTC’s price growth coincided with a sharp increase in addresses holding 1,000 or more LTC since May this year. This was an indication of increased interest by large holders in Litecoin as they added to their holdings in anticipation of a continued increase in price.

Another positive fundamental supporting Litecoin’s upside is the halving event expected in less than a year’s time. According to information shared by Litecoin Foundation, the organization behind Litecoin crypto, the next halving is expected to occur within approximately 250 days.

Like Bitcoin, Litecoin has a fixed supply. However, instead of Bitcoin’s maximum supply of 21 million BTC, it is 84 million LTC. In simple terms, a Litecoin halving means that the rewards awarded to miners will be halved as the coin becomes scarcer.

The next Litecoin Halving will be in 250 days!
⚡84,000,000 Max Supply
⚡2.5-minute block intervals
⚡Halving event every 4 years
⚡Become scarcer over time
⚡Decrease in supply, demand rises

The reward amount is currently 12.5 LTC. However, after the forthcoming halving event, this will be cut in half to 6.25 LTC. This trend is expected to continue until 2124.

Furthermore, the Litecoin network has processed its 135,000,000th transaction in what it describes as “over 11 years of continuous, immutable, uncensorable, flawless uptime.”

With the greater crypto market still struggling to recover from the FTX disaster and the possible bankruptcy of other key market players, it may be a good time to explore buying at a discount other altcoins that haven’t pumped recently or investing in lower-cap projects in presale.

Three projects that have already raised a significant amount of capital in their presales and are poised for future growth are Dash 2 Trade (D2T), RobotEra (TARO), and Calvaria (RIA) all of which have promising returns once they are listed on exchanges in the near future.

Dash 2 Trade is a decentralized exchange built on the Ethereum blockchain that is set for launch early next year. The team behing D2T has so far raised $7.3m raised with so 83% of tokens in stage 3 of the presale sold. In the fourth and final stage of the presale, the D2T price will rise to $0.0533.

TARO is an Ethereum-based sandbox Metaverse due to launch its alpha version in Q1 2023 and will enable players to build and play as robots within a virtual world based on NFTs. RobotEra has surpassed the quarter of a million dollars milestone with approximately $266,000 raised in the ongoing presale.

Calvaria is a blockchain-based card-trading game enabling players to battle with their NFT cards and earn rewards. RIA, the platform’s native token is currently in the last stage of the presale with over $2.1 million raised and only 30% of tokens left. 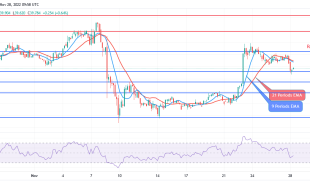 Join Our Telegram channel to stay up to date on breaking news coverage Sellers’ ...