In an instant message to Edward Zhao of Three Arrows Capital on May 11, Scott Odell, an analyst at the British cryptocurrency lender Blockchain.com, requested that the Singapore hedge fund repay at least a portion of a $270 million loan. The collapse of the cryptocurrency Terra had recently cost Three Arrows money, casting uncertainty on its capacity to make payments. Blockchain.com was concerned about this since it had not used collateral to secure the loan, according to court documents.

With regard to the reimbursement, Odell remarked, “This is time-sensitive, so let’s sort it out if you’re available.” Zhao didn’t know what to say.

In July, Three Arrows declared bankruptcy, and according to Blockchain.com, it has failed to recoup even a single cent of its loan. One of the affidavit documents liquidators submitted as part of the hedge fund’s liquidation procedures is the text exchange.

When contacted for comments, Three Arrows did not provide any. Zhao was inaccessible, and Odell declined to comment.

According to a Reuters investigation of bankruptcy court and regulatory records and interviews with nearly 20 executives and experts, the loan was a component of a murky network of unsecured lending between crypto businesses that exposed the industry when cryptocurrency prices dropped 50% earlier this year.

Institutional crypto lending entails lending both cash and cryptocurrency in exchange for a yield. Lenders can charge higher rates and increase profits by forgoing the requirement that borrowers post collateral, such as equities, bonds, or more frequently, other crypto tokens, while borrowers can swiftly earn cash.

According to chief business officer Lane Kasselman, Blockchain.com has now mainly stopped its unsecured loans, which had been 10% of its income. He stated, “We’re not willing to participate in the same amount of risk,” but added that the business will still provide “very restricted” unsecured loans to its most valuable customers under specific circumstances.

Examination of filings and the interviews show that unsecured lending has become typical throughout the cryptocurrency sector. Despite the recent upheaval, several experts in the sector predicted that the practice will probably continue and even expand.

Alex Birry, chief analytical officer for financial institutions at S&P Global Ratings, says that unsecured lending is actually increasingly popular in the cryptocurrency sector. He noted that the “concentrated environment” of cryptocurrencies increased the danger of contagion within the industry.

He stated of the summer collapse of lenders, “So if you are just lending to people working in this ecosystem, and especially if the number of these counterparties are very restricted, sure, you will see occurrences such as the one we’ve just experienced.”

Crypto Up and Down Waves

During the pandemic, crypto lenders—the de facto banks of the cryptocurrency world—exploded, luring ordinary clients with double-digit rates in exchange for their cryptocurrency deposits. The lenders made money from the differential when institutional investors like hedge funds who wanted to make leveraged bets paid higher rates to borrow money from them.

Unlike traditional lenders, crypto lenders are not mandated to keep capital or liquidity buffers, and several of them found themselves exposed when a lack of collateral forced them—and their customers—to bear significant losses.

Voyager Digital, which declared bankruptcy in July and became one of the largest casualties of the summer, offers a view into the explosive development of unsecured crypto lending. According to the company’s regulatory filings, the New Jersey-based lender’s crypto loan book increased from $380 million in March 2021 to roughly $2 billion in March 2022, and it only required security for 11% of that $2 billion.

After Three Arrows missed a payment on a crypto loan worth more than $650 million at the time, the lender went under. Voyager did not disclose liquidating any collateral due to the default, and Three Arrows classified its collateral status with Voyager as “unknown,” according to the companies’ bankruptcy papers, despite the fact that neither party has explicitly stated whether this loan was unsecured. Voyager declined to respond to questions for this story.

According to court documents, competing lender Celsius Network, which also declared bankruptcy in July, also provided unsecured loans, though it is uncertain how much. Due to the fact that the majority of loans are private, it is impossible to determine the total amount of unsecured lending in the sector, and estimates from even people working in the industry vary greatly.

For example, the crypto research firm Arkham Intelligence estimated the amount to be around $10 billion, while the crypto lender TrueFi estimated it to be at least $25 billion. Co-founder Antoni Trenchev of the cryptocurrency lender Nexo claimed that his business had rejected requests for unsecured loans from investors and traders. According to him, the total amount of uncollateralized lending in the sector is “possibly in the hundreds of billions of dollars.”

Optimism on the Lending Scene

While Blockchain.com has mainly stopped offering unsecured loans, many cryptocurrency lenders are still optimistic about the industry. Although they did not say how much of their loan book would be un-collateralized, the majority of the 11 institutions interviewed said they would still offer such loans.

BlockFi, a significant cryptocurrency lender, will keep up its strategy of only providing unsecured loans to elite clientele for whom it has reviewed audited financials, according to Joe Hickey, global head of trading. According to BlockFi, which was bailed out by cryptocurrency exchange FTX in July after it blamed losses on a loan and boosted customer withdrawals, a third of its $1.8 billion in loans were unsecured as of June 30.

Hickey stated, “I think our risk-management process was one of the things that saved us from having any bigger credit events.” In addition, an increasing number of smaller P2P lending platforms are attempting to fill the void left by the departure of larger companies like Voyager and Celsius.

After Three Arrows’ bankruptcy, institutional crypto lenders were more wary, but conditions have since stabilized, and lenders are once more at ease with lending unsecured, according to Sid Powell, co-founder and CEO of the unsecured crypto lending platform Maple.

Market makers’ continued desire for unsecured loans has led to an increase in demand, according to executives at two other peer-to-peer lenders, TrueFi and Atlendis. The CEO of another peer-to-peer platform, Umee, Brent Xu, predicted that the cryptocurrency industry will learn from its mistakes and that lenders would benefit from providing loans to a wider variety of crypto businesses.

He said, rather than concentrating on people making leveraged trades on cryptocurrency prices. As an illustration, that would include companies looking to make acquisitions or fund expansion. In terms of unsecured borrowing and lending, Xu expressed his strong optimism.

Undoubtedly, a lot of crypto loans have security. Even then, though, the collateral typically takes the form of ephemeral tokens that have a short lifespan.

BlockFi’s CEO Zac Prince claimed in a tweet from July that the lender over-collateralized a loan to Three Arrows but still lost $80 million on it. BlockFi claimed that the lending it provided to the hedge fund was backed by a collection of cryptocurrency tokens and stock in a bitcoin trust.

In the same week, 3AC news spread further fear in the market. While we were one of the first to fully accelerate our overcollateralized loan to 3AC, as well as liquidate and hedge all collateral, we did experience ~$80M in losses, which is a fraction of losses reported by others.

According to Daniel Besikof, a partner at Loeb & Loeb who specializes in bankruptcy, “a more traditional lender would certainly require more than full collateral coverage on a loan backed by cryptocurrency, because in any given day the collateral value could swing by 20% or more.” and added that “Lending a million dollars against a million dollars of bitcoin is riskier than lending against more traditional, stable collateral.” 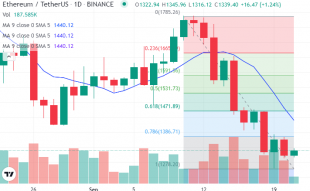