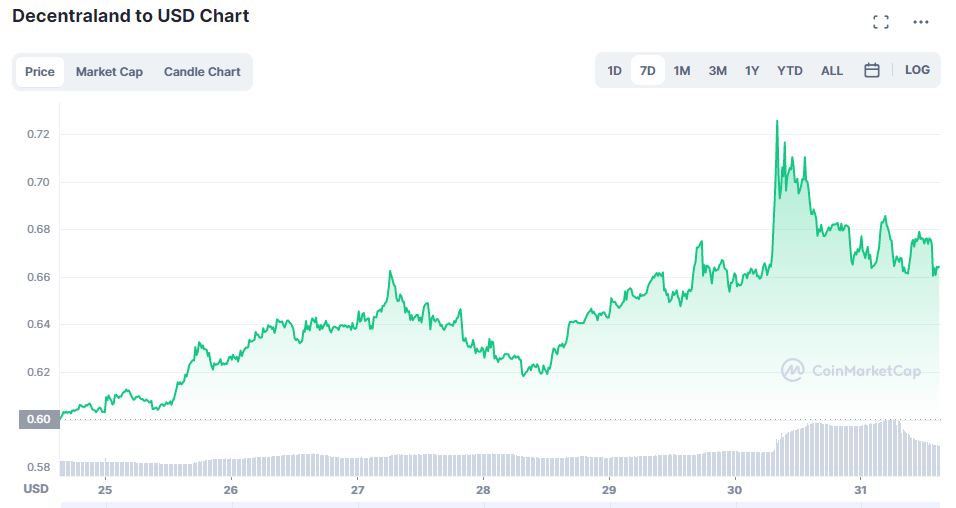 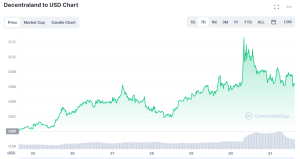 Since MANA’s all-time high of $5.91 in May of 2021, it has been steadily declining inside a parallel downward trend line.

In May of 2022.2, the price of MANA fell below $0.62 before recovering, creating a long lower wick. These wicks are seen as a sign of strong buyer interest. At the time, this was seen as a highly good development since it stopped a potential breach and confirmed the $.75 support area and the channel’s support line.

The framework of Decentraland was built with great care and minimalism on the part of the game’s creators. There are already new initiatives and collaborations in the cryptocurrency market under way to make this alternate reality smarter and more interactive which will likely spread like wildfire and become addictive.

Digital real estate is among the financial prospects to examine because of its potential to contribute to a virtual environment, such as Utopia. Those who put their money into the virtual reality platform economy stand to gain knowledge and exciting new experiences. Art, craft, and technology like music and graphics all coming together in one place can only mean one thing: Decentraland is a highly innovative, potentially lucrative investment opportunity.

From its start, as reported from current news and experts’ input, by observing the price chart at CoinMarketCap, the currency has shown no signs of life and has been stagnant, giving consumers little reason to be optimistic. This asset was uninterested in moving even a millimeter despite all the improvements and changes in blockchain technology.

In December of 2017, when Decentraland was launched, one unit of its cryptocurrency cost about $0.024. Later, it rose and broke beyond the $0.24 threshold, only to be met with resistance. Up to the start of 2022, there weren’t any particularly notable shifts in the Decentraland price, and it remained within the same range of value during much of 2017.

Decentraland’s price increased to roughly $0.80 in December 2020, ushering in the boom period that has been pumping MANA’s popularity. This pattern persisted until April of 2021 when the price of MANA reached a record ATH of $1.56. While this was happening, the MANA proceeded to correct lower, sending the Decentraland price below $0.65.

Towards the end of October, the Decentraland price of MANA coins stabilized around $3.5 before seeing a dramatic increase. The currency kept trading strongly upward after that. The price of Decentraland hit a new all-time high of $5.90 in the month of November of last year. After reaching a new ATH, however, the MANA price had a major fall, bringing the Decentraland price down to roughly $2. Once that happens, you should expect to pay around the $3 range for a Decentraland account again.

How Do Investors Feel About Decentraland?

Is Calvaria a Better Substitute?

The new cryptocurrency gaming project Calvaria has attracted a frenzy of investors over the past week, allowing it to raise over one million dollars in its presale.

The project is now in stage 3 of its presale and is creating a lot of enthusiasm in the cryptocurrency world because of its novel approach to solving two of the most critical problems confronting blockchain gaming.

GameFi seems to have a lot of unrealized promise, but it has not yet managed to attract a consistent user base.

As reported by DappRadar, programs like Decentraland had market valuations of over a billion dollars each, their combined player populations in October amounted to only twenty thousand users.

To win crypto tokens as prizes, participants in the card battle strategy game Duels of Eternity compete against actual people.

The story revolves around three rival factions vying for dominance in the afterlife.

Players will need to utilize their skill, timing, and power-ups to win over their opponents since each side has its own unique qualities and benefits.

The single-player campaign mode in Duels of Eternity sets it apart from other combat card games. Beginning with this mode, players face off against the computer in an effort to amass cards and boosters for use in subsequent multiplayer bouts.

Should You Still Invest in Calvaria’s Presale?

The amount of money spent in Calvaria’s presale, which is currently in its third portion, has increased dramatically during the past week.

The native RIA token, which can be sold on exchanges and utilized in the ecosystem’s governance, is now available for purchase at a price of $0.02 per token.

Before the presale makes a splash in 2022, now is the opportunity to buy this currency for a discounted price that might provide a return of 10x in the long run. 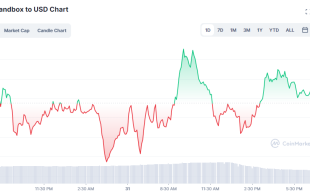 Sandbox Price Prediction: Is It Going To Fall Further?