Celsius, a crypto lending firm that filed for bankruptcy due to ‘extreme market conditions,” have countersued KeyFi and its CEO Jason Stone. Celsius said that KeyFi and Stone misrepresented themselves as experts in decentralized finance (DeFi).

In its lawsuit, Celsius says that Stone, the CEO of the DeFi protocol KeyFi misrepresented himself as an expert in the DeFi sector. The DeFi company further said that Stone and KeyFi had lost Celsius funds through deceit and incompetency.

Celsius claims come weeks after KeyFi sues Celsius for failing to fulfill its obligations under a profit-sharing deal. KeyFi has also extended staking services and DeFi strategy to Celsius. The Celsius suit said the defendants stole millions of dollars worth of funds from Celsius.

Celsius has also said that KeyFi purchased non-fungible tokens (NFTs) using Celsius funds without seeking Celsius’ approval. The NFTs were later transferred to KeyFi wallets before being sold for seven figures. KeyFi pocketed the proceeds of the sale.

Celsius further adds that KeyFi purchased a stake in multiple crypto companies using Celsius coins while using Tornado Cash to hide their activities. Tornado Cash is a crypto mixer tool that the US Treasury recently sanctioned.

Celsius countersuit also says that KeyFi’s activities led the crypto lender to lose “tens of million of dollars.” KeyFi failed to reimburse the funds they used without authorization and made malicious claims against Celsius. Celsius also said Stone’s intentions were to spread false narratives against the company.

KeyFi filed a lawsuit against Celsius shortly before the crypto lender filed for Chapter 11 bankruptcy. The KeyFi lawsuit said that Celsius failed to fulfill what was required under the “handshake agreement.” The agreement required that Celsius share its profits with KeyFi’s staking and DeFi activities.

KeyFi also said that the agreement with Celsius was worth millions of dollars and that the bankrupt crypto lending firm was running a Ponzi scheme. Celsius was among the first crypto firms that shut down services because of the persistent bear market.

Celsius halted withdrawals on June 13. Before halting withdrawals, the crypto lender was declared insolvent and faced liquidity issues. Some users had complained of difficulties making withdrawals, which the Celsius CEO denied for a while before the lending platform later issued a statement that it was shutting down withdrawals because of market conditions. 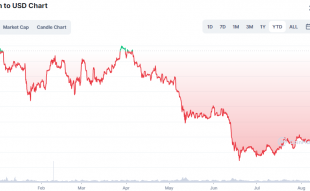 Will Bitcoin Price Reach $30k in September? Time to Buy BTC Along with Tamadoge