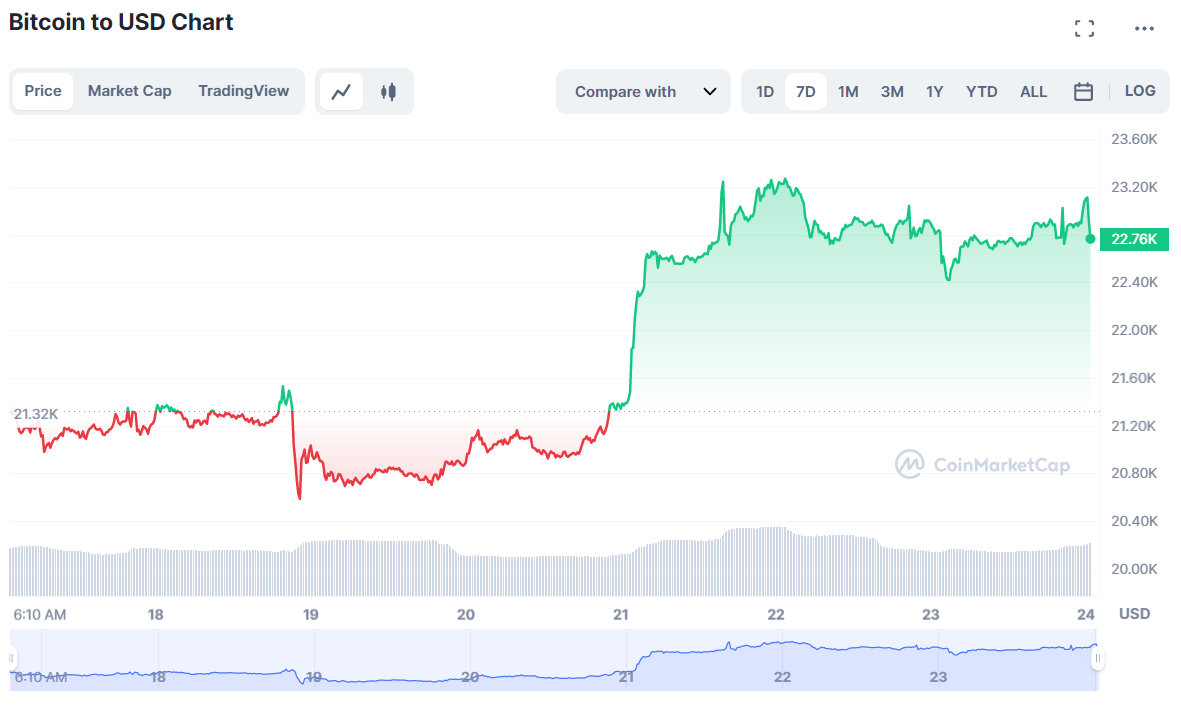 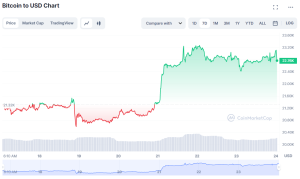 Bitcoin’s price has increased by over 35% since the beginning of the year. Plus, it recently touched the $23k price level, last seen in August 2022. Investors are now curious as to whether the coin will cross this level and continue to rise above.

Bitcoin (BTC) has been experiencing a significant rally in 2023, reaching a new high of $23,000 over the weekend, the first time it has reached this level since August 2022. However, despite this upward trend, market analysts remain divided on the future of the world’s largest cryptocurrency. Some believe that this is a sign of a bullish market while others warn that it could be a trap to catch investors off guard.

Some experts have pointed out that this may only be a temporary surge and is likely what market watchers call a “dead cat bounce” — a brief surge during a bear market, which does not necessarily indicate a change in the downtrend.

For instance, in a blog post on January 19, Arthur Hayes, co-founder of crypto investment firm 100x.VC explained that Bitcoin’s surge may just be because it was already at a low base. He discussed different scenarios that this could lead to, which don’t necessarily mean a resurgence in the sector. Intraday traders and other investors, too, have said that the price surge may be temporary.

Crypto intraday trader, Skew, noted on Twitter that the weekend surge was “driven by Asia bid”, while analyst Toni Ghinea tweeted, “the bigger the pump, the harder BTC will fall down.”

Similarly, trader “il Capo Of Crypto” suggests that the current rally is “the biggest bull trap” he has ever seen. On the other hand, other analysts have a more optimistic view, with popular crypto trader PlanB stating that the bear market is over and the bull market has started.

To be sure, while Bitcoin’s surge may have been a spot of sunshine for the industry, the industry’s concerns are far from over.

On January 20, crypto brokerage Genesis Global Trading (GGT) filed for bankruptcy, adding to the line of large crypto firms that have gone broke recently. GGT is a subsidiary of the global crypto conglomerate Digital Currency Group (DCG). GGT joins large names like FTX, Celsius Network and many other crypto ventures that have had to shutter their stores over the past six-odd months.

While the significant price gain has given a ray of hope, it has coincided with the bankruptcy filing of Crypto lender Genesis, the latest victim of the sector contagion induced by the fall of FTX. This highlights that the crypto industry is still facing challenges and it is important to consider the long-term trend and not just short-term price movements.

When looking at indicators and metrics, there are mixed signals about the range of the Bitcoin rally. The Bitcoin Open Interest and the Estimated Leverage Ratio point towards a longer uptrend, and the price of Bitcoin has also broken above the all-important 200-Day EMA. However, if the price falls below this level, it could potentially retest $19,500.

Is The August High To Be Broken This Week?

It’s important to keep in mind that cryptocurrency is a highly volatile market and predictions can be difficult to make. It’s always a good idea to do your own research and consult multiple sources before making any investment decisions.

Additionally, it’s worth noting that market analysts are divided on the future of Bitcoin, some predict a bullish market while others warn of a trap, so it’s important to stay informed and take caution when investing in Bitcoin.

Bitcoin may very well be the number one cryptocurrency, but it comes with its fair share of disadvantages. Among them, the fact that Bitcoin has a massive market cap limits users from making exponential gains from the token as it is already quite big. However, thanks to the versatility of the crypto market, investors are never out of projects to invest in. Here are a few we recommend:

Meta Masters Guild (MMG) is a new mobile gaming platform that is built entirely on Web3 technology. The platform is designed to provide an enjoyable gaming experience while also being sustainable. MMG’s focus is on mobile games, which are cheaper to produce, more addictive, and have a larger audience of casual gamers.

The company is currently developing three games, Meta Kart Racers, Raid NFT, and Meta Masters World, with Meta Kart Racers, set to launch in late 2023. MEMAG are the native token of the platform but instead of using them for rewards, the ecosystem will use GEMS, an off-chain token for rewards and as a currency across all its games.

MMG is currently in the second stage of its presale, with a hard cap of $1.12 million. Investors can participate in the presale to access the coin at an affordable price of $0.013 and as the coin gains more recognition in the market, demand is expected to rise and drive the coin’s price up.

Next on the list is FightOut, a revolutionary fitness platform that aims to create a strong workout community by combining the concepts of move-to-earn and validated achievement. It has generated significant interest from the crypto community, raising close to $3.3 million in its presale.

The FGHT token, which is the platform’s utility token, is priced at $0.0166 in the first stage of the fundraiser. Experts predict that the FGHT token will be one of the best-performing coins of the year, making it a highly attractive investment option for those seeking new opportunities in the crypto market.

Each card in the game is a unique, non-fungible token (NFT) and the game has additional features such as story mode, a scholarship system, an in-game app and an NFT marketplace. The game offers both free-to-play and play-to-earn options and the presale has raised $2.93 million so far. 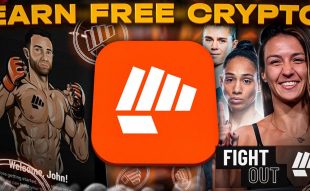