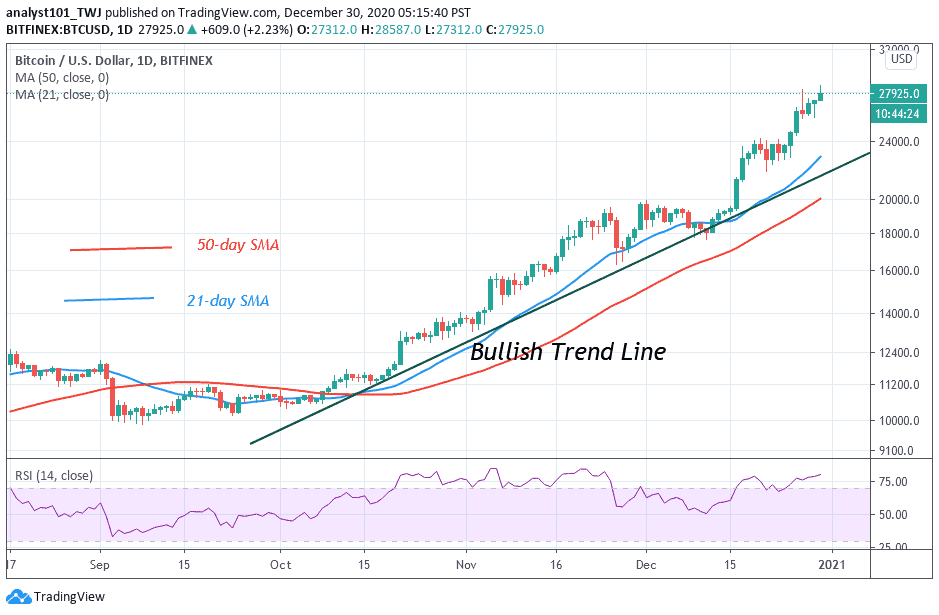 The crypto has fallen to the previous price range of $26,200 and $28,000. Normally, Bitcoin will resume upside momentum after correcting for at least three days. The crypto is fluctuating in the current price range to determine its direction. On the upside, if the bulls break the $28,000 resistance, a rally above $29,000 is likely. Conversely, if sellers break the $26200 support, this can be a reversal that will take the coin to $19,500 low.

Mark Cuban praises BTC monetary Policy after Bitcoin Merch discount promotion
Mark Cuban is a former critic of the digital currency and a billionaire investor and owner of the Dallas Mavericks Mark Cuban. In a tweet on December 23, Cuban announced to his fans that buying Mavericks gear would attract a 25% discount when they used Bitcoin to make their purchase. According to reports, Cuban said that purchasers who buy more than $150 worth of gear using Bitcoin would receive a $25 gift card, and did not mention a 25% discount: People have described Bitcoin’s virtues as a store-of-value and not an event. Nevertheless, Cuban seems to be taking the requisite steps. According to Cuban: “ Bitcoin’s programmatic monetary policy, saying that publicly traded companies would be wise to restrict their share inflation”

Meanwhile, Bitcoin bulls have continued to retest the $28,000 resistance to break it. According to the Fibonacci tool, BTC price is likely to rise on the upside. On December 27uptrend; a retraced candle body tested the 61.8% Fibonacci retracement level. The retracement indicated that the coin will rise and reach level 1.618 Fibonacci extensions. That is the high of $30,803.80.