Homenewsbitcoin and other digital assets are on the rise again 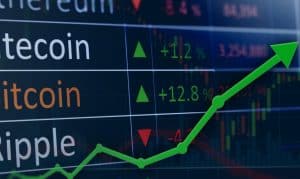 The recent development in the crypto market is the surge in the price of digital coins. Right now, Bitcoin BTC and other assets are on the rise to the joy of traders who buy cryptos. The market capitalization which has been low for the digital assets has risen. It moved up to $176.5 billion from the low levels which it recorded before at $171.33 billion.

Traders are speculating on the reason for the surge in the market. It is true that many positive reports have been flying about in the community about digital assets. However, no one can say for sure what triggered the sudden interest by investors. From what we are seeing, almost all the cryptocurrencies in the market has increased in value since 48 hours ago. It is only a few of them that have not seen changes.

Bitcoin BTC and others rally

BTC and other assets have started to rise again. Two days back, Bitcoin was close to the $5,000 price. From that time until now, the leading asset is still growing. As at yesterday, the cryptocurrency has risen to $5.225.

Moreover, other digital assets are also on the move towards the upside. For instance, the digital coin on the second position Ethereum gained a lot in twenty-four hours following the surge. Let’s recall that yesterday morning being April 16th, the coin was at $162. However, during online trading that same day, ETH rose to $170.

When you consider others amongst the market cap top 20 assets, many of them saw at least a 1% increase in their value. The few that remained at their previous prices were Bitcoin SV, USDT (Tether) and XRP. Also, many of the currencies on the list surged higher than the first and second assets BTC and ETH. For instance, Monero (XMR) and Tezos (XTZ) rose more than the top two. These two rallied by 4.69 percent and 5.68 percent.

Amidst the green markets which are reigning in the crypto community these few days, one of the digital coins has fallen out of favor. Let’s recall that Bitcoin SV has been receiving delisting threats due to the controversial saga about the ownership. Right now, the crypto asset is feeling it big time on the rough side.

Also, we recorded that Binance threatened to honor the delist calls if the owner Wright didn’t stop the legal actions. Well, since the good Doctor refused, the mutiny continued and took another turn. Even, the CEO of Binance joined and teamed up with other cryptocurrency exchanges to stop using BCHSV.

Many exchanges withdrew their support of the controversial asset and this action lead to a division in the community. Many support the delisting; others do not support it. However, due to this action, the price of Bitcoin SV has taken a huge fall. Before Binance delisted it, the crypto asset was trading higher than $70, but after the announcement, the price fell to $55.