Homenewsaxie infinity price gains 42 to 166 where to buy axs

Axie Infinity Token has been a top gainer over the last two days. The uptick in Axie Infinity price was triggered by Facebook’s announcement on October 28 that it was rebranding to Meta affirming the company’s ambitions to go beyond online social media to build a metaverse. The news also triggered a speculative rally cross other NFT and Gaming cryptos in the Metaverse.

AXS has made double-digit gains since then which have made it get closer to the all-time high. AXS is trading at $143 after a 22% gain in 48 hours.

Decentraland (MANA) rallied  by as much as 80% between Thursday and Friday with its market capitalisation rising from $1.44 billion to over $2.08 billion in just 24 hours.

After weeks of being rejected at the $140 resistance level, the metaverse token has been pushing to new heights as it reached highs of around $166 on Friday.

At the time of writing, AXS is trading with a bullish bias around $143. A closure below the $140 psychological level could see the AXS price drop towards the $124 support wall.

A further drop below this level could see the Axie Infinity price drop below the horizontal price range at $107 to tag the 50-day Simple Moving Average (SMA) at $101 or the 100-day SMA at $81.

However, AXS looks bullish right now as it trades in the green. A closure above the $160 supply zone could see the token rise higher to tag new all-time highs.

The upsloping moving averages and as well the movement of the Relative Strength Index (RSI) indicator towards overbought zone indicates that the bulls are currently in the control of the Axie Infinity price, hence adding oomph to the  bullish outlook.

Moreover, the position of the Moving Average Convergence Divergence (MACD) indicator above the positive region points to a positive market sentiment.

Where to Buy AXS

If you want to buy AXS during the current market bull, you can create a cryptocurrency exchange account on eToro. eToro is one of the leading cryptocurrency exchange platforms. It is supportive to new traders because it allows them to copy the trading strategies of expert traders. It also charges low trading fees and commissions. 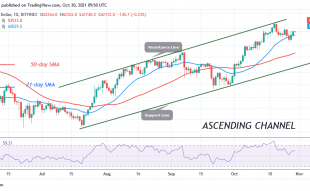