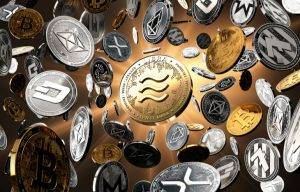 The cryptocurrency market is showing signs of recovery after a difficult few weeks. Its total cap is up by 2.7% in the past 24 hours, reaching $1.37 trillion. This is also a 10% jump since Saturday, with most major coins also rising by similar percentages. However, a few coins have beaten the market by considerable margins. We take a look at them in this list of the 5 best low price cryptocurrency to buy right now. 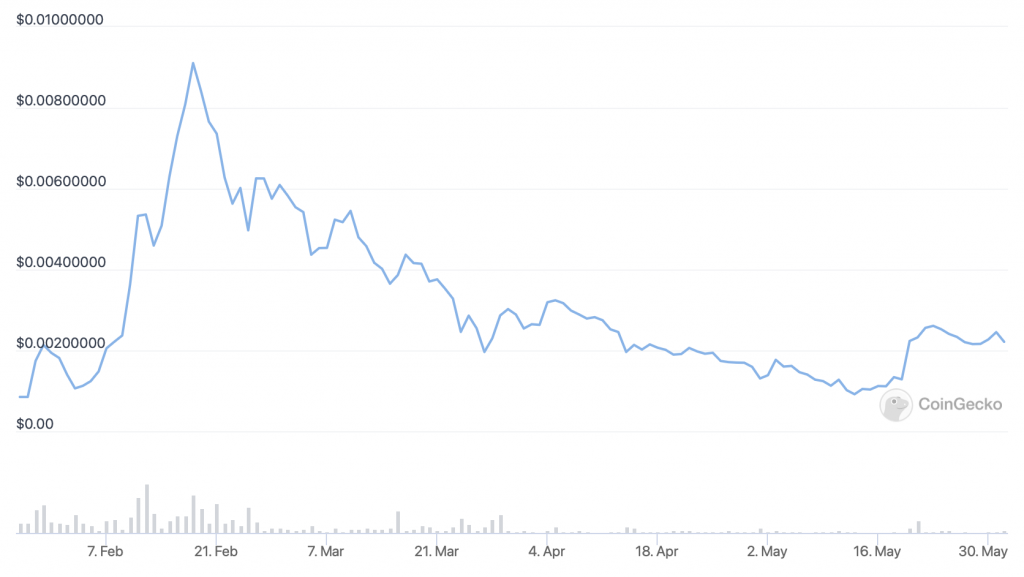 LBLOCK may have dipped in the past day, but it’s due for a spurt anytime soon. In fact, the Lucky Block crypto games platform is due to hold its first ever prize draw today. Scheduled to take place at 8:00pm BST (or 3:00pm EST), its successful completion will surely boost confidence in Lucky Block. And by extension, it will boost confidence in LBLOCK.

Based on Binance Smart Chain, Lucky Block plans to hold regular draws from today onwards. The first draw has a prize fund of $1 million, with ticket holders having the chance to win 70% of this fund. Meanwhile, all holders of LBLOCK will receive an equal share of 10% of the same fund.

This setup has generated considerable interested in LBLOCK, which now has 56,000 holders. That said, this number should increase very soon. On top of this, Lucky Block is planning to launch an Ethereum-based version of its token, while is also on the brink of securing more exchange listings.  Together, such developments will boost the altcoin significantly. This is why it’s one of our 5 best low price cryptocurrency to buy.

On the V2 ERC20 token we are also making good progress. We have started implementing changes to align the contract more closely with CEX requirements. 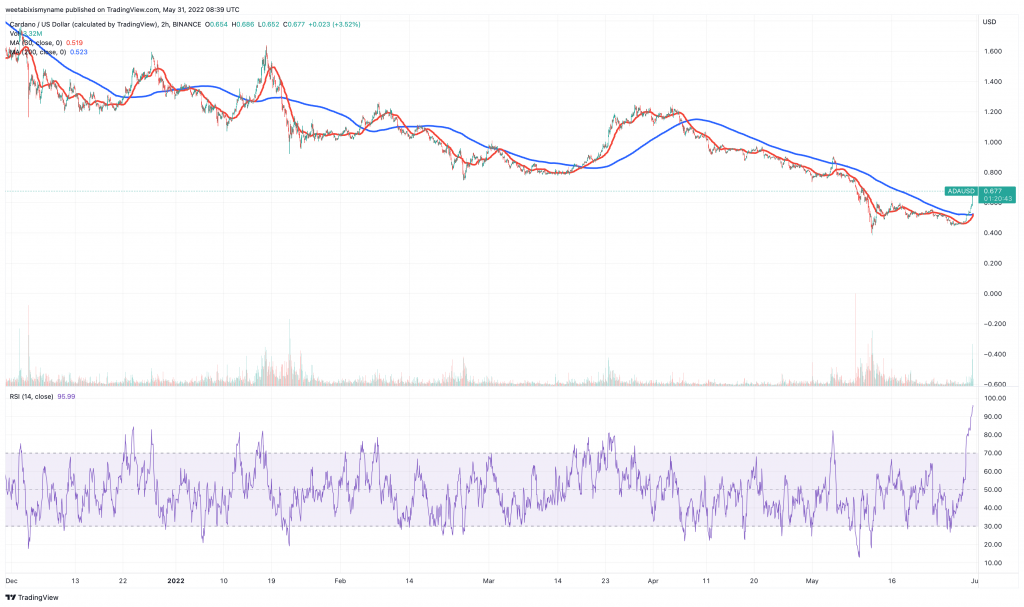 ADA’s chart shows that its indicators have gone through the roof. In particular, its relative strength index (in purple) has passed 95. This signals extremely strong momentum, although bears may caution that it also signals overbuying. That said, ADA’s 30-day moving average (in red) has only just overtaken its 200-day average (in blue). As such, a rally may only have just begun.

Indeed, ADA’s price began rising only yesterday. Even then, its initial rise was relatively modest, with the biggest gains coming early this morning.

There’s no obvious fundamental reason as to why ADA is rallying big right now. On the one hand, the market has undervalued it for a long time, so it’s partly correcting the error of its ways. On the other, a few pieces of positive (if modest) news have coalesced to strengthen the bull case for ADA.

For one, Cardano has recently celebrated an uptick in transaction volumes and usage. It recorded a transaction volume of nearly $10 billion a couple of days ago, while it has now issued just over five million NFTs.

At the same time, faith in some of Cardano’s rivals — in particular Solana — has declined in recent days. Correspondingly, some investors are looking for alternatives, with Cardano being chief among them. 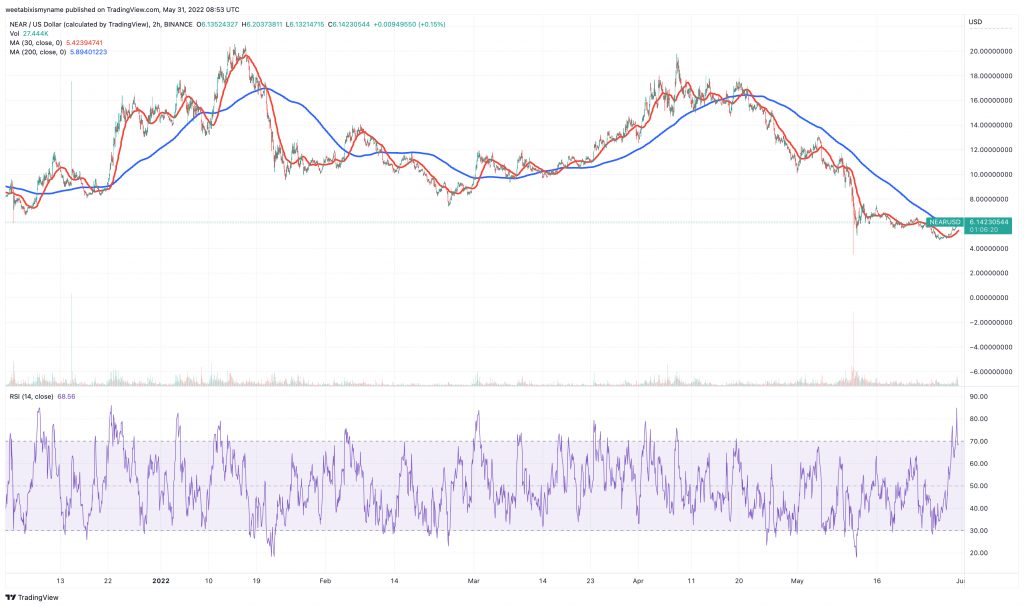 NEAR’s RSI has reached 80 in the past few hours, suggesting strong momentum. There’s no particular short-term catalyst for its rise right now, other than the market showing some renewed signs of life. Having said that, the NEAR Protocol has been growing organically over the past few weeks. It’s therefore likely that demand for NEAR is rising.

For example, the NEAR Protocol’s total value locked in has risen from $228 million at the end of March, to $531 million today. This is a rise of more than 100%, which is impressive given that most other layer-one chains are seeing declines in TVL.

The platform has also celebrated passing 10 million wallets, another sign of organic growth. At the same time, it has benefitted from Terra’s downfall, with several applications moving to its proof-of-stake network. This is why it’s one of our 5 best low price cryptocurrency to buy.

From surpassing 10M #NEAR Wallet accounts to @tamago_stream making headlines on @billboard and welcoming @Official_Tracer to NEAR from Terra, the ecosystem is moving from strength to strength. ?

Here’s everything NEAR that went down in May ⬇️https://t.co/WqtUFek58Y 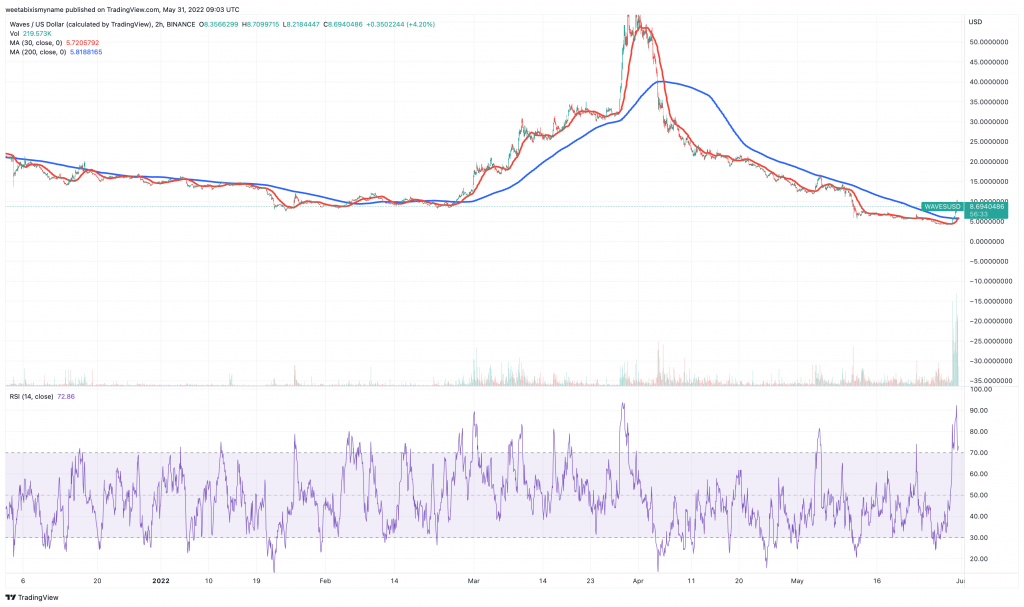 WAVES is making up lost ground today. Its RSI had been subdued for the past couple of months, often dipping below 30. Now, it has surged to 90, and remains above 70. And with the altcoin still 86% below its ATH of $61.30, it has plenty more room to rebound.

In the short term, WAVES appears to have benefitted from a revival plan aimed at stabilising its ecosystem, including aggressive selling of the USDN stablecoin. This plan also includes a measure to liquidate large positions, thereby reducing the power of whales to influence or manipulate its markets.

It is unfair that most users have to suffer due to a few large whales abusing the system. Sasha will liquidate the whale positions and slowly restore liquidity. https://t.co/mMKonJ57r9

More generally, Waves is another proof-of-stake layer-one chain that has capitalised on the difficulties of other networks. Its total value locked in stands $1.13 billion, making it the tenth biggest DeFi platform in the market. 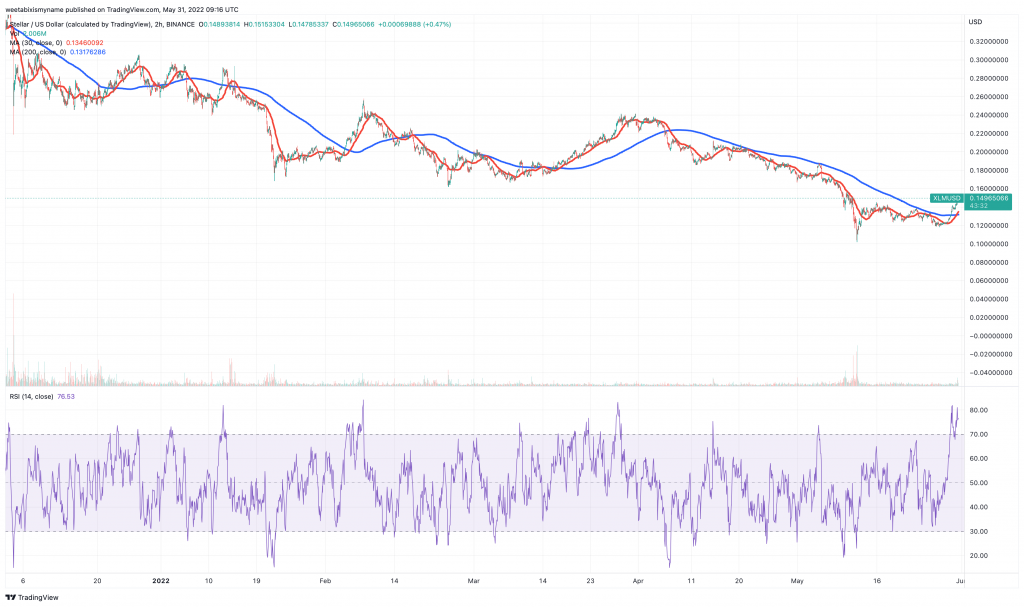 Another layer-one blockchain, Stellar has gained a little more transaction in recent months due to its environmentally friendlier image. It uses neither proof-of-work nor proof-of-stake, and instead has a centralised minting mechanism similar to Ripple’s. It also has a similar focus to Ripple, with one of its main areas being transfers and remittances.

Actually, remittances are why XLM is rallying at the moment. Stellar recently announced that it’s partnering with MoneyGram, with the latter aiming to provide a service where stablecoins can be sent cross-border and converted into fiat.

This is a big win for Stellar, since MoneyGram had been partnered with Ripple. However, the remittance company cut ties with Ripple in 2021. As such, the new partnership suggests that Stellar may benefit if Ripple loses its case with the SEC. This is why it’s one of our 5 best low price cryptocurrency to buy. 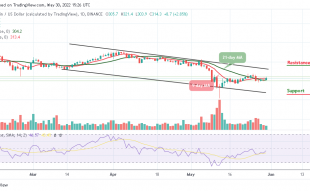