Sang Lee, the co-founder of VegaX Holdings, a cryptocurrency financial service provider, has said that for crypto capital markets to become mainstream among institutional clients, decentralization needs to be seriously considered.

Decentralization is integral for the growth of crypto capital markets

Capital markets bring liquidity providers and borrowers together to promote efficient transactions. Investments and savings are usually transferred between funding institutions such as banks and those institutions that need capital, such as governments and individuals.

In an interview with Cointelegraph, Sang Lee said that financial institutions are yet to catch up with the rapid growth of the cryptocurrency sector. VegaX Holdings was planning to offer crypto-based financial services to target institutional investors.

Lee said that decentralization was an important factor in assisting the cryptocurrency sector in venturing into the capital markets. Decentralization removes the need for intermediaries during transaction processing and decision making.

Lee said that the current centralized nature of the financial system was “atrocious”. “We have evolved far enough to say we don’t need people as intermediaries. It was necessary before but not anymore,” Lee added.

Intermediaries resulted in higher fees and increased the time needed to invest, reducing potential returns. Getting rid of intermediaries through decentralization was needed to boost market efficiency and allow investors to gain high returns.

Lee added that decentralized finance (DeFi) and the entire crypto market needed higher efficiency to boost the adoption rate as technological innovation grows. He added that a lack of efficiency was caused by “unusable” platforms created to assist inexperienced users in bringing their funds into the crypto sector.

“People avoid the best performing asset class in history because there’s no way to get there. If platforms were more usable for the layperson, adoption would be a lot higher than it is now,” he added.

Lee added that stablecoins played an integral role in expanding crypto capital markets. Stablecoins had the potential to surpass other digital assets and fiat currencies in terms of use because they were denominated by strong fiat currencies such as the US dollar.

He added that stablecoins allowed investors to have a single account through which they could transact. Moreover, the stablecoins record increased demand when the market is underperforming.

“In an economy where things become murkier and harder to track, a stablecoin helps even things out,” he added. USDC, the second-largest stablecoin issued by Circle, partnered with BlackRock to begin its venture into capital markets. 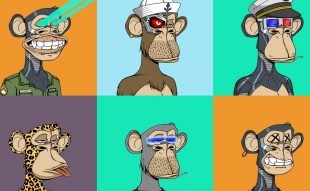 The Bored Ape Yacht Club (BAYC) has revealed the release date for the eagerly ...