Many investors have recognised the crypto sector’s enormous potential in 2022. With so many cryptocurrencies to choose from, we have curated a list of the top altcoins to buy for long term returns.

You may have missed out on Bitcoin when it was going for under $50, but here are a few altcoins to consider investing in for huge gain. 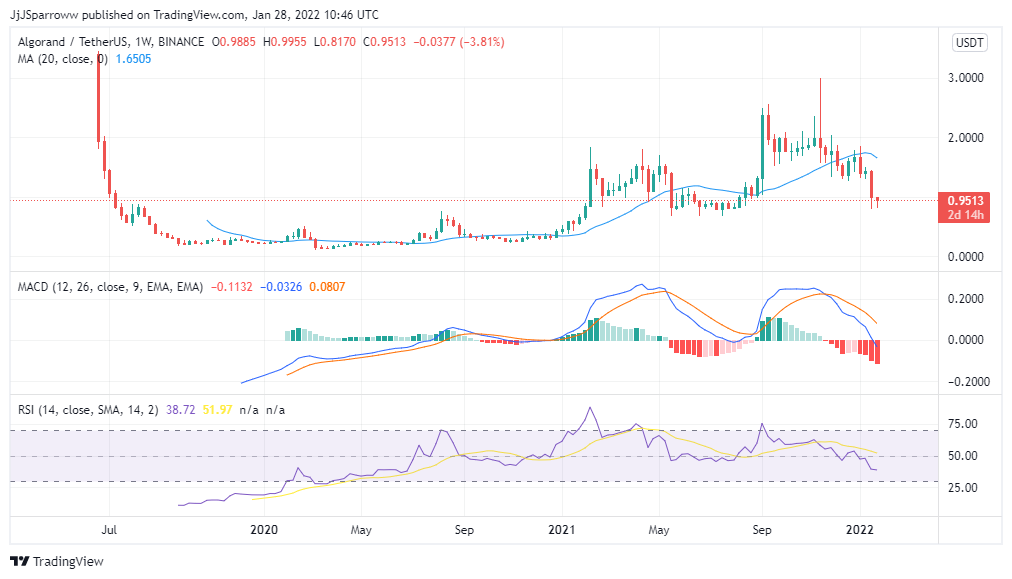 Algorand is an autonomous, decentralised, blockchain-based network that may be used for various purposes. These systems are safe, scalable, and efficient, which are important characteristics for real-world applications.

Although the Ethereum killer is currently in the bearish market, the digital asset is gearing up to run with the bulls, making this the perfect moment for investors to invest in the altcoin.

Grayscale Investments has refreshed its list of potential digital assets for this year. Layer 1 chains, Metaverse apps, and blockchain games are among the 25 new coins added to the list.

The crypto asset management firm added 25 additional tokens to its list of assets under review on Monday. With the additional acquisitions, Grayscale now has a total of 43 assets on its radar. Several alternative Layer 1 blockchain coins, such as Algorand, Elrond, and others, are among the newcomers. 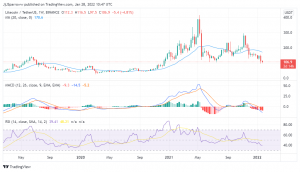 At press time, Litecoin is trading at $106.9, with a 1.09% decline in price in the past 24 hours. The proof-of-work token is trading below the 20-day moving average (MA) support price of $170. This bearish trade reflects the global crypto market following the decline of the premier digital asset.

However, the digital asset has strong long term bullish sentiment as LTC is trading above the 200-day Moving Average support price of $99.5. Investors are optimistic about a price correction due to the digital coin’s fundamentals.

Litecoin recently gained more real-life use cases when WWE wrestling superstar Summer Rae announced that she would be receiving a certain percentage of her pay from the upcoming Royal rumble in LTC.

The superstar made headlines earlier this year when she became the first female professional athlete to be appointed to an executive role within a cryptocurrency-focused company (Cornerstone Global Management, Inc.).

Rae has chosen to receive a portion of her upcoming Royal Rumble pay in Bitcoin and Litecoin via an automated conversion made by Hedge, the same company’s pay conversion platform.

Employees, independent contractors, and others may use Hedge to convert a customisable amount of their pay into cryptocurrency, safely deposit it into their wallets, or leave it on Hedge. 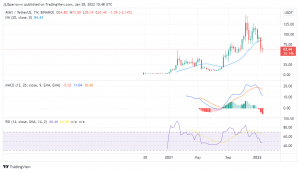 The 12th cryptocurrency in the global crypto market is trading at $63.44 at press time. This price peg is indicative of a 3.10% slump in price in the last day. AVAX is Avalanche’s native token.

It’s a hard-capped, rare asset that’s utilised to pay fees, secure the platform through staking, and serve as a fundamental unit of account amongst Avalanche’s several subnets.

The utility token is currently struggling through bearish sentiments as it trades below the 20-day moving average support price of $84.41. Regardless, this provides an opportunity for investors to buy AVAX at a discount and rise with the market.

This endeavour will democratise stablecoins on the Avalanche network and enhance stablecoin usage and volume. To encourage adoption, the $2 million in AVAX incentives will be paired with two more awards, LUNA and PNG, to form a unique three-token reward Super Farm on Pangolin. 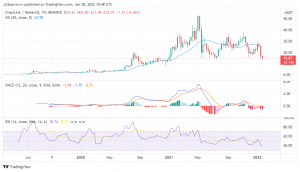 These hits, however, can be attributed to the bearish nature of the global crypto market as several highfliers experienced similar discounts.

Regardless, Chainlink is set to outperform previous records with new fundamentals making LINK one of the best altcoins to buy in 2022.

Catalini and Boneh will collaborate on the Cross-Chain Interoperability Protocol (CCIP), a new worldwide standard for decentralised inter-blockchain communications, data, and token transfers.

Through the usage of the Chainlink Network, users will be able to transport tokens and execute smart contracts across multiple blockchains, allowing for the building of cross-chain apps.

In the same vein, Celsius recently announced that Chainlink Proof of Reserve (PoR) would be integrated into its platform, allowing for developing highly secure and auditable wrapped tokens that enable cross-chain liquidity.

Celsius’ integration will be one of the first live examples of Chainlink PoR being used to audit and safeguard on-chain token minting, redemption, and burning. 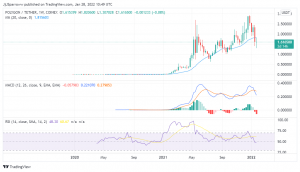 Polygon’s MATIC is trading at $1.615 at press time. This price peg indicates a 0.64% increase in the assets price in the last 24 hours. The digital asset is currently trading below its 20-day MA support price of $1.8.

The digital asset’s relative strength index of 48 places MATIC in the underbought zone. The moving average convergence and divergence indicate a sell signal with the orange line taking the lead.

Investors looking for altcoins to buy for long term returns should consider Polygon. It certainly is beneficial that staking of Polygon’s native MATIC token is now possible on the Bitfinex platform.

Users may stake MATIC by transferring their tokens to qualified wallets in their Bitfinex accounts and earning up to 41.7% per year in incentives. Every week, the prizes are handed out in MATIC.

The startup stated that they chose Polygon because of Polygon’s strategy to scaling Ethereum speeds up transaction processing while drastically lowering gas expenses.

Polygon is the first scaling solution that fully supports the Ethereum Virtual Machine (EVM). It makes it accessible and straightforward to people acquainted with Solidity, an object-oriented programming language for building smart contracts.

Rush hopes to benefit from Ethereum’s network effect while maintaining its rigorous security by building atop the Polygon network.

The cryptocurrency market is flat today after a topsy-turvy week. Its total cap has ...