Toincoin price has been displaying strength over the last month rising above key support levels. At the time of writing, TON price is up 20% over the past week and is currently ranked at position 26 with an overall market value of approximately $2.19 billion, according to data from CoinMarketCap. Although the price of the Layer-1 token is training in the red on Friday, a bullish formation points to a massive lift-off to $2.27.

From the project’s whitepaper, The Open Network (TON), otherwise referred to as TonCoin, is a fast, secure, and scalable blockchain and network project, with the capacity to handle millions of transactions per second if necessary. It is friendly to the user and service provider as well.

The community-led project plans to offer a highly scalable blockchain network capable of processing transactions cheaper and faster compared to other networks in the market today, including Ethereum. Other aspirations for the project include developing the network into an ecosystem capable of providing decentralized storage, an anonymous network, a domain name system (DNS), instant payments, and other services.

TonCoin (TON) is the utility token for this ecosystem, with several use cases including facilitating transactions like staking rewards and network validation. The TonCoin blockchain is based on the proof-of-stake (PoS) protocol, which means validators must stake their tokens for user transaction verification on the network. According to TON, the utility token’s supply cap is five billion, out of which 112 million (2.24%) is held by validators, while the TON Foundation owns 74.9 million (1.5%) of the coins.

According to data on CoinMarketCap, TON had a circulating supply of over 1.2 billion coins and a live market cap of $2.2 billion as of December 2, 2022, positioning the crypto at #26 by those metrics.

TonCoin was launched on August 26, 2021 trading at $0.41 and recorded steady growth during the first few months leading to its largest breakout so far. The crypto climbed to an all-time high of $5.84 on November 12, 2021, after a staking event run by crypto exchange OKX. In this event, up to one million TON tokens were up for sale in its prize pool for anyone staking the OKB token.

Later, TonCoin disclosed that over 4.2 million tokens had been involved in the event, which made ‘TonCoin the most successful cryptocurrency of this amazing program.”

Over 4.2 million $OKB tokens were staked in the @OKEx Jumpstart program, making #Toncoin the most successful cryptocurrency of this amazing program.

Thank you to everyone who participated🙏 pic.twitter.com/0IevvnVBOW

However, following a subsequent peak at $5 on Christmas day of 2021, TON eventually plunged into what became the beginning of the 2022 bear market. All its previous gains have been lost throughout the year. The situation improved for TonCoin in September 2022 when TON started gaining after the Huobi exchange launched a prize pool for TON traders, causing the coin to hit a high of $2.04 on September 7. TonCoin recorded another surge on October 27, 2022, reaching a high of $1.98 after crypto exchange KuCoin listed TON tokens on its trading bot product.

Although the Toncoin price has plummeted slightly since, the token recorded notable gains across November as developers made progress developing the blockchain. Evidence of this growth is the presence of a new decentralized exchange (DEX), christened STON.fi launched on November 19, 2022.

The moment you have all been waiting for has come.https://t.co/FWINlXQ9YN DEX on TON blockchain is working with full functionality! Follow this link to start making swaps and providing liquidity.

Meanwhile, crypto wallet SafePal has announced plans to integrate the TON crypto in the foreseeable future. Once this happens, SafePal wallet users will be able to store TON assets in their hardware and software wallets.

Users of @iSafePal can store future $TON assets in their Hardware and Software wallets.

The news pumped TON to $1.74, 10% higher than the week before and 24% more than the previous month.  At the time of this writing, TON is trading at $1.80 on CoinGecko, up by 1.5% over the past 24 hours, as The Open Network primes for a 27% rally. The trading volume for the coin has increased by 57.0% over the past week, while the overall circulating supply of the coin has decreased by 0.66%.

By the end of November, TON price had increased by 20.52% to approach the $2.11 level with almost all the technical analysis indicators suggesting bullish signals. However, some indicators signaled bearish sentiment, balancing out to a general Neutral sentiment.

With this pattern of price movement, traders should watch for breakouts from the triangle pattern to the upper side.  In the chart (above), the first attempt at a breakout was premature and aborted soon after. However, as the run-up to the x-axis is boosted by ongoing accumulation, a second breakout is likely to occur.

The ascending triangle pattern is also reputed for its reversal tendencies, which points to the possibility of the TON price taking off above the x-axis (resistance at $1.88) and pushing past the $2.0 psychological level. A 26% breakout to the technical target of the governing chart pattern, would bring the TON price close to $2.27, as shown on the chart above.

Moreover, with buying pressure increasing and approaching the overbought region, as revealed by the Relative Strength Index (RSI) at 56, it suggests that the TON price is being primed for a rally. With the Toincoin price sitting above the moving average, the odds are tipping in favor of the bulls.

Traders should follow closely the movement of the MACD (blue line) to affirm the feasibility of the uptrend over the next few days. Increasing volume helps to confirm the breakout, as it shows rising interest as the price moves out of the pattern because of increased buying pressure.

On the downside, the TON price may turn down from the current price to slip below the triangle’s hypotenuse at $1.76. If this happens, the altcoin may drop first toward the $1.5 psychological level, later to the $1.3 swing low. Investors could expect the Toncoin price to take a breather here before kickstarting a recovery.

Other Projects of Interest for Investor Portfolio Diversification

Amid the current market uncertainty, there are other projects besides TonCoin, that will certainly attract the interest of investors. Among them, IMPT and Calvaria, have already demonstrated strong fundamentals and fast-moving investors have already identified the opportunity and jumped in for early profits.

You can join an impactful carbon offset program by investing in the IMPT token, and become a part of a large ecosystem that connects socially responsible brands with businesses and individuals looking to reduce their carbon footprint.

Designed to link with carbon trading, the IMPT project is based on the blockchain and is committed to empowering users to buy, sell, or retire carbon credits while avoiding double counting and fraud. At the core of the project is to fuse non-fungible tokens (NFTs) and carbon credits in a bid to create a greener form of crypto.

You can buy, sell, and retire carbon credits with the IMPT.io platform. The carbon credits are minted into NFTs, which helps prevent fraudulent activities. Meanwhile, the use of the blockchain ensures a stable and transparent ecosystem that addresses environmental challenges most efficiently.

The project is at the second stage of the presale.

LAST STAGE IS LIVE NOW!
The last opportunity to purchase with a huge discount, don't miss out!

The first presale was dealing with IMPT tokens at $0.018 each, but in the presale 2, a single IMPT token is going for $0.023. Hurry and buy before presale 2 sells out because in the next stage of the presale IMPT price will have increased.  Do not miss out for any reason.

Calvaria is a NFT-based play-to-earn (P2E) battle card game set beyond the veil of death. Gamers get to duel, earn and upgrade their cards to become the ultimate force on the battlefield.

Calvaria is powered by the RIA, an ERC-20 token. The pre-sale is already live in its final stage, with a provision to buy $RIA with ETH or stablecoins before the price increase.

There are many reasons why Calvaria is performing so well so early on. It is a fun card game, players truly own all their earnings, and the fact that it offers a chance for new crypto gamers to learn what P2E is all about.

The project is working with some of the biggest names in the industry because they love and share Calvaria’s vision. Join the Calvaria team, and together – only the sky’s the limit! Tokens will be available for claim at launch.

So far, the Calvaria ICO has raised $2,137,661, a stunning achievement given the short amount of time that they have been running. There is very little time left to purchase RIA at such a low price. No one looking for the next great thing in the market should look any further. This play-to-earn crypto card game is an excellent opportunity, with only 31% of tokens left! 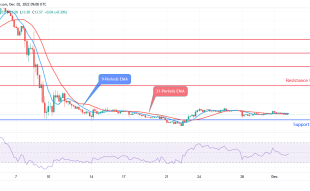