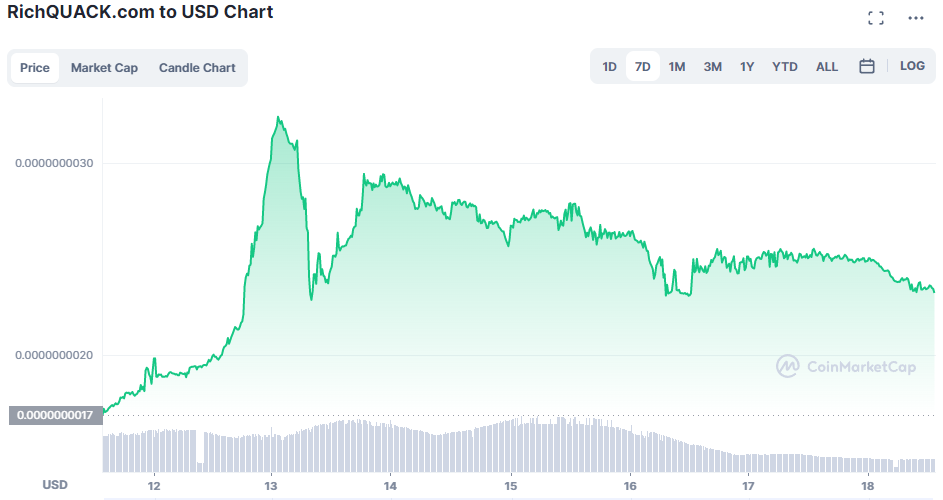 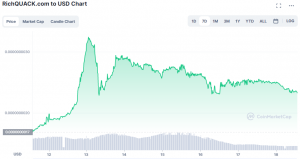 Meme coin RichQuack keeps pumping on the back of enormous social media momentum, making it one of the most acquired tokens throughout the whole cryptocurrency market. The hyper-deflationary token has gained around 9% since yesterday, up by 70% since the past week, spiked over 223% since the past 1 month. QUACK’s incredibly powerful burn mechanism and rewards structure, as well as the coin’s enthusiastic social media community, have lured more and more investors into this project.

Everything You Need To Know about RichQuack

The value RichQuack has increased dramatically over the past 90 days, owing to the efforts of the project’s social media community and the project’s robust underlying foundation.

What make RichQuack different from Dogecoin? While the former was created with the purpose of utility, the latter was just designed solely for the purpose of peer-to-peer money.

RichQuack is appealing not just because it is a cheap meme token with upside potential, but also because it serves as a Launchpad and incubator for other initiatives. Investors who own QUACK empowered to have a say in which initiatives receive funding, may invest in those ventures, and earn a profit from those initiatives.

The hyper-deflationary burn process that rewards holders is the primary reason for its popularity and apart from that, RichQuack promises a Metaverse, play-to-earn games and other lotteries where investors can participate and win by 2023.

In contrast to Shiba Inu, whose holders can burn tokens on their own initiative and DOGE, which has a supply that grows over time, QUACK tokens are destroyed once they are spent as they are sent a burn wallet and holders receive a 12% of the transaction tax.

Each time a transaction is made, 4% of the fund is returned to the holder, 4% is added to the liquidity pool, 2% is allocated to the burn wallets, and the remaining 2% is allocated to the developer and marketing wallet. BurnQuack — a Twitter bot — stated on Sunday that more over half of the original supply of this token has been consumed despite the fact that the initial supply was 100 quadrillion!

Nearly 90 trillion tokens were destroyed last week (estimated to be valued at $215,000), bringing the total number of tokens in circulation down to about 53%, although the same account shows that more than 130,000 people are invested in the project. To prevent coin dumping, RichQuack contains an anti-whale mechanism that prevents any one wallet from holding or dumping more than one percent of the entire supply.

What Factors Caused QUACK To Pump?

As a result of the community’s persistent promotion on social media, a recent surge appears to have occurred making it the most discussed Memecoin on various social media platforms like Reddit and Twitter and since last month.

CoinMarketCap reveals that RichQuack is the site’s second most popular page in the previous week and one of the top 10 most popular pages since last month. The same is validated by CryptoInsights which recently stated that RichQuack has been the most talked about meme token for the past eight weeks — blazing past its immediate competitors Shiba Inu and Dogecoin. In addition, data from

Should You Invest In QUACK Or A Better Alternative Like Tamadoge?

It’s difficult to say whether investing in QUACK is still going to be a lucrative prospect or not. One coin which is surely still worth investing in is TAMA that is frequently discussed on social media and is a popular meme coin among crypto enthusiasts.

Apart from it being a Memecoin, the Tamadoge also has NFT’s and several play-to-earn games. Just last week on OpenSea, it Tamadoge launched their first ever NFT collection and within days, it had raised over 250 ETH making it the most talked-about collection on the platform.

The bundle of 100 rare NFTs now come with a price tag of 5.99ETH. In this game which is inspired from the popular Tamagotchi from the ’90s, players will be able to care for one of 21,100 NFTs and see it develop as they feed it and care for it.

Once the pets reach adulthood, their owners will continue to care for them by feeding, playing with, and training them so that they may compete against other players across the world for the chance to mark their spot as a reigning champ on the leaderboard globally while also earn rewards for the same.

A similar arcade-style minigame called Enter the Tamaverse whose recent screenshots were released was welcomed with a lot of enthusiasm due to their resemblance to classic games like Mario and Sonic.

On October 17 and additional 1,000 rare pets will be available in the market, each of which will have improved statistics.  The details regarding the release of the total of 20,000 common pets will be announced soon.

The TAMA token is deflationary in nature due to the token’s low supply of 2 billion and the pet store’s token burn rate of 5%.  With the help of TAMA tokens earned from Tamadoge games, you can buy virtual goods like virtual snacks, food, and toys to nurture your pets and continue to maintain your spot on the global leaderboard. Investors looking for a more environmentally conscious option can also choose IMPT, one of the greenest cryptocurrencies right now.