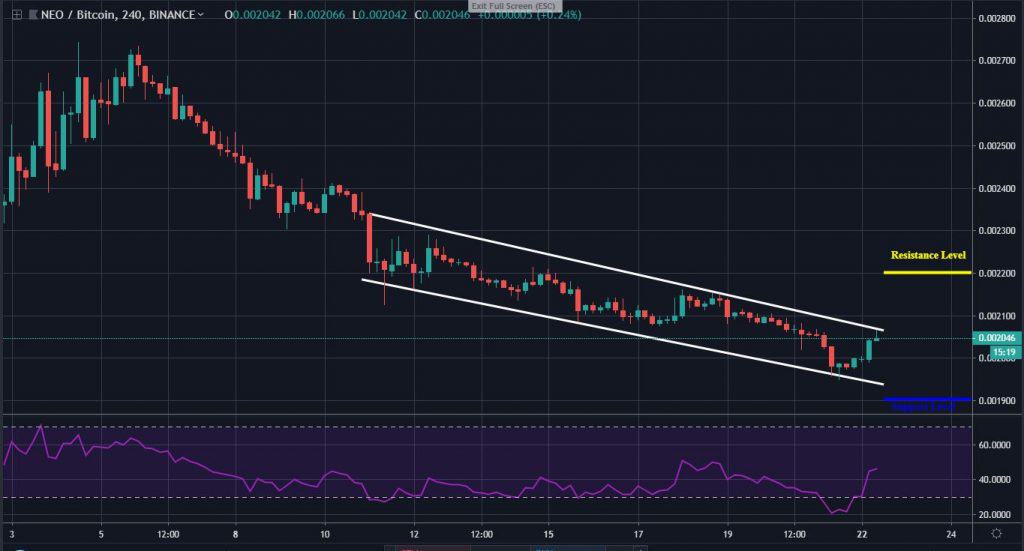 In the last three weeks of selling NEO, the market has been subdued with low volatility as price action remains choppy. The long squeeze is likely to witness a new wave which could turn positive. In case of a negative move, the crypto-asset may slip to potential support below the channel.

With choppy price action, Bitcoin has been positioned in a channel since April 11, following the bearish sentiment earlier this month. Up to this moment, the bears are still gaining control of this pair.

Currently, in a tight range, NEO swings up to hit the upper channel. A bounce low could send the token to $10.3 support level. Above the channel, a bullish surge is likely to meet immediate resistance at $12, $13 and $14 in a subsequent move. By then, the 4-hours RSI should have significantly broken 60 level upward.

Below the channel, however, a bearish surge could possibly provide support at $9.5 and $9 supports respectively which may further position the RSI in the oversold region.

From a medium-term perspective, NEOBTC market has been dramatically subdued with choppy price action. the cryptocurrency exchanges have been maintaining a downtrend since April 6 due to heavy supply force.

Trading in a falling channel for the past twelve days, selling pressure has quite remained within the range of the trend lines. With this long squeeze, a surge in volatility may occur; changing the trend which may possibly be followed by a bullish breakout.

If such a scenario occurs, a spike may hit a possible resistance level at 0.0022 BTC and above. The 4-hours RSI is revealed in an upward direction. Surpassing 51.5 level could confirm a positive move. However, a rejection at the mentioned level could slip price to 0.0019 BTC support.