The market has been flooded with negative news or bearish sentiments for the past couple of months. While a significant correction at proper intervals is considered healthy for any asset, a 75% crash from their previous highs has brought the entire industry on edge.

Now there are speculations of BTC recording more lows, the latest being a long-awaited Mt. Gox refund.

Founded by programmer Jed McCaleb in 2010, mtgox.com was initially a domain name purchased by him in 2007 to build a website for players of a then-popular fantasy-based card game- Magic- The Gathering Online.

The aim was to create a platform for players to trade their game cards with ease as a community, but Jed realized that the project wasn’t worth his time.

However, in 2010, Jed came across a Bitcoin article which piqued his interest. This incited him to create an exchange for trading Bitcoin and other currencies. Thus, his previously purchased domain name mtgox.com went on to become the Mt. Gox Bitcoin exchange.

Within four years of its inception, the exchange became the number one choice for trading in Bitcoin. At its peak, the platform handled more than 70% of the total volume traded in Bitcoin across all exchanges. The Shibuya-based organization had thousands of users lined up daily and had access to some of the biggest early adopters in the blockchain space.

What Happened to Mt. Gox?

The incident was one of the first major hacks the blockchain industry had ever witnessed. In 2014 when Bitcoin was trading at its then-all-time high, Mt. Gox came was hacked, and around 850,000 Bitcoins were stolen.

The stolen BTC was then worth around $460 million. This incident completely shook investors, and Mt. Gox had to quickly announce bankruptcy. There were also allegations with proof that the exchange’s co-founder Mark Karpeles has also laundered around $28 million from the company accounts amidst this fiasco.

The trustee appointed for the rehabilitation of the Mt. Gox exchange users, Nobuaki Kobayashi has been dealing with all legal proceedings ever since the doom of the platform.

While investors had been waiting for several years, there wasn’t much hope until last year, when it was announced that 90% of the Bitcoin tied up in bankruptcy formalities will be credited to users. Moreover, Kobayashi also stated to have recovered 150,000 of the lost Bitcoins and assured that they too will be distributed amongst the affected users.

Investors are to be paid in a lump sum or periodic structure and will have the choice to receive their money in the form of fiat, Bitcoin or Bitcoin Cash. Kobayashi is yet to release more details regarding dates or the exact amount expected to be compensated. Around 99% of affected users have agreed with the compensation plans and have been advised by the organization to simply register their bank account details when needed.

A black swan event in finance simply means an unexpected series of events in the market that are of huge impact or rarity, such as a major crash.

Currently, Mt. Gox is believed to have access to the 150,000 Bitcoins that were retrieved. While the amount back then was comparatively low, the price of Bitcoin since the hack has risen by more than 2000% to date. This means the assets that shall potentially be distributed amongst the investors will be worth around $3 billion. And since the affected investors have waited for several years now, there is a high probability of a major selloff as soon as they have access to their previously lost funds

In an already crippled market condition, such an incident could have a domino effect that could result in a major selloff from retail investors and increased fear or confusion.

A selling pressure of such magnitude may end up in BTC losing value even more, which could contribute to massive dumping in the entire cryptocurrency market. While specifics on the actions from Mt. Gox pertaining to the compensation are still unclear, the possibility of such a scenario cannot be overruled. 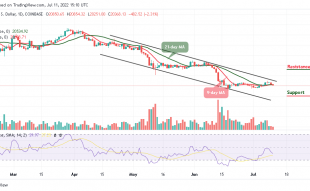 The Bitcoin price prediction indicates that BTC is following a bearish momentum as the ...