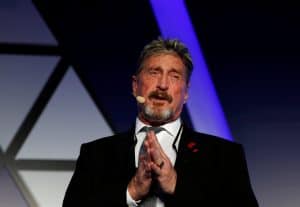 As mentioned, McAfee is already well-known in and out of the tech industry. His antivirus software, which he developed decades ago, still bears his name, even though he is no longer associating himself with his former company. Now, he is launching the second product that is named after him — his cryptocurrency exchanges.

Sorry to be late with my magnum opus trading platform, but I did not anticipate having to mud wrestle the Bahamian Police Commissioner along with dodging assasins this week. But better late than never. Here it is. (Next week the debit cards)https://t.co/boglMOWrCv

The project carries an interesting name, and it promises a magical experience. In reality, this is an access point that provides a combination of a bot and manual online crypto trading across multiple different exchanges via a single interface.

According to the website, the magic part is the ability to quickly trade through bots, which do most of the work on different platforms. Further, the platform also allows for executing shadow trades, which are a way for crypto trading novices to shadow the moves made by the experts. Additionally, there will be no need to deposit funds into traders’ accounts. In a way, the platform acts like a DEX.

The interesting part regarding the platform is that it is quite different than most others. Its protocol allows traders to access eight different exchanges and trade more than 500 digital currencies. The platform also has its own native token, Arbitrage (ARB), which powers it. Further, the website also claims to be operational in all jurisdictions worldwide.

McAfee made the announcement after his latest Twitter tirade, where he claims that he has been fleeing the US government, Bahaman police, and even alleged assassins. However, after announcing the platform, he also promised that crypto debit cards are about to arrive “next week.”

After the announcement, many have tried accessing the platform and checking it out. However, soon enough, the reports of difficulties started to arrive. For example, many found that signing up took a long time and that the servers appear to be slow. After successfully registering, however, there were login issues, and the website crashed several times this Wednesday.

However, when things finally started to calm down, and the users managed to successfully log into the website, they were presented with the dashboard which lets users access trade portal, their wallet, shadow portal, interface settings, and alike. As mentioned, users can trade Bitcoin, as well as over 500 altcoins.

The ARB token, platform’s native cryptocurrency, is an ERC-20 token, made on Ethereum network, so Ethereum trade is likely to be a big part of the platform. Further, users can add multiple exchanges to their dashboard, including Poloniex, Binance, Bittrex, Kraken, and Huobi. The interface appears professional-looking, despite initial issues.

The platform arrives after months of McAfee’s other work on different crypto projects, such as the Bitfi Wallet, his other token, Freedom Coin, and alike. For now, it is too early to say how the platform is going to be accepted and how successful it would become. Many are hoping for additional tricks, which may or may not come as part of the deal. McAfee also revealed that the exchange was attacked by the hackers, which leaves his ability to operate it questionable, at best.