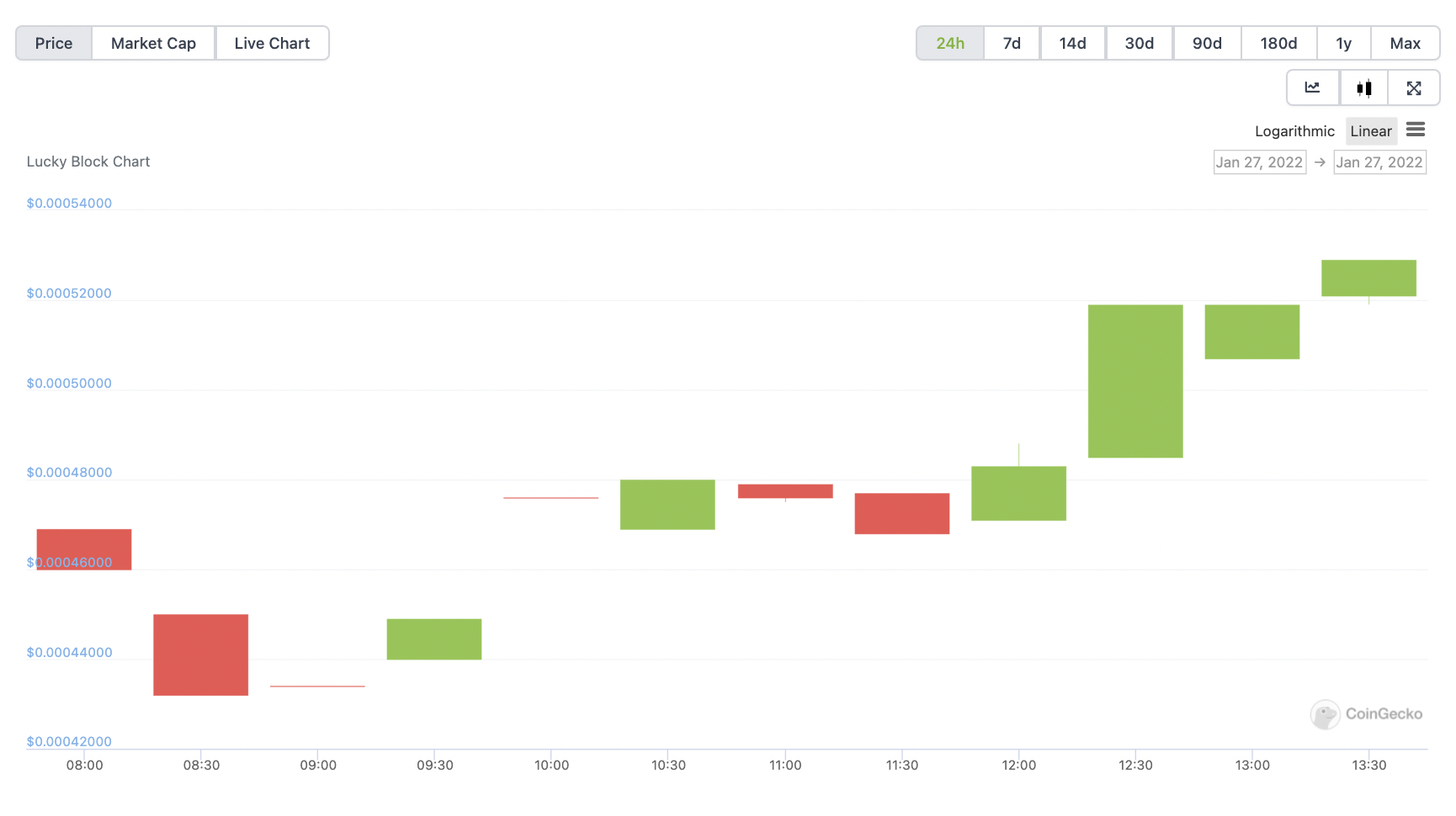 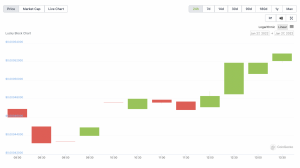 Lucky Block has listed on CoinGecko, less than a day after the innovative lottery coin started trading on PancakeSwap, where the price continues to rise.

The price of the new cryptocurrency has seen many presale buyers register sizeable profits of more than 200%.

CoinGecko at the time of writing shows a price of $0.00049492 (see chart below), far above the presale price points.

Lucky Block’s listing price on PancakeSwap was $0.00021, representing a gain of 133% for buyers on the exchange who were able to grab that price.

Perhaps even more impressive is the fact that the presale and the exchange debut took place against the background of heightened bearish price volatility across the crypto complex.

Yesterday the project also released an update on its product development and marketing plans, which it dubbed The Road to Binance.

The app for the lottery platform is due to drop on 21 March and many holders of the coin see this as a key milestone for the project. If the execution of the launch is anything to go by, the first version of the app should be a slam dunk.

Lucky Block is the first lottery to pay a dividend and its blockchain advantages mean it is totally transparent compared to legacy lotteries, regarding payout liquidity, for example. Also, because it is blockchain-based, those payouts will be instant.

And in a side-swipe at the crypto lottery and gaming world, Lucky Block is one-of-a-kind in that 10% of ticket revenues goes to charities. Token holders will even be able to vote on which charities they want to support, among other things. The project has already donated $5,000 to the British red Cross, with more donations to come.

Darnell McWilliams, Lucky Block head of marketing, speaking to insidebitcoins about the CoinGecko listing, said: “We got on there within 24 hours, which suggests that CoinGecko very much liked what they could see, standing us in good stead for an expedited listing on coinmarketcap – we sent in the application for that last week.

Asked when the LBlock token was likely to make an appearance on a centralised exchange (CEX), McWilliams said: “FTX will probably be the first CEX we list on and, again, our smooth launch means that could be happening very soon, especially now that we are on CoinGecko.”

There are now 9,945 holders of the LBlock token which compares to 8,611 amassed in the presale.

Lucky Block currently has a market cap north of $53 million, a 10-fold jump from its presale valuation (although number of coins in supply needs to be taken into account)

With more exchange listing upcoming and the coinmarketcap listing, more near-term price momentum is to be expected, even with the headwind of selling in the rest of the market.

The project expects to list on Binance sometime in February as its global marketing campaign ramps up.

The Lottery industry is valued at around $333 billion worldwide and just a fraction of that pie could see Lucky Block’s valuation surge. 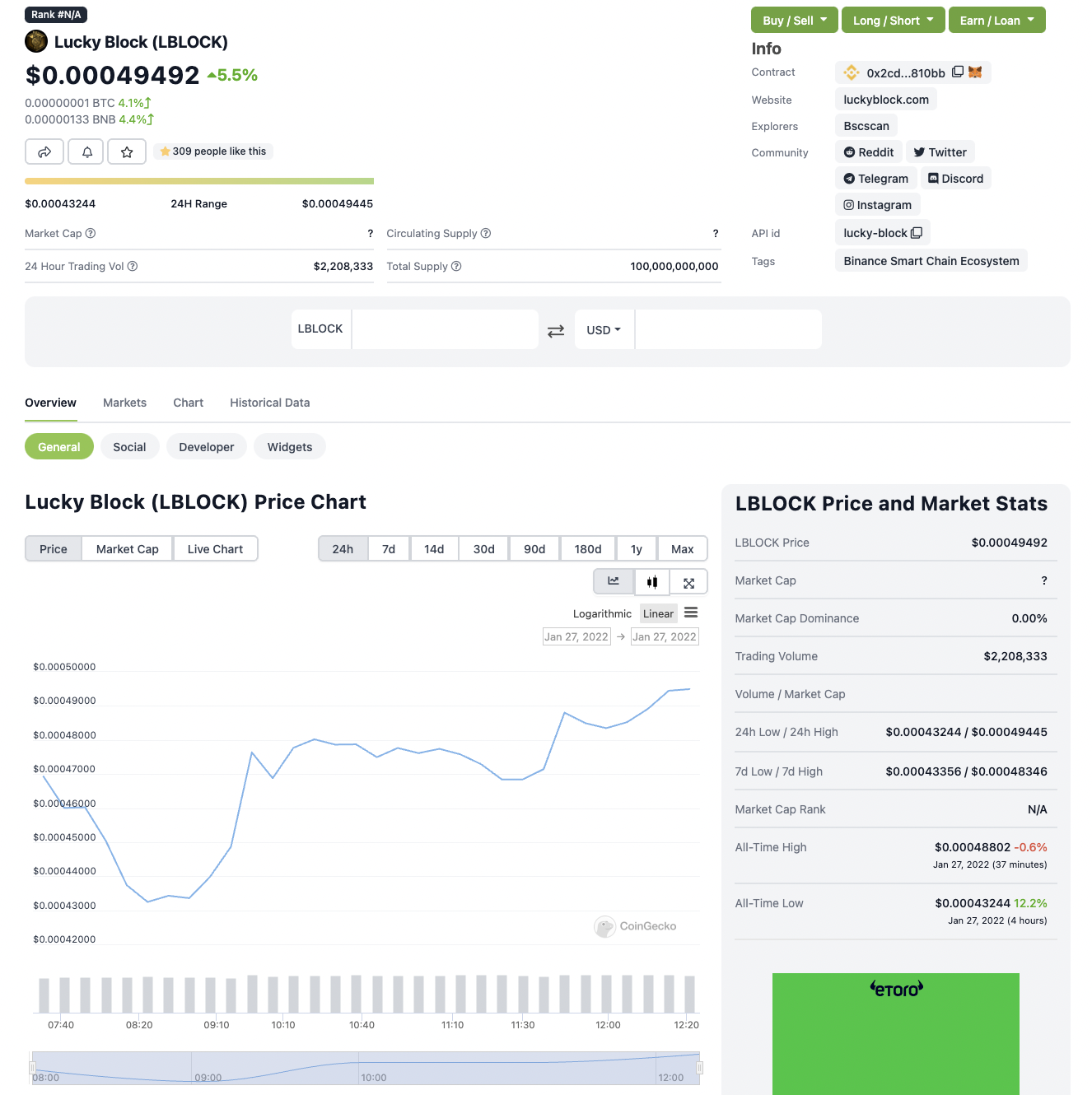 For more information on Lucky Block and to keep up with news, the freshly redesigned website and Telegram channel are your best ports of call. 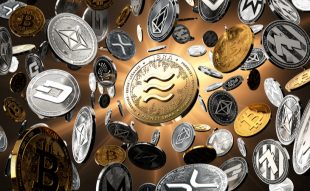 After the crypto market experienced a massive downturn at the start of the week, ...