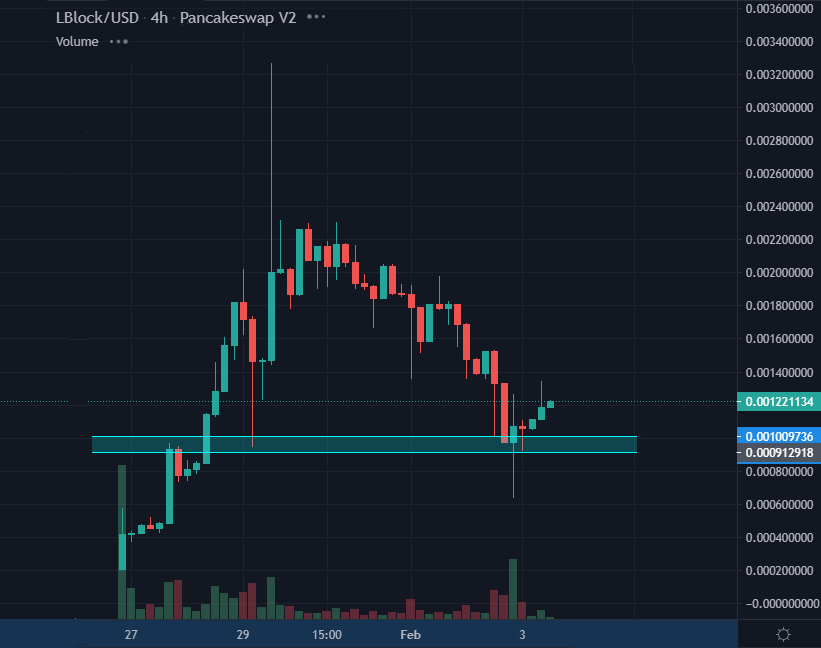 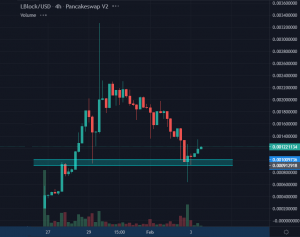 Lucky Block (LBLOCK) has retested the $0.001 support level for a second time and held it, putting in a 20 – 30% bounce for investors who had bids at support. The LBLOCK price is currently trading at over $0.0012.

The $0.001 level previously acted as resistance shortly after LBLOCK, a new coin on Pancakeswap, began trading on Jan 26th, 2022.

It was then briefly tested as support – with a 4 hour candle wicking into that region – before LBLOCK reached its all-time high of over $0.003. Lucky Block has now filled out that wick to the downside – common in crypto markets – and held that support once again.

No 4h candles have closed below the marked support region on the LBLOCK chart and several have now closed above at the time of writing, representing a strong bounce so far – the brief wick below was immediately bought up, showing interest from buyers.

Are Altcoins a Good Investment Now?

Uncertainty in the stock market in Q1 2022 has caused a correlated sell off in Bitcoin, which tends to be magnified in altcoins.

The S&P 500 has corrected to its 200 daily EMA and seen a small bounce, whereas Bitcoin, seen as a more ‘risk on’ asset, is currently below its 200 daily EMA. BTC has been in a three month downtrend since putting in its all-time high of $69,000 in November 2021, rejected again at its diagonal resistance line yesterday.

For those that are long-term bullish on the crypto markets, an over 50% correction in Bitcoin usually represents a ‘buy the dip’ situation that will return a high ROI in the long run. Once the bullish uptrend resumes money tends to trickle down to altcoins.

During ‘altcoin season’ in a bull market, low marketcap projects such as new coins on Pancakeswap tend to rally by the largest percentages. Cryptos that aren’t yet listed on major exchanges can also pump the hardest in anticipation of their listing.

Once the panic in equities resolves – Netflix, Paypal and Facebook have seen large losses – Bitcoin should be able to find a bottom. Some bullish news has been making headlines such as India relaxing its stance on Bitcoin and Russia announcing it owns over $200 billion in Bitcoin.

Long-term investors that build up positions in crypto by dollar cost averaging during times of FUD tend to be rewarded in the long run. The next Bitcoin halving is also taking place in 2024 – the previous halving was followed by the Bitcoin rally from $10,000 to $65,000 shortly after.

Bullish narratives for LBLOCK include its expected listing on KuCoin, Binance and FTX, and the release of the Lucky Block app. View the full roadmap for 2022 on the Lucky Block website.

New coins on Pancakeswap with a low marketcap can easily spike in price in response to news updates – a retest of LBLOCK’s all-time high of over $0.003 would represent an almost 300% gain from its current level.

The largest Lucky Block presale investors are subject to a 12 month smart contract lockup on their tokens, and all holders of over $10k in tokens have theirs locked up for 3 months. Since LBLOCK is just over one week old it shouldn’t face large resistance if it goes back into price discovery above $0.003.