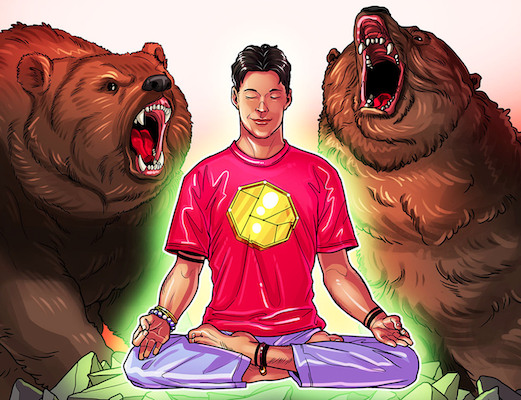 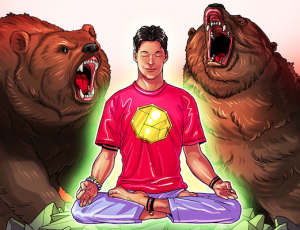 Although the majority of the bear market is already likely behind Bitcoin, it may still see more suffering in the near future.

Philip Swift, a well-known on-chain analyst whose data source, LookIntoBitcoin, analyzes several of the most well-known Bitcoin market indicators, has come to various conclusions, including this one.

Swift, who co-founded trading platform Decentrader with analyst Filbfilb, thinks that despite the present price pressure, Bitcoin will soon break out of its most recent macro downturn. Swift provided new insights into what the data is showing experts and what traders should pay attention to in a new interview with Cointelegraph.

How long will the average hodler need to wait until the tide turns and Bitcoin comes storming back from two-year lows?

You’ve pointed out that some on-chain metrics such as HODL Waves and RHODL Ratio are hinting at a BTC bottom. Could you expand on this? Are you confident that history will repeat this cycle?

Philip Swift (PS): I believe we are now at the point of maximum opportunity for Bitcoin. There are numerous key metrics on LookIntoBitcoin that indicate we are at major cycle lows.

This has the effect of restricting available supply in the market, which can cause price to increase when demand does eventually kick back in. 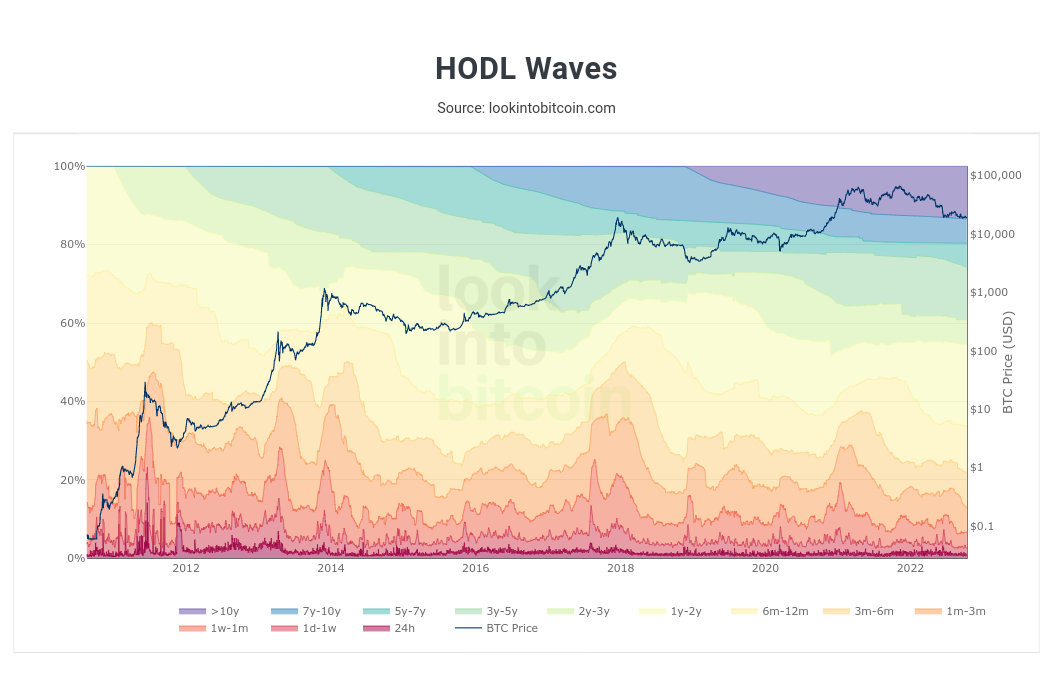 We are also seeing metrics like RHODL Ratio dip into their accumulation zones, which shows the extent to which euphoria has now been drained from the market. This removal of positive sentiment is necessary for a bottom range to form for BTC.

RHODL Ratio is highlighting that the cost basis of recent Bitcoin purchases is significantly lower than prices paid 1–2 years ago when the market was clearly euphoric and expecting +$100k for Bitcoin. So it is able to tell us when the market has reset in preparation for the next cycle to start. 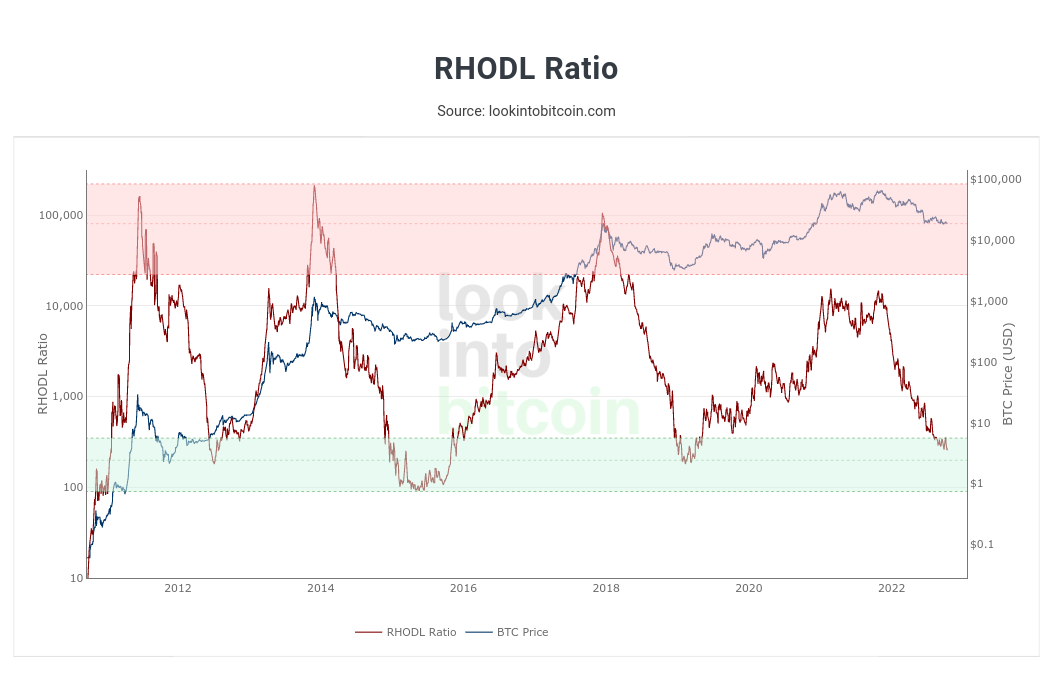 How is this bear market different from previous BTC cycles? Is there any silver lining?

PS: I was around for the 2018/19 bear market and it actually feels pretty similar. All the tourists have left and you just have the committed passionate crypto people remaining in the space. These people will benefit the most in the next bull run — as long as they don’t go crazy trading with leverage.

In terms of silver linings, I have a couple! First, we are actually a fair way through the market cycle, and likely through the majority of this bear market already. The chart below shows Bitcoin performance each cycle since the halvening, and we are already around the capitulation points of the previous two cycles. 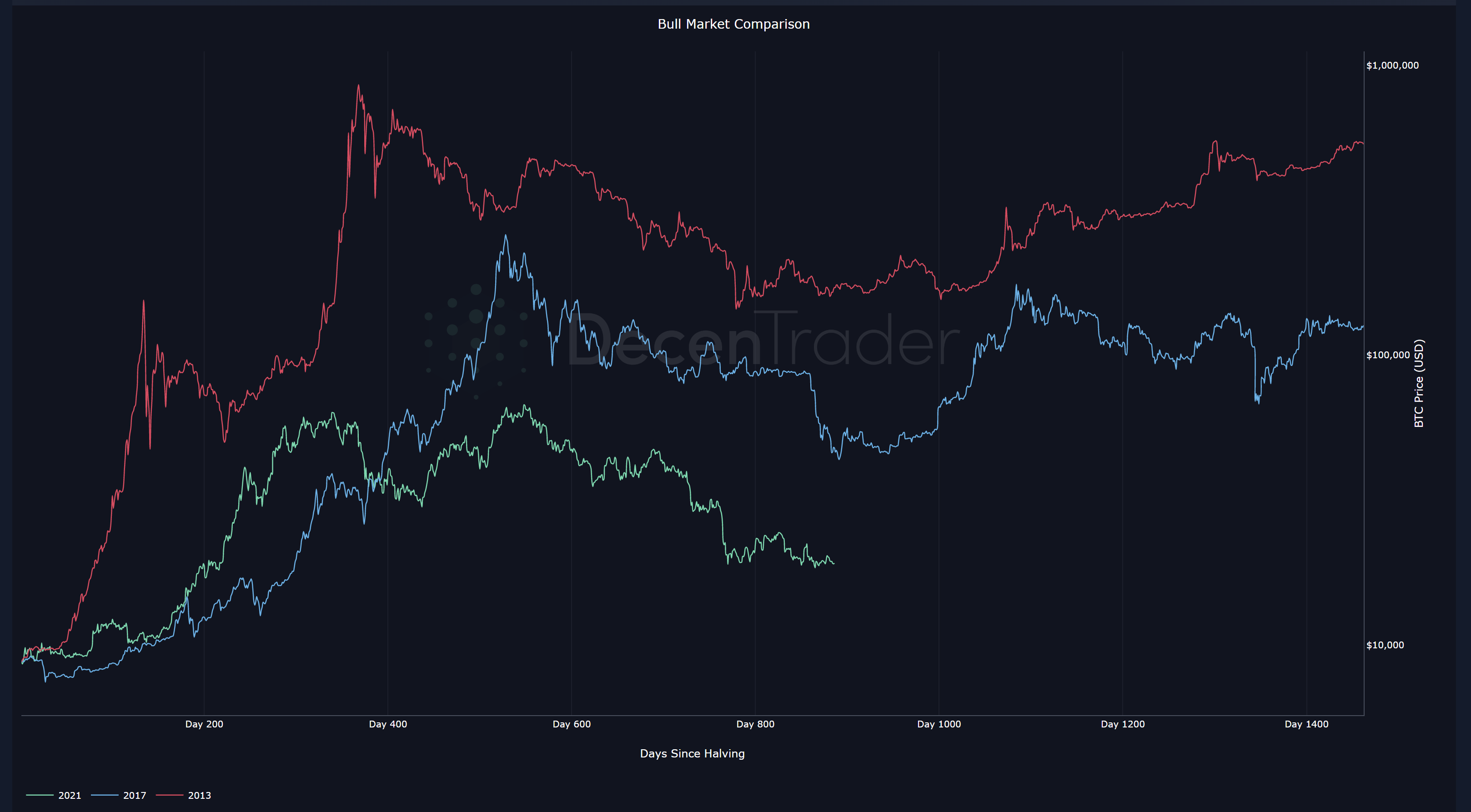 Second, the macro context is very different now. While it has been painful for bulls to see Bitcoin and crypto so heavily correlated to struggling traditional markets, I believe we are soon going to see a bid on Bitcoin as confidence in (major) governments crosses downwards beyond a point of no return.

I believe this lack of confidence in governments and their currencies will create a rush towards private “hard” assets, with Bitcoin being a major beneficiary of that trend in 2023.

What other key on-chain metrics would you also recommend to keep an eye on to spot the bottom?

PS: Be wary of Twitter personalities showing Bitcoin on-chain charts cut by exotic/ weird variables. Such data very rarely adds any genuine value to the story shown by the major key metrics and these personalities just do it as a way to grab attention rather than genuinely trying to help people.

Two metrics that are particularly useful in the current market conditions:

The MVRV Z-Score is an important and widely used metric for Bitcoin. It shows the extremes of Bitcoin price moving above or below its realized price. Realized price is the average cost basis of all Bitcoin purchased. So it can be thought of as an approximate break-even level for the market. Price only ever dips below that level in extreme bear market conditions.

When it does, the indicator on this chart dips into the green “accumulation” zone. We are currently in that zone, which suggests that these may be very good levels for the strategic long-term investor to accumulate more Bitcoin. 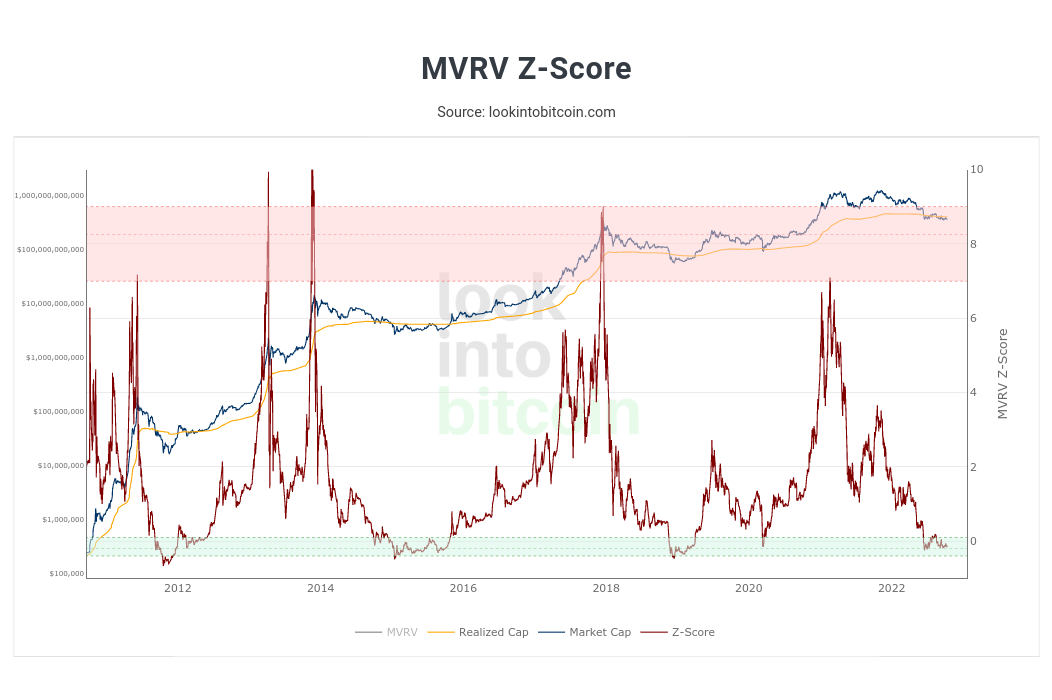 The Puell Multiple Looks at miner revenues versus their historical norms. When the indicator dips into the green accumulation band, like it is now, it shows many miners are under significant stress. This often occurs at major cycle lows for Bitcoin. This indicator suggests we are close to a major cycle low for Bitcoin if we have not already bottomed. 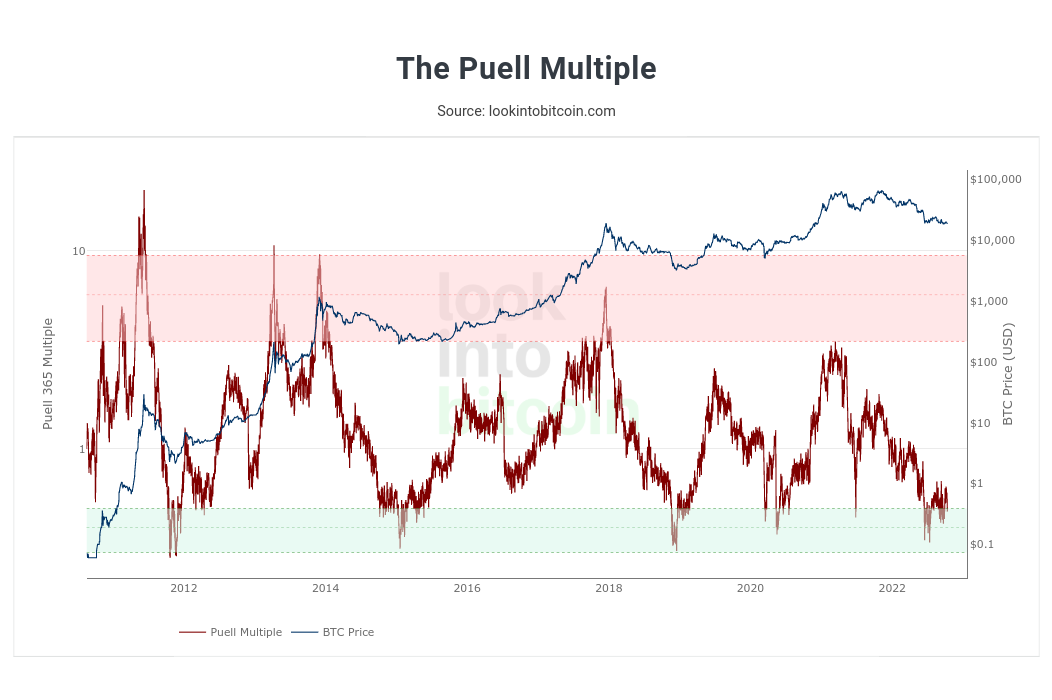 Your fellow analyst Filbfilb expects BTC to reverse course in Q1 2023. Do you agree?

PS: Yes, I do. I think traditional markets probably have a bit more downturn going into early 2023. At worst, I see crypto having a tough time until then, so probably another 2–3 months max. But I think the majority of fear will soon switch toward governments and their currencies — rightly so. Therefore I do expect private assets like Bitcoin to outperform in 2023 and surprise many of the doomers who are saying Bitcoin has failed and is going to zero.

October is a historically bad month for stocks — not so much for Bitcoin. How long do you expect BTC to be in lockstep with risk-on assets and what will be the catalyst?

PS: Bitcoin has been a useful forward-looking risk indicator for the markets throughout much of 2022. What will change in 2023 is that market participants will appreciate [that] most of the risk in fact lies with governments, not with traditionally defined “risk” assets. As a result, I expect a narrative shift that will benefit Bitcoin next year.

The actions of the United Kingdom’s government around their mini-budget two weeks ago were a key turning point for that potential narrative shift. Markets showed they were prepared to show their disapproval of poor policy and incompetence. I expect that trend to accelerate not only for the U.K. but in other countries also.

Are you surprised at Ethereum’s poor performance post-Merge? Are you bullish on ETH longer term with its supply-burning mechanisms?

PS: ETH had a strong short-term narrative with the Merge, but it was within the context of a global bear market. So it is not surprising that its price performance has been lackluster. Ultimately, the overall market conditions dominated, which was to be expected.

Long term, though, Ethereum is set up to do exceptionally well. It is a critical component of Web3, which is growing exponentially. So I am very bullish on Ethereum over the next couple of years.

What is the best jurisdiction for a Bitcoin/ crypto trader today?

PS: Somewhere that is low-tax and crypto-friendly. I personally think Singapore is great and there is a growing crypto scene here, which is good fun too. I have friends who are in Bali, which also sounds great and is more affordable.

PS: Resist any temptation to quit crypto near the bottom of the bear market. Just be patient and use some good tools to help manage your emotions. 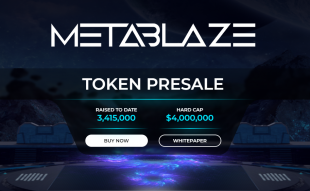