GMX, the token that powers the Decentralized Exchange (DEX) GMX that goes by the same name, saw its upside momentum fade on Thursday amid broader profit-taking across cryptocurrency markets. GMX was last changing hands in the $49s per token, having been nearly as high as $54 earlier in the day. After bouncing from its 21-Day Moving Average earlier this week, GMX saw an impressive more than 18% rebound on Wednesday and price predictions have been becoming more bullish.

Wednesday’s rebound was partly driven by a broader upwards move across cryptocurrency markets, as the sector benefitted from a positive macro mood on dovish rhetoric from the chairman of the Federal Reserve, who signaled a deceleration in the pace of rate hikes at this month’s policy announcement. But most of the upside was driven by optimism about GMX’s future as a dominant player in the Decentralized Finance (DeFi) space.

According to a tweet by cryptocurrency research house Delphi Digital earlier this week, GMX recently surpassed Uniswap, long seen as the dominant DEX, in daily fees. On 28 November, GMX made $1.158 million versus Uniswap’s $1.061 million revenue.

Ranked by fees generated over the last 7 days, GMX comes in fourth place with $3.6 million in fees, behind Uniswap with $6.4 million, Lido Finance with $6.3 million and OpenSea with $5.5 million, according to Token Terminal data. That ranks GMX ahead of the likes of its much better-known DEX rivals such as dYdX and AAVE.

GMX, which runs on Ethereum layer-2 scaling solution Arbitrum and also on Avalanche, is a perpetuals crypto futures-focused DEX. The platform offers its users attractively low trading fees, as well as a feature that prevents trades from having an impact on the market price.

Perpetuals trading in the crypto space has up until recently been dominated by the likes of Binance and FTX. FTX’s abrupt collapse early last month hurt the GMX token badly at the time. GMX/USD slipped as low as the $25s. So its recent rally means it has recovered in the region of 100% in a few weeks.

That could be because some investors are betting that the FTX collapse will trigger a shift in perpetuals trading towards DEXs – a shift that GMX could be a key beneficiary of. Indeed, GMX may already be benefitting from the collapse of FTX, if the latest surge in fees is anything to go by.

The GMX token offers a unique feature to its holders that Uniswap’s UNI token doesn’t. 30% of all of GMX’s trading fees are redistributed to the holders of its tokens. In a way then, GMX can almost be valued in a similar way to a traditional stock – i.e. as a sum of all expected and discounted future cash flows. In that sense, it makes sense that as GMX fees go up, the price of GMX has also gone up.

If its fees keep going up, which could well be possible if the platform continues to attract increased interest/demand following FTX’s implosion, GMX looks likely to test its record highs in the $60 area.

Those interested in investing in a promising crypto trading platform start-up should look no further than Dash 2 Trade. The up-and-coming analytics and social trading platform hopes to take the crypto trading space by storm with its host of unique features. These include trading signals, social sentiment and on-chain indicators, a pre-sale token scoring system, a token listing alert system and a strategy back-testing tool.

Dash 2 Trade’s ecosystem will be powered by the D2T token, which users will need to buy and hold in order to access the platform’s features. Dash 2 Trade is currently conducting a token pre-sale at highly discounted rates. D2T token sales recently surpassed $7.65 million and the sale will soon enter its fourth phase, which will see the token pre-sale price lifted to $0.0533 from $0.0513. 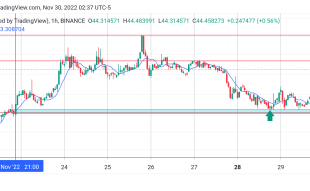