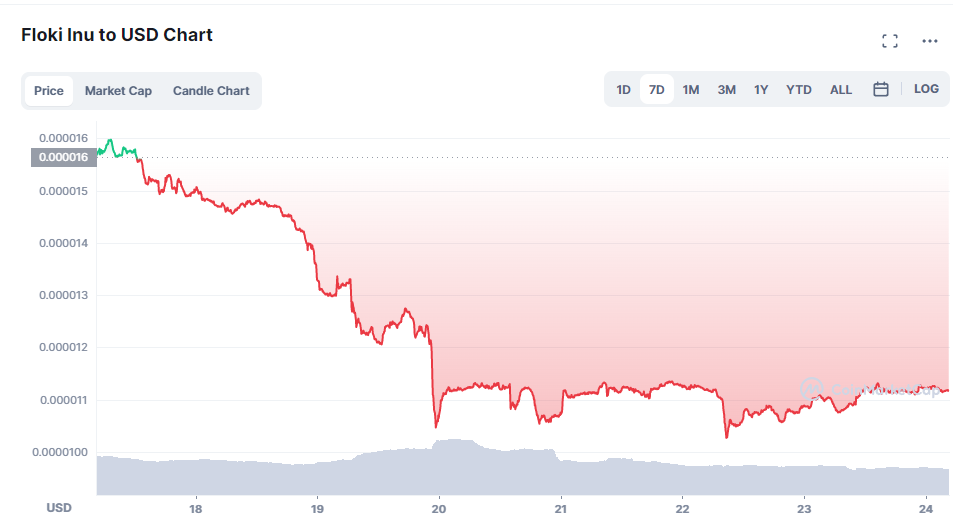 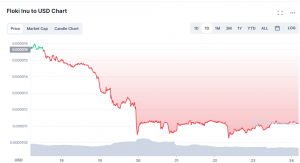 Floki Inu was launched in 2021 as a meme coin, amidst much fanfare. However, the recent coin recently experienced price fluctuations of up to 7%. Is Tamadoge a better option? Find out here.

Following the footsteps of its popular predecessor Shiba Inu, Floki Inu launched in 2019 amidst much fanfare and a “movement, not a meme” approach. With a lifetime supply of 10 trillion, Floki Inu closely follows the practice of various meme coins.

However, in recent days and since its launch it has shed a major chunk of its value after its launch, after gaining an all-time high in November.

The recent turn of events has led to the meme coin losing up to 35% of its value in less than a week, with questions arising about its long-term future. Let us understand the complete scenario.

In the past week alone, Floki Inu has suffered some massive price crashes. However, as of writing the cryptocurrency did show some recovery with prices at $0.00001113.

Floki Inu started off as a typical cryptocurrency with a high supply volume and low market cap. The market cap for Floki stood at $103 million at the time of writing. Although, a larger supply usually leads to a lower value due to lesser scarcity.

Furthermore, in the recent few months, the overall popularity and investor confidence can presume to be decreasing, as the numbers might depict. While the cryptocurrency is making some improvements, such as the most recent one with Coinlink, it is yet to be reflected in its price.

With Floki Inu’s dismal performance in the crypto market in the past few weeks, the spotlight is now on Tamadoge.

Unlike other meme coins, Tamadoge has quite a limited token supply, to keep the tokenomics of the cryptocurrency intact. With a strict cap of 2 billion coins, it gives a notable chance to make some gains, which is a little difficult when it comes to other meme coins.

What makes Tamadoge stand out is the fact that instead of capitalising on popularity, and hype, it gives its investors a real intrinsic value. At its core, Tamadoge is an NFT-based play-to-earn Metaverse game. With in-game applications like buying, selling and raising one’s own pets gives investors a chance to have an interactive experience.

On the utility front, Tamadoge’s Tamapets are tokenized in the form of an NFT, and level up as the players raise their pets. As the player raises their pets, they rise on the leaderboard. Hence, the higher the player is ranked, the more reward they get from the pool.

What keeps the overall supply in check is the fact that the players can buy stuff from the Tamadoge store and are incentivized for the same, further facilitating the TAMA burn mechanism.

A Record-Breaking Presale for Tamadoge

Tamadoge has been quite successful in combining popularity with real-world utility. Entering the play-to-earn space, the project has raised a record-breaking presale amount of $7 million.

There were speculations about Tamadoge having an edge over others, due to its real-world utility which fills the gap between real-world utility and non-utility coins. With every stage of the presale, the price of the coin increases.

At the current stage of the Tamadoge presale, it sits at 50 TAMA tokens for 1 USDT.

Furthermore, the Tamadoge is also hosting an exclusive AMA session for its investors and enthusiasts on 25th August 2022. Learn more about it here.

Is Floki a Good Investment?

Floki Inu’s launch came with its rather rigorous and aggressive marketing campaigns, touting it to be better than its competitors such as Shiba Inu and Dogecoin.

Although, since the marketing practices have fizzled out, the large-scale impact of Floki is yet to be seen. The real-world utilities and applications such as in metaverse games and NFTs, as listed in its whitepaper haven’t been materialized yet.

Hence, terming Floki Inu to be a good investment at this point in time wouldn’t be fair and based on real-world data.