What happens in Asia often has a knock-on effect on trading in Europe and the US later in the day. A grim picture has been painted today as all cryptos, bar one or two, are in the red and falling. Police and tax inspections on exchanges across South Korea could be the cause alongside misreporting by the mainstream media of an outright crypto ban.

Reports are emerging of nation-wide police inspections on crypto exchanges in the Southeast Asian nation. The alleged reason is tax evasion, although there could be wider implications, such as a general desire to regulate and inhibit crypto trading from the government.

Contrary to some reports, South Korea has NOT banned trading; the government is just seeking to prevent the use of anonymous trading accounts and encourage a little more transparency from the exchanges.

Meanwhile, Litecoin creator, Charlie Lee drew parallels to the usual rumors of a looming ban on everything from mining to trading in China.

Earlier in the week, some of the top exchanges had a visit from tax inspectors. Coinone, the ninth largest crypto exchange with just under a billion dollars in daily volume, was one of the targets. Staff at the exchange told reporters:

A few officials from the National Tax Service raided our office this week. Local police also have been investigating our company since last year, they think what we do is gambling.

The second largest exchange in the world, Bithumb, was also raided this week, and staff there said:

We were asked by the tax officials to disclose paperwork and things yesterday.

According to reports, South Korean officials were also targeting banks that offer cryptocurrency accounts, citing a rise in crime as their reasoning. The government is pulling out all the stops to calm the frantic hunger for digital currency in South Korea, which is responsible for at least 20% of global trade. Markets were in the red across the board during the Asian trading session this morning. Bitcoin has continued its downward slide and has lost 24% in four days, falling from $17,700 to $13,500, according to Coinmarketcap.  Ethereum has followed suit despite being one of the strongest crypto currencies in recent days. It has fallen from an all-time high of just over $1,400 yesterday to $1,140 today, a drop of 16% in 24 hours.

Other altcoins are also slumping this morning with Ripple’s XRP taking the biggest hit, sliding over 50% in a week from a high of $3.84 to $1.60 today. The analytics website’s decision to remove South Korean exchanges from its price and volume figures has added to the sentiment. After a brief awakening and a short rally to $320 on January 6th, Litecoin has also fallen back by 28% to $230 at the time of writing.

It remains to be seen whether this mass selloff is a direct result of raids in South Korea. For those hodling, nerves will be fraying, and for those buying, everything is on sale again.

Are you buying or selling? Share your views on the current market conditions in the comments below. 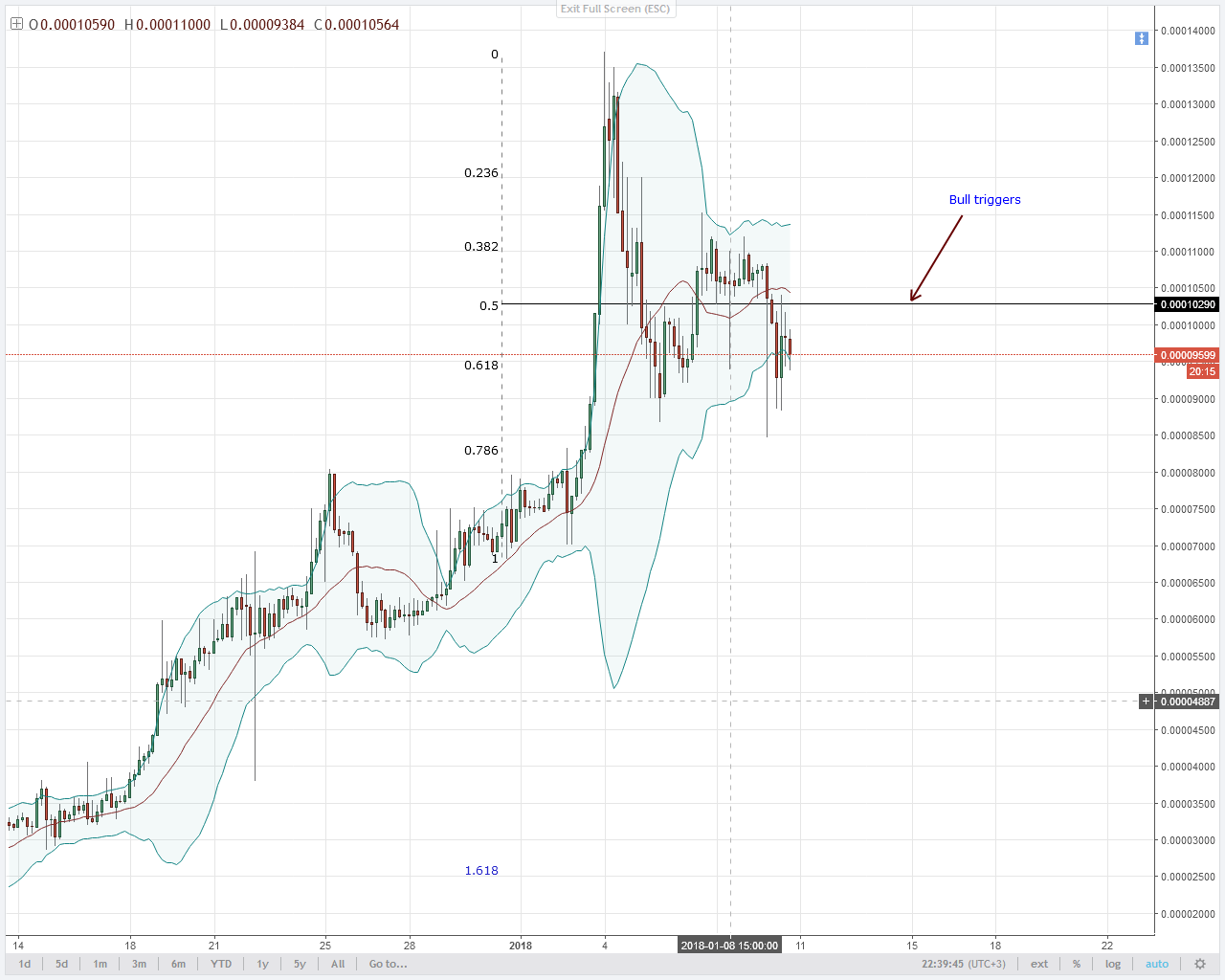 Like LTC, IOTA’s short term trend depends on if prices will close above the ...