Homenewsethereum nearing 1000 when to buy the dip

Ethereum is no longer retaining the above 2k position that it once coveted. The recent crypto crash has hit the token hard, and it has dumped over 40% over the last week. Now that the previous rumors of ETH diving below $1,000 are about to be true – people are wondering whether now is the time to buy the dip.

Ethereum is a 2015-launched blockchain protocol designed to enable peer-to-peer transactions without getting intermediaries such as the banks involved. It allows users to transfer digital funds and create smart contract agreements.

Smart contracts are akin to programming scripts that can’t be altered. When a particular transaction completes, a smart contract executes. The ideation of smart contracts has given rise to more use cases for blockchain within real-state and legal industries.

It was 4th April when Ethereum started to hint that it had entered the red zone. While the wicks weren’t long, investors were nervous. The massive drop-off that happened the day after, when the red showed -3.20%, was when the investors started to think that the ETH’s golden days might be nearing the end.

However, it wasn’t until the massive red the next day that ended at 7% that the investors truly started to worry as the token started hovering over $3k levels.

The event then put the token towards a bottoming trajectory that it has continued to follow to this day. While there were green zones during it, they weren’t as nearly enough or nearly as powerful as the red zones. And when investors saw one bearish engulfing pattern after another, they realized that it was time to look for alternatives.

Ethereum Bear Run – From May till now

But hope was still present, the Ethereum was persevering, and the crowd was priming up for the Ethereum 2.0 upgrade. The Ropsten dry run was a success – but it was not perfect. The bugs were critical enough that the developers were forced to delay the Difficulty Bomb for 2.5 months.

The community and the investments didn’t take too kindly to this. What happened were massive dumps that led to stETH losing its peg with ETH and trust with the people. Almeda Capital even resorted to dumping all the ETH to recover some assets.

Each new day came with new lows and new test levels. First, it was the $2k test level that soon became $1.7k, which within a span of a couple of days became $1.2k. On 15th June, investors attempted to rally ETH, hoping that $1.2k would be the new bottom.

As of now, it has crossed the threshold and is testing $1.1k.

What has caused Ethereum’s Price to drop?

After the collapse of TerraUSD, the entire crypto market entered a freefall. It created a chain reaction that prompted investors to question Stablecoins and pegged crypto assets. Soon, stETH lost its peg, creating sell pressure.

Bitcoin also hit unprecedented new lows that further aggravated the depreciation of the crypto market. Currently, Bitcoin is trading at near $20k levels.

Celsius Network, one of the biggest crypto lending platforms, had to take the brunt of the loss of Bitcoin. After reassuring the crowd (in vain) that everything was going to be alright, the crypto lender finally had to freeze withdrawals and token transfers. Nexo has even created a letter of intent, offering to buy Celsius’s assets. So far, nothing has been done about it.

Ethereum Price Prediction – Is it the right time to buy

The price dump is continuing even as we write this blog. The token has lost its key support at $1350 and has continued to find new lows.

Experts say that the last support resistance level that the token has to hold is $1,174. If it goes below that, the token might recover around the $870 mark. It would be a good time for investors to buy the dip. History says that whenever Ethereum has taken a downturn at such massive levels, it has flipped, and the investors have made massive gains.

It is possible that the same might happen this year once the market gets back on track. However, all that depends on how long this crypto winter will last. 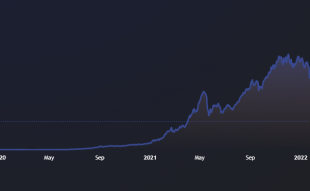 DeFi Crash – Is it the end of AAVE?