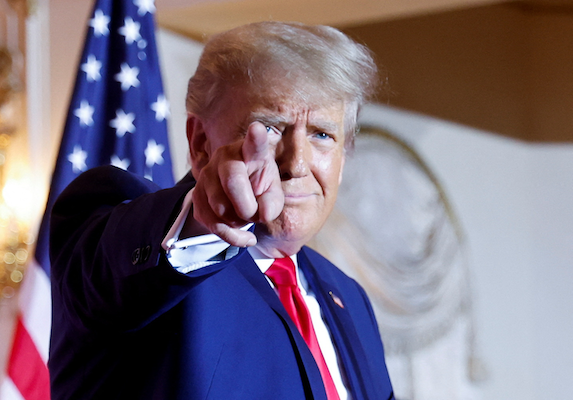 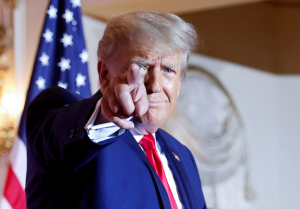 “I will probably have to do it again to make our country successful, safe, and glorious again,” Trump said at a campaign rally in Sioux City, Iowa. Donald Trump has officially announced his presidential candidacy for 2024, and this article examines the implications of his presidency for the crypto world.

Donald Trump: the unconventional president who has an impact on markets

Between 2017 and 2021, Trump was America’s 45th president. It was an eventful semester. The real estate billionaire defied almost every rule in the stiff-upper-lip United States presidency. He used Twitter to express his policy positions.

Barack Obama left office with the Iran nuclear deal as one of his masterful diplomatic moves, as well as a peace effort for his otherwise war-weary presidency. Trump was hesitant to take over the agreement, renewing sanctions against Tehran with a nod from Tel Aviv.

Trump reneged on key climate agreements, including the 2015 Paris Agreement. He confronted those with whom he disagreed. Many people criticized the former president’s unconventional behavior.

Except for those involved in cryptocurrency and traditional financial markets. The Bitcoin market appeared to flourish during his reign. During Trump’s four years in office, the price of Bitcoin increased by over 2,600%. It skyrocketed from around $1,100 to under $30,000, breaking into the mainstream. 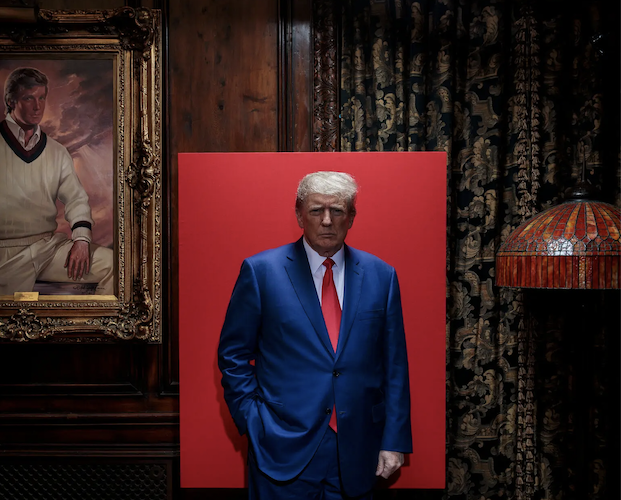 Meanwhile, US stock markets reached new highs during this time period, helped in part by stimulus spending in the aftermath of the coronavirus pandemic. For example, the S&amp;P 500 rose 20% in the days following Trump’s unexpected victory in November 2016. Following this, stock markets rose further. According to Bryan Lim of the University of Melbourne’s Business and Economics department, “all pre-election fears about a Trump presidency [were realized] – he [was] erratic and has promoted autarky.”

While Trump was unpredictable, the market found a way to profit in such a volatile environment, according to Lim. This is the result of capital’s application of the second reading of market efficiency, he added.

Trump was unconcerned about these perceptions. “All of those millions of people with 401(k)s and pensions are doing far better than they have ever done with increases of 60, 70, 80, 90, and 100% and even more,” he boasted in a 2020 address to Congress, according to Reuters.

He was referring to the impact that rising stock prices had on pension and retirement funds during his presidency. However, experts say that comparing the impact of politics on the broader financial market and, specifically, the crypto ecosystem is a very subtle exercise.

“Given his track record of implementing cash-based palliatives, the crypto ecosystem may have a better chance of long-term targeted growth under the former president,” Ben Sharon, CEO of gold-backed crypto platform Illumishare, told BeInCrypto.

Nonetheless, Trump has a complicated relationship with cryptocurrency. While he had an influence on markets, he never pretended to like Bitcoin. “I am not a fan of Bitcoin and other cryptocurrencies, which are not money and have a highly volatile and speculative value,” he tweeted in 2019.

“Unregulated crypto assets can facilitate illegal behavior, such as drug trafficking and other illegal activity,” Trump added. The tweet was later removed, as was Trump’s account, which was suspended in January 2021. Later that year, he described BTC as “extremely dangerous.”

In one way, it is normal for Trump to be on the side of the U.S. dollar, as that is tied with United States’ economical and political strength on the world arena.

However, if one thing  became obvious from his presidency, is that he is a pragmatic person who is not afraid to change course when conditions dictate so. As crypto has become more and more mainstream and relevant, it is probable that he will seek regulation, and ways to make the U.S. take a leading role in the crypto movement.

Contrast this to the current Biden administration which is foolishly going against the freedom principles embodied into the essence of cryptocurrency.

He is running for the Senate seat in Pennsylvania against John Fetterman. Oz has been forced to resort to ad hominem attacks, a Trump playbook trick. This could indicate a variety of things, including the former president’s continued eccentricity.

In that sense, a Trump victory in 2024 could herald the return of volatile separatist politics, which appeared to benefit Bitcoin and traditional financial markets during his first term. There are no simple explanations for why markets behaved in this manner.

“Given the first interpretation, were markets inefficient if they feared a Trump presidency at first but quickly came to embrace it?” Bryan Lim, an expert from the University of Melbourne, inquired.

“Perhaps yes, maybe no, depending on whether you believe ‘accurately,’ which necessitates consistency in investors’ beliefs.” The Trump administration has demonstrated that the second interpretation of market efficiency is almost certainly correct.”

If Trump triumphs then Bitcoin triumphs

“Given the limitations of the office, presidents have rarely had much influence on stock prices,” Lim said. “For better or worse,” however, “Donald Trump is no ordinary president.” During Trump’s presidency, Bitcoin experienced some impressive growth.

However, it was during the presidency of his successor, President Joe Biden, that BTC reached an all-time high of more than $69,000 in November 2021.

According to Ben Sharon, CEO of Illumishare, some voters will favor “crypto-savvy politicians irrespective of their party affiliations.”
“When investors realize the possibility of Trump’s return, digital asset prices may reflect this news in the mid-term, forcing some of the flagship cryptocurrencies to close this year marginally more positively than previously anticipated,” he said.

“If these forecasts are correct, Bitcoin may end the year above $30,000 and Ethereum above $2,000,” Sharon predicted.

Bitcoin has supporters on both sides of the political aisle, including Democrats and Republicans. Democratic representatives such as Ritchie Torres and Jim Himes have frequently promoted cryptocurrency.

“Crypto is the future,” Rep. Torres stated in a March opinion piece. “It may allow the poor to make payments and remittances without incurring long delays and high fees.” It may allow artists and musicians to make a living. This has the potential to challenge Big Tech’s and Wall Street’s concentrated power,” he added.

The same party applauds crypto-skeptics such as Senator Elizabeth Warren. Warren has criticized Bitcoin’s volatility, which she says is “exacerbated by its susceptibility to the whims of just a handful of influencers.”

She was referring to Fidelity’s decision to allow retirees to invest a portion of their savings in cryptocurrency. Democrats are widely perceived to be anti-Bitcoin. This points to the polarization that could characterize crypto policy under Democrats.

Republicans, on the other hand, are seen as crypto-friendly. Representatives Patrick McHenry and Bill Huizenga chastised the US Securities and Exchange Commission (SEC) in April for exceeding its mandate.

“We are especially concerned that the proposed rules could be interpreted to expand the SEC’s jurisdiction beyond its existing statutory authority to regulate market participants in the digital asset ecosystem, including DeFi,” they wrote in an open letter to SEC chair Gary Gensler.

The midterm elections were held on November 8, and Republicans won the majority of seats in the House of Representatives. The Senate, on the other hand, is divided along political lines. 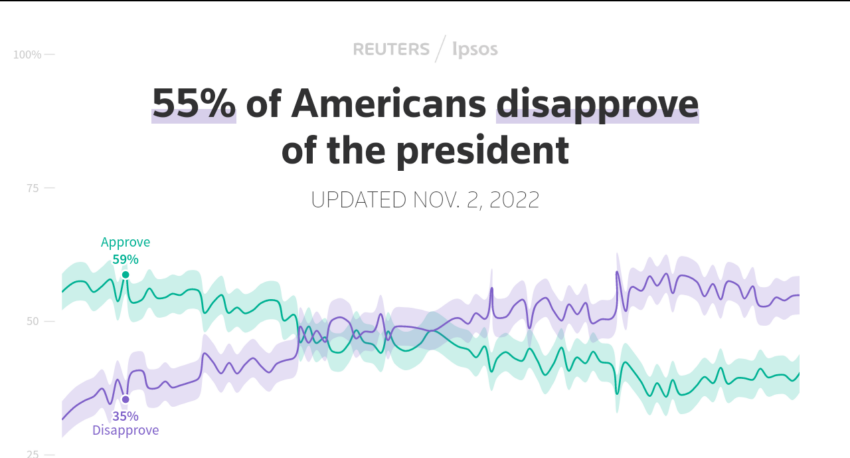 President Joe Biden’s approval ratings have plummeted as inflation has reached a 40-year high of 8.2%. According to a Reuters poll, 55% of Americans disapprove of the president. If Biden decides to run against Trump again in 2024, it appears he will have little chance. 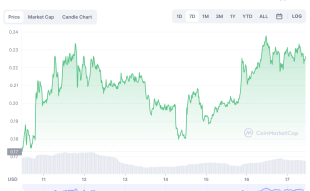