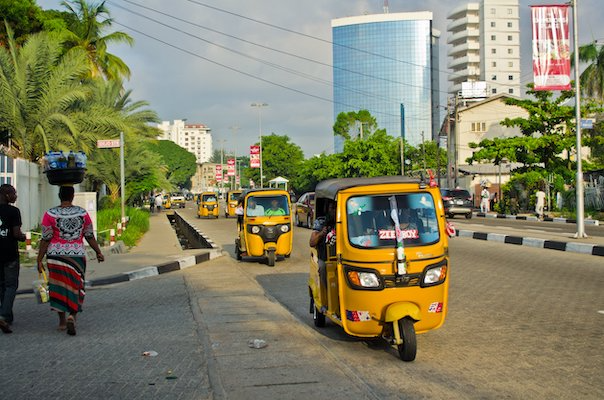 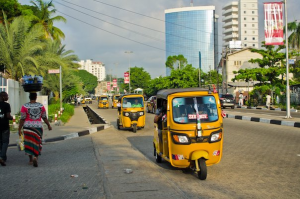 Nigeria’s central bank is looking to the country’s three-wheeler taxi drivers to expedite the adoption of the eNaira a year after creating Africa’s first digital currency, while authorities across the world closely watch its every move.

Drivers and passengers of the motorized rickshaws, locally referred to as Keke Napep, who use the eNaira are eligible for a 5% discount. It’s the most recent effort to revive the virtual currency, which has only attracted one in 200 citizens of the continent’s most populated nation.

Many Nigerians are confused by the central bank’s concentration on cryptocurrencies because they cannot distinguish between the eNaira, which is backed by the government, and cryptocurrencies. The massive promotion of the eNaira at the same time that authorities are cracking down on cryptocurrencies has drivers of Keke Napep, the most popular mode of transportation through the congested streets of Lagos and other cities, perplexed. Commercial banks are not allowed to transact with cryptocurrency exchanges, according to the Central Bank of Nigeria.

Hamed Lawan, a 23-year-old driver, questioned why they were asking for eNaira. “I thought the government stated bitcoin is evil,” you say. Nigeria was the first government in Africa to launch a central bank digital currency, or CBDC, with a goal of reaching the country’s nearly 40 million unbanked citizens. Along with expanding the tax base, policymakers planned to share in Nigeria’s multi-billion dollar remittances.

The outcomes thus far have been underwhelming. Although the eNaira may be stored in digital wallets and uses comparable distributed ledger technology to Bitcoin or Ethereum, Nigerians’ enthusiasm for cryptocurrencies does not extend to the central bank product.

Residents of Africa’s top oil producer have been drawn to virtual currencies as a safety net against inflation and currency depreciation, but the eNaira is seen as a stand-in for the problems affecting the continent’s largest economy and a sign of mistrust in the ruling class.

The government and the central bank both have a crucial role to play in educating Nigerians about the digital currency. According to Josh Lipsky, senior director of the GeoEconomics Center at the Atlantic Council, it is being closely watched by the more than 100 countries who are considering creating their own CBDCs because it is the largest economy to fully debut.

“The world is really interested in Nigeria’s idea”, he remarked. “The world is closely watching what Nigeria is doing, but the verdict is yet out, in my opinion.”

The emergence of thousands of cryptocurrencies, which are upending established payment methods and forcing central bankers to innovate in order to compete, gave rise to CBDCs. The goal of digital money is to make payments cheaper, safer, and more dependable while providing governments with weak financial systems with an alternative.
Tommaso Mancini-Griffoli, a deputy division chief in the IMF’s Monetary and Capital Markets Department, stated that while central banks normally do not strive for widespread acceptance, they do need to reach a critical mass of users. Authorities are focusing on the “sweet spot” since, according to him, excessive CBDC use might impair the flow of credit and possibly displace commercial banks overnight.

According to John Kiff, managing director of the CBDC Think Tank, the relatively low adoption up to this point—while not unusual for nations in the early stages of introducing a digital currency—may be due to insufficient incentives for commercial banks or improperly focused consumer messaging.

The central bank of Nigeria is optimistic. By next August, it hopes to have 8 million users on its digital platform after drawing in close to 1 million. According to Kingsley Obiora, the central bank’s deputy governor in charge of economic policy, all the eNaira needs is “a little push from the government.”

Adesoji Solanke, director at Renaissance Capital in Lagos, says that despite virtual currencies’ crash this year, their speculative appeal continues to draw Nigerians, who can also use them to get around the central bank’s foreign exchange regulations. Due to the central bank’s rationing of foreign money due to a lack of dollars, citizens have been forced to turn to the more expensive parallel market and cryptocurrencies.

The low adoption rates of the eNaira thus far are not surprising, according to Solanke, as it does not meet any of these fundamental use cases.

Nigeria ranks 11th in the world in terms of adoption of cryptocurrencies, according to blockchain expert Chainalysis Inc., despite the central bank of the West African country asking lenders not to conduct business with cryptocurrency exchanges last year.

The long history of naira depreciation can be seen in part in Nigeria’s interest for virtual currencies. The naira has been weakened by approximately 20% since 2015 in Africa’s largest economy, according to economist Tatonga Rusike of Bank of America Corp. Record interest rates and inflation at a 17-year high are adding to these worries.

That makes the eNaira difficult to promote, especially given that it competes with well-known mobile banking apps. Banks also have no motivation to promote the digital currency because funds in eNaira wallets are not treated as cash on a lender’s books, according to Babatunde Obrimah, chief operating officer of the Fintech Association of Nigeria.

The primary cryptocurrency users, millennials and Generation Z, are wary of the central bank’s plans at the same time. They have no interest in anything the regulator introduces because they perceive it to be unfriendly, according to Obrimah.

Since August, Nigerians without bank accounts can also open eNaira wallets by using their mobile phones and a so-called USSD code. Still, according to Adedeji Olowe, the founder of Open Banking Nigeria, the government may need to give more encouragement.

That opinion is shared by Central Bank Deputy Governor Obiora, who asserts that it might be a “game changer” if half of government wages were paid in eNaira.

According to Lipsky of the Atlantic Council, the fact that individuals who have adopted the eNaira are active users is a good indicator. Contrarily, hundreds of millions of people opened wallets in China during a test CBDC phase, but typical user engagement was quite low, he claimed.

The eNaira is still having trouble right now, especially in the poorest areas it is trying to reach.
eNaira, did you say? Another cabbie in Abuja, Adamu Alidu, stated, “I don’t even have a bank account, much less an eNaira account. “As for me, I know nothing about it.” 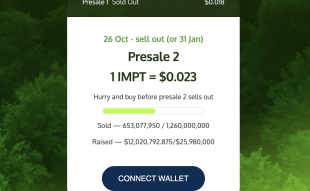 IMPT Presale Raises more than $12 Million — Should You Invest?

Join Our Telegram channel to stay up to date on breaking news coverage Early ...