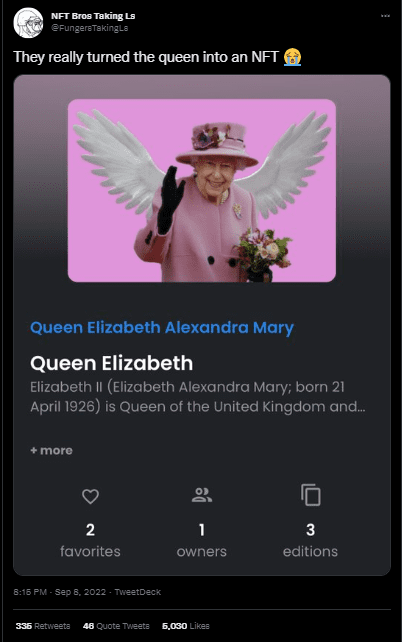 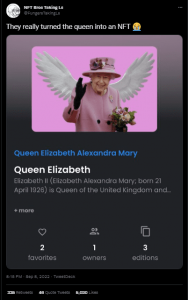 Elizabeth II’s death led to many crypto projects and coin initiatives taking advantage of the moment and stepping into the shitcoin-frenzy around the monarch’s passing away.

Queen Elizabeth II’s death led to worldwide mourning from world leaders and celebrities, helping the entire scenario gain momentum. This led to crypto initiatives and projects taking note and grabbing the opportunity as soon as they could.

The Crypto market witnessed more than 40 new Queen Elizabeth-related tokens and coins flooding the market, combined with hundreds of non-fungible tokens in the mix too.

Soon after the death of Queen Elizabeth II was announced, over 40 shitcoins flooded the markets. These coins were primarily created on the Ethereum and Binance Smart Chain.

The new tokens which launched on the decentralized exchanges on Ethereum and BNB Smart Chain included a variety of names around the monarch. Some of these names were Queen Elizabeth Inu, Save the Queen, QueenDoge, London Bridge is Down, and RIP Queen Elizabeth.

The price of the Queen Elizabeth Inu token gained the maximum gain. According to Dex Scanner, the cost of the Binance Smart Chain-based blockchain increased by 47,655% in the last day, pushing the price further to $0.0131016 at the time of writing.

However, the Inu token wasn’t the only one that rode the wave of the Queen’s passing and gained out of it. In less than a day’s time, one of the several coins gained a trading volume of $2.7 million in less than 12 hours.

What’s even more interesting is that coins like Queen Elizabeth Inu and Elizabeth have liquidity worth $17,000 and $204,000, respectively. This brings up the issue of the lack of a serious vision and plan of action behind the crypto project and a short-lived pump-and-dump scenario. This brings back the memories of the Squid Games token that flooded the market, inspired by the Netflix show, which eventually crashed and burned in October last year.

NFTs Not Left Behind

Shortly after the official announcement of the Queen’s passing away at around 6.30 PM in London, OpenSea and crypto exchanges were pumped with several newly minted Queen-themed non-fungible tokens and other cryptocurrencies.

The NFTs listed on OpenSea for auction included digital stamps with Queen Elizabeth’s profile, photographs of the Queen, and a pixelated Queen artwork with red eyes gleaming through.

Within the hours of the Queen’s death, the project named RIP Queen Elizabeth project went on sale on OpenSea with around 520 NFTs in the collection, while the other collection called, RIP The Queen Official got around 8,000 digital artworks under its ambit, with each artwork being uniquely different from the other one when it came to the eyes, mouth and backgrounds.

One of the most popular and ongoing projects related to the Queen is the QueenE, launched in July this year by Web3 builder Fabio Seva. The project aimed to launch algorithmically created NFT pieces of the Queen for the rest of her life. However, after the news of the Queen’s passing, the project announced that its current 73rd QueenE NFT auction would be its last.

On the NFT auction website, the creators wrote a eulogy for the Queen, describing her as “a strong woman, faced with a power and position that she never desired, but took in the hands and wielded with grace and fairness.” The final QueenE NFT sold for 2.73 ETH or $4829.18 at the time of writing, making it the most expensive piece of the collection.

However, with all the traction around Queen Elizabeth-related NFT and cryptocurrencies, there was a side of people on the internet, who found the entire initiative distasteful.

One of the Twitter users tweeted “insensitive crypto greed strikes again” directed at how crypto initiatives capitalized on a sensitive issue like this one.

Although, the launch of Queen Elizabeth-related cryptocurrencies and digital artwork can be taken in a good taste as a way to give tribute to the longest-serving monarch of Britain. 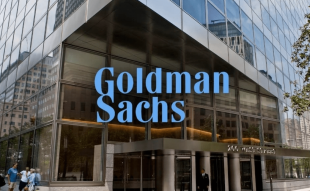 Institutions Are Bullish on Crypto. What do They Know That Retail Doesn’t?