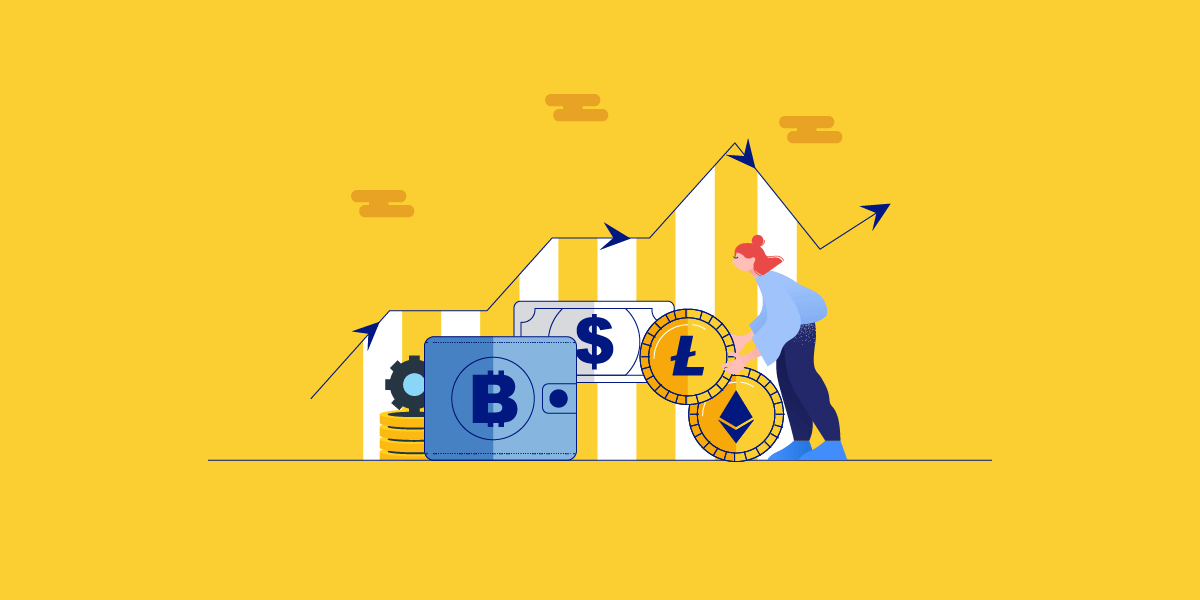 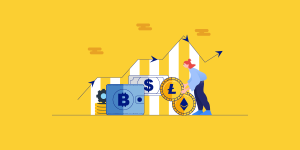 As October is coming to a close, a lot of cryptocurrencies have started seeing a noticeable price increase. Combine that with some exciting new opportunities, and there are plenty of coins with great potential to consider for investment in these final days of the month.

Ethereum is easily the second-most important project that was ever created in the crypto industry — the one that transformed it from a world of digital currency to a world of smart contracts, dApps, DeFi, metaverse, and all other products that people around the world use today. In the last week, the ETH price has surged by 23.27%, and in the last 24 hours alone, ETH has gone up by nearly 6%. Right now, its price is struggling, which started after it reached the height of $1630. After briefly breaching this level and reaching the height of $1,644, the token corrected to $1,618, which is where it sits at the time of writing. 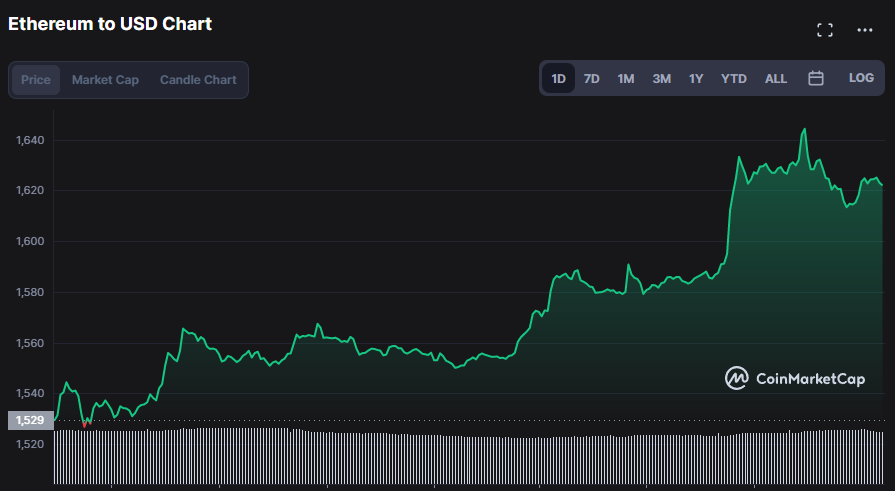 Ethereum recently completed the Merge, which finally moved it to PoS, which is something that the community has been anticipating for years now. But, due to the bear market, its price has not experienced the hype or the proper growth that was expected to follow.

D2T is a native cryptocurrency of a platform called Dash 2 Trade. The platform is meant to provide crypto investors and traders with all the tools needed to make smart, informative, and above all — profitable decisions. It offers things like social analytics, trading signals, exchange listing notifications, predictions, and more, all that each trader needs to know before creating a proper strategy and making the best possible move.

The project is currently in the middle of a presale, offering D2T tokens in exchange for Tether (USDT). Each token costs $0.0513 USDT, and right now, there are only 39.4 million D2T remaining. So far, the project has sold more than half of the supply meant for distribution, raising $3.19 million along the way.

Dogecoin (DOGE) is currently the best-performing cryptocurrency on the top 10 list, with a 24% increase in the last 24 hours alone. In the last 7 days, the coin has skyrocketed by 77%, and the main reason for this is believed to be Elon Musk’s purchase of Twitter. Musk has been a vocal DOGE supporter for years now, and last year, his support of the original memecoin launched DOGE through the roof. In April 2021, the coin went from $0.070 to $0.65 in a single month. 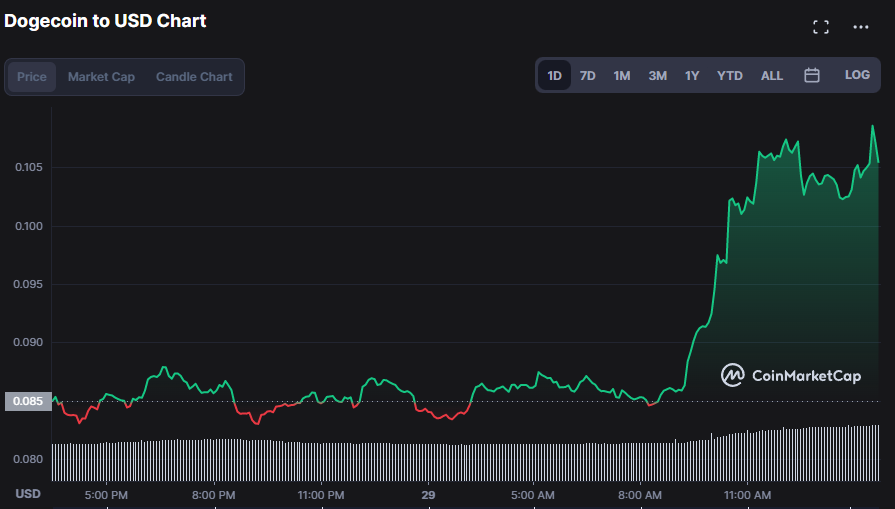 Now, Musk’s completion of the Twitter purchase launched the coin again, sending it from $0.059 on October 25th to $0.10 earlier today. At the time of writing, the coin’s price sits at $0.106, and DOGE is now officially the 8th largest cryptocurrency ba market cap, which currently sits at $13.9 billion.

Moving on, we have IMPT, which is a project that calls itself the “greenest cryptocurrency,” and that title already hints at what this project is all about. Essentially, its goal is to provide an impactful carbon offset program that users can participate in simply by investing into the token. In doing so, they will become a part of a large ecosystem that connects businesses and individuals with socially responsible brands, rewarding those who care for the environment and seek to reduce their carbon footprint.

The project is based on Ethereum, and it currently holds a presale where each IMPT token can be purchased for $0.023. So far, it has sold over 626 million units, and it raised $11.3 million, which puts it halfway towards its goal of reaching $25.9 million. The tokens are being sold quickly, and anyone wishing to participate should hurry.

Like Dogecoin, Shiba Inu (SHIB) is a popular memecoin that has captured the attention of the community ever since it appeared. While it is not growing as strongly as DOGE, it has still surged by 22% in the last 7 days and 12% in the last 24 hours alone, which puts its price at the time of writing at $0.00001223. The token also sits as the 13th largest cryptocurrency by market cap right now. 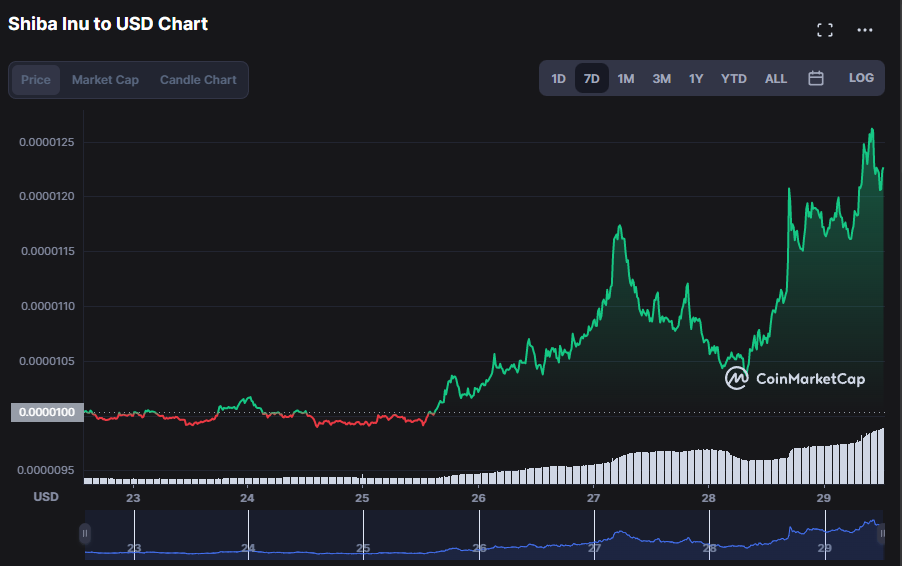 SHIB exceeded DOGE last year, even climbing above it in terms of ranking and market cap. Its price never came close to that of Dogecoin, of course, but the token was dubbed “DOGE killer” for a reason. Whether it can repeat this achievement at some point this year or in 2023 still remains to be seen, but anyone who wants a memecoin other than DOGE will likely not make a mistake by choosing Shiba Inu.

Finally, we have RIA — a native cryptocurrency of a project called Calvaria. This is a P2E battle card game set beyond the veil of death, as its official page reads. The project allows users to purchase battle cards and then enter duels with other players, upgrade their deck, and earn money along the way. The goal is to become the ultimate force on the battlefield and create the strongest set of cards.

RIA is also holding a presale right now, or rather — it is nearing its end, as it has already sold 50.2 million tokens out of a total of 60 millio, raising 603,904 USDT along the way. With less than 10 million tokens remaining, users are recommended to join the presale as soon as possible, as the tokens will likely not be available for much longer.

Out of all of the recommended tokens, D2T is likely the best opportunity right now. When it comes to others, they are each a dominant force in their own niche, be that memecoins, green coins, or metaverse coins. However, D2T offers a platform that provides something that is necessary for each trader and investor out there. This is a necessity, and as such, it is likely to be used by most, if not all, traders and investors.

With D2T token at the heart of it, this will be the cryptocurrency that will be used the most, and as such, it promises the greatest earning potential out of all listed projects. 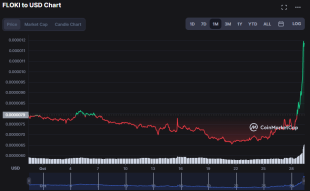